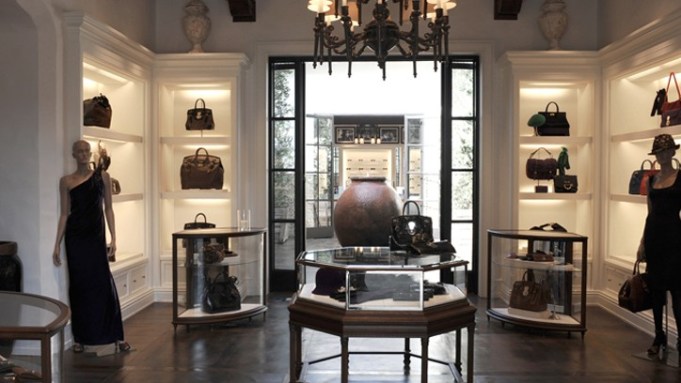 The designer, targeting a younger customer, is the latest fashion heavyweight to open on the trendy shopping strip here, once populated largely by local boutiques.

The 11,000-square-foot store, which launches today, was designed using Spanish colonial aesthetics and with a white California Mission facade, as well as Forties-era touches in the residential hacienda-style interior.

The space features 14-foot-high ceilings and floors of poured concrete and oak inset with Moroccan tiles. It is divided into 10 rooms housing different aspects of the brand’s blended collections. Steel French doors open onto an outdoor courtyard and a central water fountain surrounded by the interior rooms.

The furnishings are a mixture of Ralph Lauren home collection pieces and antiques — like a large crystal chandelier and a huge easel that houses a flat-screen TV — mostly found in Paris by Alfredo Paredes, executive vice president of creative services for the company’s store development and home design divisions.

“We feel the scale of the store represents the scale of the opportunity on this street,” said Charles Fagan, executive vice president of global retail brand development. “We’re looking to capture a different customer, someone who wouldn’t perhaps have known about the brand, or one who will see Ralph Lauren in a new way.”

The store is on the site of a demolished antiques shop. The Robertson location joins the Rodeo Drive flagship and three smaller boutiques in the Malibu Country Mart (women’s, men’s and Double RL) and one in South Coast Plaza in Costa Mesa, Calif.

Among other differences from the larger and more traditional Beverly Hills store, the Robertson unit spotlights the brand’s complete accessories collection, from handbags and vintage jewelry to men’s and women’s footwear.

“Accessories has softened a little of late, but in general has seen big growth for most companies,” said Wayne Meichner, Polo Retail Group president and chief operating officer. “We’ve been playing a lot of catch-up ­in that area. We’ve reacquired a lot of our licenses and have tried to develop them. We have dedicated space and are getting more serious and aggressive with our accessories presentation.” ­

The store is large for the street, and features 13 parking spaces in the rear, a luxury in Los Angeles real estate terms. About 9,500 square feet is dedicated to men’s and women’s collections, with the rest for children’s wear, which has a separate front entrance.

The store’s display of branded eyewear is second in size only to the Ralph Lauren flagship on Madison Avenue in New York.

“L.A. is an enormous market with a tremendous appetite, and a lot of foreign tourists, too, so it’s a great place to be,” Meichner said. “In L.A., as well as most urban markets where we already have a presence, we have to look for an intelligent way to expand.”

Lauren has a 10-year lease with an option to renew. Meichner said the company has high expectations for the Robertson store and expects little cannibalization of existing clientele — in the 6 to 10 percent range. The store will skew to a younger customer and one who is more locally based than the Rodeo Drive flagship, which sees more foreign shoppers. Meichner said the company anticipates that the Robertson unit will be in its top 20 percent in terms of sales performance.

There are 65 Ralph Lauren stores in the U.S. and more than 20 abroad, with the latest launch next week on Avenue Montaigne in Paris featuring an entire first floor dedicated to accessories. That will be followed this year by stores in Istanbul, on Bleecker Street in Manhattan, Qatar, Fillmore Street in San Francisco, a Double RL unit on Melrose Avenue in Los Angeles, and a unit in Dubai in March.

Robertson Boulevard is home to Kitson, Lisa Kline, Intermix, as well as newly arrived Chanel, among others,­ with Dolce & Gabbana’s D&G concept still to open this fall.

The street­ has seen a lot of changes in the past year. Australian sleepwear giant Peter Alexander has just set up shop in the former Waterworks space. Agnès b. is soon to vacate its space. Farther down the street, the building that houses Swedish streetwear brand WeAretheSuperlativeConspiracy and Tory Burch was just sold by Retail Management Group to New York-based Thor Equities for almost $15 million.

With seven years left on her lease, Tory Burch will remain in the existing space, while WeSC will exit the street at the end of its lease in April.

“Large brands are coming, but it’s helping the street because these brands are opening nontraditional, special stores,” said CB Richard Ellis vice president Jay Luchs, who has brokered many of the leases. “For example, Chanel sells about 70 percent accessories [on Robertson], whereas on Rodeo Drive they sell 30 percent accessories. Stores can come to Robertson Boulevard and use it for building or changing their image.”

With the influx of big-name tenants come big-time rent increases: on a stretch that once commanded about $15 a square foot, prices have risen to the $25 to $28 a square foot range. And not all locals are pleased. Though the area has teemed with paparazzi and media-friendly starlets for several years, some merchants said the street’s character has changed drastically, from homey and boutique-friendly to sterile and corporate.

“It will sabotage some of the businesses here,” Ross said. “I think it takes away from what makes Robertson special, from why shoppers come here in the first place.”

However, Ross himself is expanding within the Los Angeles area, including a location on Melrose Avenue several blocks from his popular Robertson store.

“What’s happening is that Robertson, which you could count on for unique designer clothing and interesting little boutiques, is now the same crap as the Beverly Center or any other mall,” said stylist Mark Alan Harmon, who owns Closetry, a few blocks north of what will be the new D&G store. “Overall, the impact is that people are not as interested in coming to the neighborhood because it’s the same thing as everywhere else, so why come to Robertson?”

Ralph Lauren’s Meichner, however, said the company is well aware of Robertson Boulevard and planned the new store in keeping with the local flavor.

“People will see Ralph Lauren clearly has a different approach,” he said. “We are not putting in formula-type stores that look like cookie cutters; we’re­ not turning it into a mall. You can be national, but as long as you have a unique approach that’s sensitive to the local landscape, it can fit well.”