The uniforms use a range of sustainable materials, and select pieces will be offered for sale to the public beginning today.

It’s time to wave the flag and get patriotic.

Today, 100 days from the start of the Summer Olympic Games in Tokyo, Ralph Lauren unveiled the Team USA Closing Ceremony Parade Uniforms and apparel collection for the U.S. Olympic and Paralympic Teams. The jackets, Polo shirts, jeans, shoes and masks are offered in classic silhouettes and a red, white and blue palette, but there’s a twist this time. The uniforms, which were manufactured in the U.S., also have a strong sustainability message.

As David Lauren, chief innovation and branding officer and vice chairman of Ralph Lauren, explained it: “The concept for the designs was started for an Olympics that were supposed to happen last summer. And the message last year was how it was going to be the most sustainable Olympics ever. They wanted all the sponsors and partners to really think about how green the Olympics could be, and how that could be a symbol of innovation and ingenuity.”

Then the pandemic hit, the Games were canceled and rescheduled for this July. “A year ago, we were trying to convince people that a certain level of sustainability was important, but now the world has radically changed and it’s no longer a ‘nice to have,’ or an opportunity to create a showcase of new kinds of innovations that the world will get inspired by,” Lauren said. 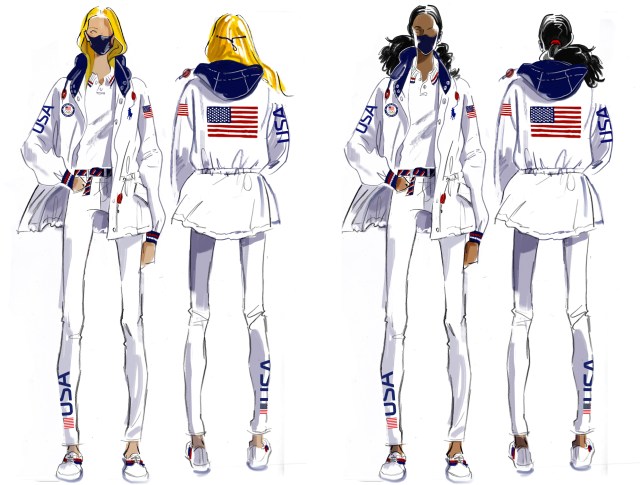 The uniforms use sustainable materials and are manufactured in the U.S.

Instead, following a year “marked by isolation and strife, this summer’s Games are a true testament to the resiliency of the human spirit and the universal power of sport to energize and unite the world. As we come together to celebrate and compete, we must also embrace our responsibility to protect the planet we all call home. As part of this, we are proud to continue to invest in and scale sustainability innovations — dressing our nation’s best and brightest athletes in timeless clothing that has been consciously created.”

Ralph Lauren worked with Dow to use its Ecofast Pure Sustainable Textile Treatment — a pre-treatment solution for more sustainable cotton dyeing that significantly reduces the water, chemicals and energy consumed — on the Team USA cotton products. In addition, the brand used Mirum, a leather alternative made from plant-based materials and agricultural byproducts, and worked with Natural Fiber Welding to create the Olympic patch that will be prominently displayed on the line.

The collection includes a white drawstring jacket with graphic details; a striped belt made from Repreve recycled polyester created from plastic water bottles; a classic white Polo shirt; white denim jeans with a Mirum back patch; shoes, and a face mask made from verified U.S. grown cotton.

Select pieces from the collection will be available for purchase by the public beginning today on the Ralph Lauren e-commerce site as well as in select Ralph Lauren and department stores and online at TeamUSAShop.com beginning in June. Prices include the Team USA Ceremony belt for $98, polo shirt for $125, jean for $195 and Jacket for $495.

Despite the postponement and the continuing questions around the event — including the fact that no spectators from outside Japan will be allowed to attend either the Olympic or Paralympic Games — David Lauren remains upbeat about the message that will be broadcast when the athletes come together in Tokyo on July 23.

“America is going to travel and compete and be set free and we’re going to see the kind of energy and excitement that we’ve all be waiting to feel,” he said. “It’s a moment where, as mankind, we can come together and say, we survived the biggest crisis of most of our lifetimes and we’ve won and we still have energy, excitement and passion about living.”

He expects that passion to be evident among the athletes, and Ralph Lauren is honored to be part of that. “I think our products will hold a whole new meaning because they’re part of this historic moment. They’re part of a symbolism of a reawakening and what the future can be.”

Lauren said that even though spectators from the States won’t be able to be there in person to cheer on the participants, he likened it to when people cheered from the windows every night during the start of the pandemic. “That was something none of us will ever forget, but this will be a different kind of scream and a cheer. It’s the same feeling of coming together. All these athletes on a stage is truly symbolic of what our world is about to be: which is open and free and energized and together.”

Lauren said that although the company intends to initiate marketing initiatives around the uniforms, “just putting it on the athletes, it comes alive. We will be doing advertising campaigns and marketing to bring the product to life through all the cool technologies that we’ve been playing with, from bitmojis to television, but nothing is as powerful as this moment. This is going to be a historic moment like no other. Even if you don’t care about the Olympics, it’s emotional medicine.

“When we dress people in Ralph Lauren, they are in many ways wearing the American dream, and when our athletes walk on a global stage, they are representatives of the best of America.”

One of those expected to be donning the Ralph Lauren uniforms in Tokyo in July is David Boudia. The diver has appeared in three Olympic Games already in the 10-meter platform and synchronized diving competitions, amassing an impressive four medals: a gold, a silver and two bronze. 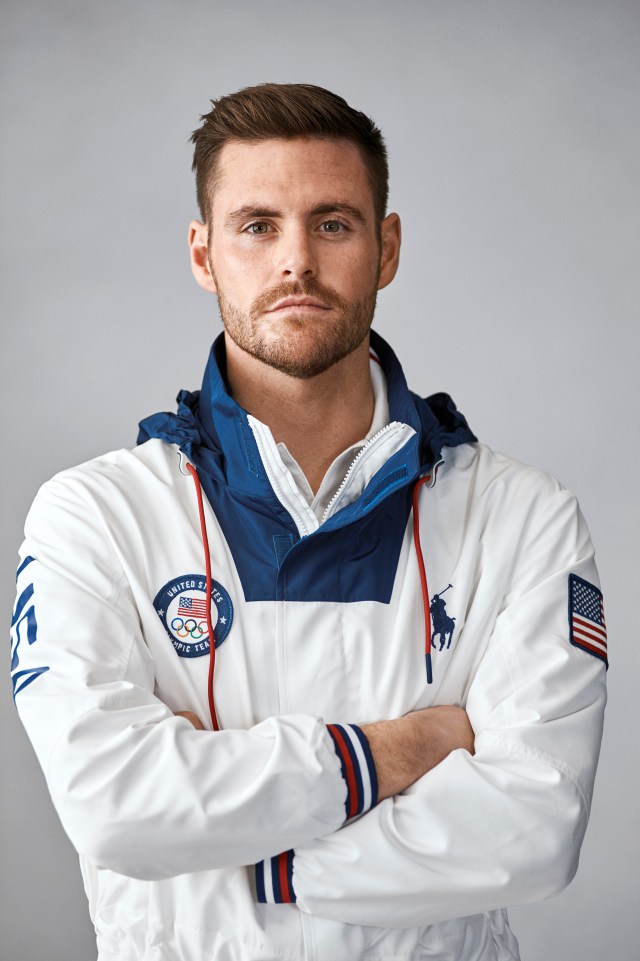 Although he has yet to punch his ticket to this summer’s Games, the 32-year-old Boudia is determined to be in Tokyo, but this time, in a different discipline.

“For three Olympics, I always had this craving and desire to go to the pool and get my goals accomplished,” he told WWD. “After 2008, I had a huge letdown not accomplishing those goals but I reset, and in 2012, won the Olympic gold and that carried me through to 2016. After about a year and a half off after the 2016 games, I realized, I still want to do this. And I happened to switch events. The three Olympics that I competed in were on the 10-meter platform and I switched focus for this Olympics to the three-meter springboard. And it’s kind of given me new life, a rejuvenation to train.”

Although he’s still working on perfecting his skills in the springboard, he continues to train to “figure out how to get better each and every day. And with springboard, it added a different challenge and new life to my career.”

During the pandemic, the father of three continued to train, taking his kids to the pool — “I had a key,” he said — and commandeering their backyard trampoline for him to practice his flips. And while it was hard to stay focused — and continues to be difficult with so many lingering uncertainties — Boudia managed to find the silver lining of the pandemic.

“if the Olympics had been going on, I would have been traveling every other week doing sponsor events, or media or diving events. Now everything is closed down and shut down so I’m able to go hike in the trails in the backyard and go to the creek and throw rocks, and picnic. When my kids rewind to 2020 and think about the pandemic, they’re not just going to think of all the hard and bad things that happened. They’re going to think that was an awesome time with Mom and Dad because we got to spend time with them and do all these fun, random activities together.”

But one thing that will be a challenge for Boudia is the fact that his family and supporters can’t be with him in Tokyo. “For the past three Olympics, I’ve had a big congregation come to cheer me on. For this one, we had the biggest one yet. We had 30 to 35 people already committed with lodging and tickets purchased and then everything canceled so they’re working through the logistics of how to get that back.”

But Boudia is not going to let that derail his dreams. “As an Olympic athlete, you’re there for a job. When I’m walking in, I acknowledge them in the stands, but I’m there to compete for an Olympic gold and my tunnel vision comes out. One of the sad parts is I’m not going to see them in the stands afterward. Every Olympics, we make team shirts, so I know where Team Boudia is. But I’m pretty sure we’ll have FaceTime after the event and they’ll all be cheering along.”

Boudia is also eager to don his Ralph Lauren uniforms on a global stage in Tokyo. Both he and the apparel brand have been involved with the Olympics since 2008. In addition, the company has helped Boudia and the other Olympians finance their journey to the Games, for which the diver is grateful.

“A lot of people don’t know that other countries are sustained by their government, but the United States is not that, so we’re all trying to figure out how to raise money to compete and Ralph Lauren is a huge supporter of United States Olympic Committee and they bring a lot of money to help athletes achieve their dreams,” he said.

So if Boudia is successful in his quest to step onto the springboard in the Games in July, will he finally be ready to hang up his swimsuit?

He’s not ready to make that decision right now. In fact, he revealed that he just tested positive for COVID-19 and is currently in quarantine. And he’s facing a qualifying event in Japan in early May that he needs to travel to in around a week.