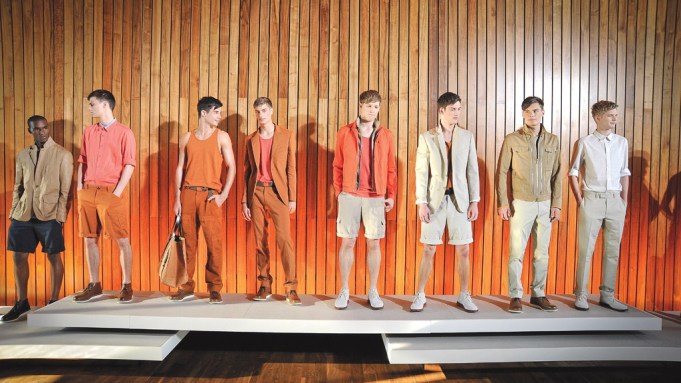 “I try on every piece. I have an average height, and I don’t think we should fit on a runway model,” reasoned the hands-on founder and chairman of Elie Tahari. “I think we should fit on a regular guy. I do clothes for a body that is a regular body, that everyone can wear. And I want to know that there’s a reason for me to buy it. If I don’t need it, why are we doing it?”

That real-world approach infuses the entire men’s collection, which emphasizes simplicity in silhouette married to a modern stance. There’s a sleek attitude to the brand, but comfort is always paramount to Tahari.

“I would say it’s more on the casual side than the dressed-up side. We do pants for men that are like sweatpants, but it’s not a traditional sweatpant. It’s got a narrow leg,” explained Tahari. “Sweatpants were for sweating in the past. Today, if a sweatpant has a great cut, you put something dressy on top and you can go out with it. We’re doing sweatpants that look cool. It’s all about feeling good but also about looking good.”

Tahari first launched his men’s sportswear collection in the fall of 2006, initially as a minor supplement to the core women’s business. More recently, the business has grown in importance, and the company is aiming to make men’s a key growth driver in the future.

Today, Elie Tahari men’s wear is wholesaled to about 120 retail accounts. Bloomingdale’s and Saks Fifth Avenue are the largest partners, followed by Macy’s, Lord & Taylor and a host of independent specialty stores. In Europe, the men’s collection is stocked in Galeries Lafayette, Printemps, Harrod’s and Harvey Nichols.

There are six deliveries of men’s wear annually, compared with 12 deliveries in the larger women’s collection. These include spring, Father’s Day, a summer-to-fall transition range, fall, holiday and pre-spring. The primary spring and fall deliveries offer about 140 styles, while smaller deliveries like Father’s Day encompass about 24 styles.

“Our Tahari customer is looking for quality pieces with a modern, updated aesthetic. We see a lot of our female customers who know Tahari women’s buying Tahari men’s,” said Tom Ott, senior vice president and general merchandise manager of men’s and home at Saks Fifth Avenue. “Printed wovens and outerwear are our strongest classifications season after season.”

This fall, Saks partnered with Elie Tahari on an exclusive leather capsule line, helping to fill a need in the luxury retailer’s leather assortments.

“Tahari has historically done very well with great quality leather styles at Saks, so we see this as an opportunity for growth,” noted Ott, pointing to designs like a slim suede shirt jacket in midnight blue and bottle green, a black motorcycle-style shearling jacket and a four-pocket lambskin field jacket.

Apart from wholesale, Elie Tahari men’s wear is sold at the company’s own freestanding stores, including 12 full-price units and 24 outlets. The company is contemplating opening a temporary men’s-only store next year. Men’s generates 10 percent of overall company sales for the Tahari brand.

Besides the core sportswear business, the men’s offerings have expanded to a number of licensed categories. Current licenses are Peerless Clothing for suits and suit separates; PVH Corp. for dress shirts and ties; Collezione for outerwear; Imperial for underwear and furnishings — with gloves and scarves to come next fall — and Colors in Optics for eyewear, which will launch in stores next year.

Other men’s license areas that Tahari sees future potential in include shoes, bags and watches.

Last month, the company showed its men’s collection at the Project trade show in Las Vegas, a first for the brand.

“It was great exposure to specialty stores and in general for marketing purposes. Several new accounts were added in the U.S. and Canada as a result of attending Project,” said Sandy Wax, president of men’s and special projects at Elie Tahari.

For fall 2014, the company will launch replenishment programs in suits and denim to boost those categories, said Wax.

Last year, Tahari updated its in-store shops at Bloomingdale’s 59th Street and the flagship Saks Fifth Avenue in New York. The renovations included new video screens, updated fixtures, backlit displays and furniture, including an orange Hans Wegner “Papa Bear” chair — a favorite of Tahari’s, who is a collector of midcentury modern furniture — in the Bloomingdale’s shop.

Tahari believes that men’s remains a work in progress but has the potential to become a major building block for the brand. “I think when we get our men’s wear where it needs to be, it will fuel a lot of our growth,” he noted.

Tahari would like to amp up the design factor in the men’s collections to bring it up to par with women’s.

“I think we can do a better job. I think the women’s design has been a lot cooler and younger and trendier than the men’s,” he acknowledged. “I think the men’s is going to catch up this year.”

Men’s wear was a secondary consideration at the company for much of its history, the designer conceded.

“We launched at a time when we owned factories in Italy and I had a house in Tuscany and men’s was thriving in Italy, obviously,” recalled Tahari. “Really, I did it for myself and what I would like to wear. We didn’t take it as seriously as we are taking it now. We were too busy with women’s wear. At the time we started, it was like a toy — we needed some men’s wear for our own stores and we were playing with it. But now, we are looking at it and thinking how to turn it into a big business internationally.”

Tahari see a cultural shift in the way men dress, making the category ripe for expansion.

“Men are ready to dress in fashion. When I was growing up, 40 years ago when I came to New York, men were not interested,” remembered Tahari. “I think now they are interested. Maybe it’s my perception. But I see more men open to new ideas in dressing.”

“People are into their bodies. They go to the gym, exercise and eat healthy. They are getting more educated. Naturally they want to pay more attention to how they look on the outside,” observed Tahari. “Of course, the inside is more important. But it’s all one thing — you have to pay attention to the inside and the outside. The world is smarter now.”

Moving forward, Tahari is buoyant about the road ahead. “I’m planning to go with the flow and let the light guide me,” said the designer.

Of his four decades in business, Tahari said he’s just getting started.