Rampage, the contemporary young women’s lifestyle brand owned by Iconix Brand Group, is ready to reveal its first apparel collection in collaboration with creative director Savannah Chrisley, the star of the unscripted series, “Growing Up Chrisley,” and the show, “Chrisley Knows Best.”

The new Rampage x Savannah Chrisley line is launching exclusively at Belk stores and on Belk.com on Oct. 30.

Chrisley was named Rampage’s creative director earlier this year and in her new role, she is involved in the entire creative and design process for the various product lines as well as seasonal campaign concepts. For now, the deal is for the fall season only.

“This is my first major role, which has been so exciting. At first it was a little nerve-wracking, but the entire team at Iconix and Rampage just made me feel so welcome and so at home,” the 22-year-old Chrisley said in a telephone interview from her home in Nashville. “They really have helped me along the way. It’s just been so much fun because, in a way, it’s been all about me. They’re very open to listening to what I want.”

A few years ago, Chrisley designed a casual loungewear line but it was short-lived. “It was fun, not everything turned out how I wanted it to. It wasn’t the best partnership,” she admitted.

She said when Rampage came along, “It was the perfect fit because Rampage is what I am.”

“It’s what I wear every day,” she said. She explained that the deal came together pretty organically. “My agent was involved and thought it could be a great fit,” she said. She brought her dad, Todd Chrisley, along for the first meeting in New York. “All of our views aligned and we saw Rampage going in the same direction. We both had the same hopes and dreams for this brand,” Savannah Chrisley said.

The way she works with the Rampage team is she’ll go out and shop and look at what’s out there. “I like to critique a lot of things. I would get pieces of clothing [in a store] and say ‘This doesn’t fit right, or I don’t like the pattern, or I don’t like the texture or the fabric.’ It was a lot of research, and I came to them with things that I like and things that I didn’t like,” Chrisley said. For example, she has a longer torso and it’s hard for her to find a bodysuit that fits properly. “Fit was a big, big thing for us, and I think everyone will be so excited with the way things fit and look. I know I’m excited.”

She described her aesthetic as similar to that of Rampage’s. “It’s bold and it’s feminine, and that’s who I am. I like to make a statement but at the same time, I like to keep it cozy and fun, and that’s possible to do. In this day and age, being fashion forward is a huge deal, especially with social media. I want clothes that make me feel good. I feel like we did a great job with this line.”

“We have so much fun stuff. We have plaids, florals, leopard, snakeskin. We have so many different patterns and color palettes. It’s a good variety. We go from a maxidress to bodysuits to loungewear, denim, graphic T-shirts. We literally have It all,” she added. There are about 15 to 20 styles in the line and most of them come in a few different patterns. “There’s something that will look good on everyone.  I am so pleased with the way it turned out. We had our photo shoot, and the denim I’m obsessed with. It fit like a glove. It had the perfect amount of stretch. It was so flattering,” she said.

Chrisley said she’s in touch with Rampage all the time, and they talk on the phone, send texts and e-mails back and forth. She comes to New York about once a month. “When I’m there, all day it’s full. I love it, and it’s so much fun.”

She believes the line will reach a wide demographic. “It’s definitely for the more youthful crowd. But at the same time, we have pieces that will work for everyone. There are certain jackets that my mom loves, even my grandmother,” she said. She noted that one of her favorite looks is the jogger sweatshirts — “My mom is already obsessed with them.”

Chrisley said she plan to wear the Rampage clothes on her reality TV show. “This definitely gives me very fashion-forward pieces to wear while filming, and very comfortable pieces, as well. It gives me a wide variety to play with and showcase the line,” she said. Chrisley’s role as Rampage’s creative director has been documented on the latest season of “Growing Up Chrisley,” and will also be featured on upcoming episodes of “Chrisley Knows Best.” Chrisley has appeared on “Chrisley Knows Best,” since she was 16 years old. “It’s going strong so we’re extremely blessed,” she said.

It’s no secret there’s a lot of drama going on with the Chrisleys among the alleged tax evasion, extortion and a sex tape that has rocked the family. 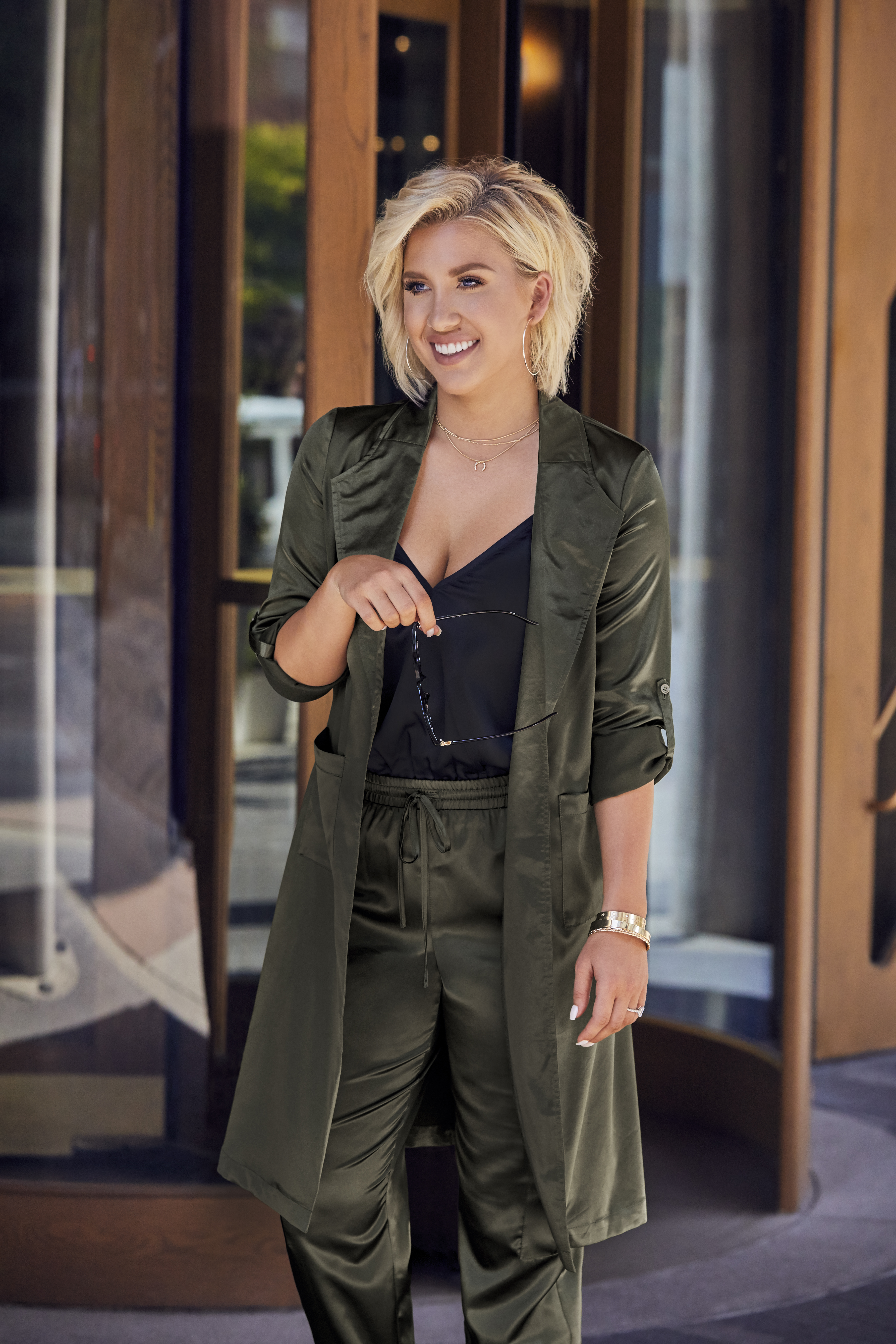 Paige Richardson, vice president, division merchandise manager, women’s contemporary brands at Belk Inc., said this was the first time Belk is carrying Rampage apparel, but they have carried Rampage Shoes for a long time. “We are constantly looking for new ways to surprise and delight our customers with both our product assortment and the customer experience. This partnership felt like a fresh and fun way to do just that,” she said.

According to Richardson, the collection will sit with their Young Contemporary and contemporary brands, such as Jessica Simpson and William Rast. “While it’ll be near other youthful collections targeting the young at heart, the design is bold and feminine and will have a wide appeal,” she said. She anticipates that the bestsellers will be the faux fur jacket and the animal print pieces, “without a doubt.”

“These pieces are spot on with trend this season, while still feeling like timeless wardrobe staples that our customer loves,” she said. “Savannah’s authentic sense of style resonates with our customer. The products are trendy and fashionable with a slight edge, which is currently a white space in our young assortment.”

She said Chrisley has a huge social following and fan base that she will leverage to promote the collection, Rampage and Belk will also market the line, including a launch party Belk is hosting for Chrisley in her hometown store in Franklin, Tenn., on Nov. 5.  The event is open to the public so customers can meet Chrisley and buy pieces from the collection. The line will be carried in 25 Belk stores, and the full collaboration will be on belk.com and the Belk app.

While the Rampage x Savannah Chrisley apparel collection is exclusive to Belk, other categories including footwear and accessories are available at other better department stores in North America.

Chrisley is also featured in the brand’s ad campaign, that was shot in Nashville at the Thompson Hotel by Trevor King, and styled by Gina Donnelly. She plans to share custom content with her more than 3 million followers across social media.

Bob Galvin, chief executive officer and president at Iconix Brand Group Inc., said, “Savannah has been a great partner for Rampage as we work together to relaunch the brand’s apparel collection and bring the brand to a new generation.”