Rebecca Minkoff Launches Sportswear With a Touch of Liz Taylor

Rebecca Minkoff is determined to get it right when it comes to sportswear. 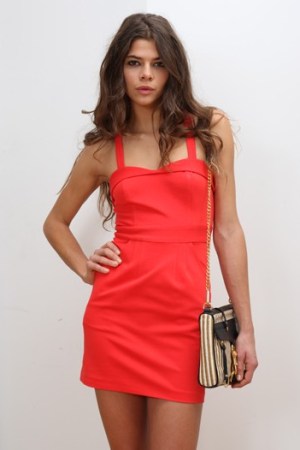 Rebecca Minkoff is determined to get it right when it comes to sportswear.

This story first appeared in the October 30, 2008 issue of WWD. Subscribe Today.

Although the New York-based designer’s handbag collection remains a consistent bestseller in 300 specialty stores, apparel has been another story. After about four years at retail, Minkoff closed her contemporary line in 2005.

“I was a one-woman show and I couldn’t handle it all myself,” she said. “It became too much for me to do bags and clothes.”

Believing she would eventually get back into apparel, Minkoff said she waited until she had a stronger infrastructure to support a bigger business. Then, her friend, Los Angeles-based celebrity stylist Ilaria Urbinati, stepped in, hoping to collaborate on the design of a line.

When Urbinati was in New York for a visit, the friends sat on the floor of Minkoff’s apartment and put together a collection of tailored double-knit cotton dresses, supersoft leather jackets, brocade trenchcoats with leather piping, high-waisted pencil skirts and low-cut blouses.

Minkoff said they were inspired by Elizabeth Taylor in the Fifties and the darkness of the 1982 film “Blade Runner.” It was also important, Minkoff said, to incorporate strong hardware and details seen in her handbags — such as the gold buttons on a blouse and the leather panels on a silk top. The collection is jacket-heavy, which was also important to Minkoff.

“There are days where I don’t like my outfit, so I just throw on a jacket and feel like I have a better look,” she said.

Urbinati agreed: “I love that the trenchcoat is so beautiful that it can be worn with a dress on a red carpet, which my clients will love.”

In addition to being a stylist, Urbinati owns the Los Angeles-based specialty store Confederacy, which carries Minkoff’s handbag collection as well as designs from Roland Mouret, Proenza Schouler and Etro.

“With Ilaria’s background and my design experience, it was a no-brainer for us to collaborate,” Minkoff said.

Launching for spring, the first collection will be sold exclusively at Confederacy and on rebeccaminkoff.com. That will allow the partners to test the line before opening it up to wholesale, Urbinati said. After becoming available to high-end specialty store buyers with the fall line, the collection will be based in Minkoff’s Manhattan showroom at 33 West 17th Street. The handbags will continue to be based out of the Cynthia O’Connor showroom at 141 West 36th Street.

“I credit Cynthia with a lot of the success we’ve had with the bags,” Minkoff said. “But I really want to keep a close eye on the clothing and I don’t want it to be everywhere. I want it to be special, exclusive and in demand.”

The Rebecca Minkoff contemporary sportswear line is manufactured in New York, which Minkoff said she will always do. It wholesales from $70 for a zip-down racer-back tank to $335 for a trench. She said she expects to reach about $2 million in first- year sales volume at wholesale.