Reebok has been doing things a little differently since launching its “Sport the Unexpected” campaign earlier this year. In March, the footwear and apparel brand owned by Adidas released the first of three short films entitled “Storm the Court” and held a runway show in Shanghai, but today, it turns its attention to product with the launch of a sweepstakes for its unconventional Club C-inspired collection designed in collaboration with former skateboarder Jimmy Gorecki, embroidery expert Brian Blakely and textile artist Uzumaki Cepeda.

The Reebok Club C, one of the brand’s iconic footwear styles, is the focus of the collection of apparel and accessories that is being made available to consumers through a sweepstakes on the Reebok Classics Instagram site starting today.

Cepeda, the Bronx-born Dominican artist who resides in Los Angeles, made a blue faux fur sneaker tassel for the Club C and earrings designed to complement the piece. “I was just trying to have fun with it,” she said. “I wanted to make business shoes less serious and more fun. The earrings are something I always make so I felt like I had to throw that in there because it’s my signature.”

Uzumaki, which means spiral in Japanese, found her artistic voice after moving to Los Angeles, and there discovered the magic of faux fur which she applied to sculptures, artworks and furniture. 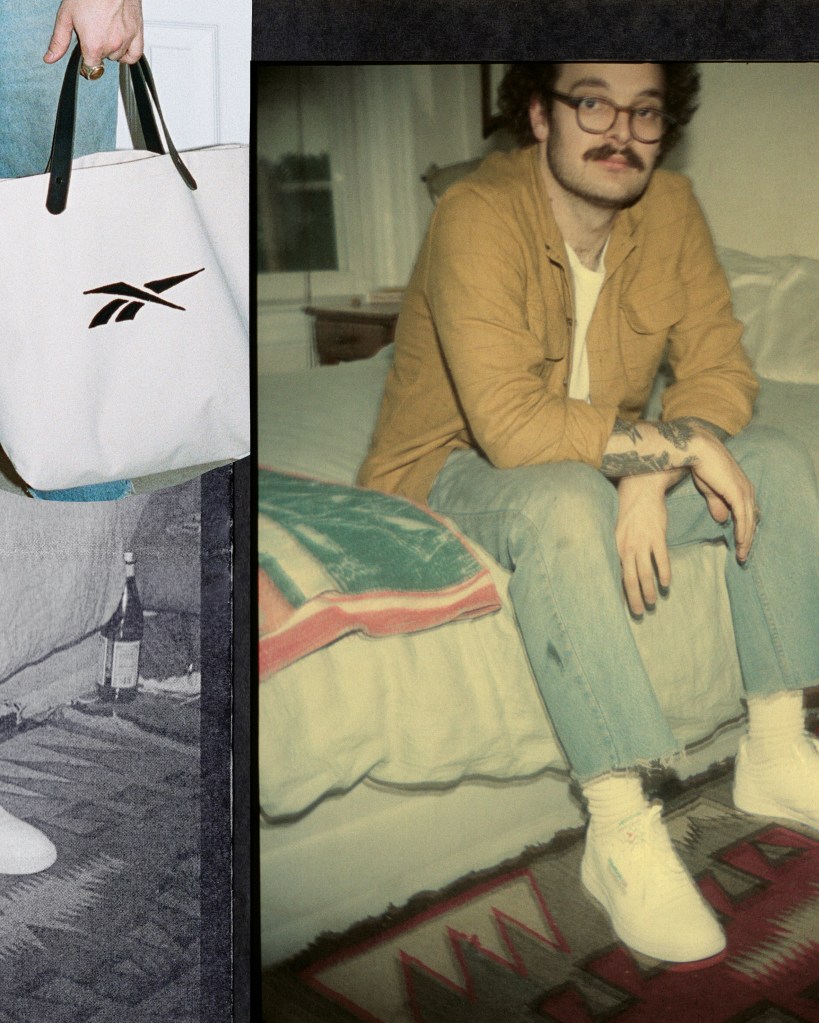 She felt “honored” to work with Reebok with whom she’s had a connection since early in her life. “I’ve always associated Reebok with hip-hop [and] viewed the brand as very cool growing up.”

Gorecki also saw the hip-hop and skateboard connections of Reebok. The former pro skater was part of Pharrell Williams’ Ice Cream skate team in the mid-Aughts, which received clothing and footwear from Reebok. Gorecki said he “would occasionally swap Ice Cream’s for Club C’s if I needed a change of pace.”

The Philadelphia-born creative behind the JSP apparel collection produced a tie-dye sweatsuit in Los Angeles for the Club C-inspired collection. The co-branded outfit nods to his original JSP designs that are more on trend now than they were when they launched six years ago. “We were really half a decade ahead on this particular trend,” he said. “I love the all-white shoe, but I feel like your clothes should go for the complete opposite.”

Blakely utilized his embroidery talents to make a bag to carry the Club C sneakers. “It’s hard when you’re working on a pair of shoes, [but] the bag came as a no brainer to me,” he said. The hand-embroidered tote is an oversize, classic utilitarian style with leather handles and an embroidered Reebok logo.

The 26-year-old New York City-based artist learned embroidery at Knickerbocker Mfg. Co. in order to write his name on the back of a jacket and went solo in May 2017. He adds Reebok to his long list of past collaborators that includes Barneys New York, Calvin Klein, Kith, Carhartt WIP, Billionaire Boys Club, Madison Square Garden and A$AP Rocky, who he worked with on wardrobe pieces for the rapper’s Testing album.

Reebok kicked off its “Sport the Unexpected” campaign to combine performance and lifestyle. Prior to this launch, the brand tapped Victoria Beckham and Pyer Moss for collaborations, and turned to celebrities Cardi B, Gigi Hadid, Future, and actresses Danai Gurira and Nathalie Emmanuel to front its campaigns.