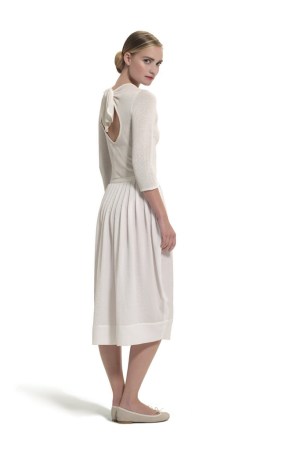 The 18-piece collection is inspired by dancers’ clothing and was designed by Emilie Luc-Duc, who worked with Anne Valérie Hash and is now creative director of the French brand Rodier.

It features tied and draped tops, corset-like knitting, and a color range of powdery pastels. Retail prices range from 200 euros for the tops, or $254 at current exchange rates, to 420 euros, or $534, for dresses. It will be available on Nov. 28 on the brand’s e-shop and in a selection of Repetto shops starting Dec. 5.

“After ballet flats and leather goods, [ready-to-wear] was important to complete the silhouette,” said Repetto chief executive officer Jean-Marc Gauchet. He insisted on the consistency of the brand’s positioning on dancing. “We see a big enthusiasm for ballet. Dance classes for instance are so packed in Paris that it is hard to find room in a class.”

Gauchet said he expects the company to grow by over 20 percent this year. While traditional ballet flats and heeled styles are still the biggest category (400 references are released each season), bags and small leather goods now represent 10 percent of the company’s business. In addition, the first Repetto fragrance, whose license is held by Inter Parfums SA, is set to launch in July 2013.

The company inaugurated last week a 37,675 square-feet extension of its Dordogne, France-based factory. “We have been limited by our production capacity so far. The new extension will allow us to triple our production,” Gauchet said. The plan is in place to hire 150 new workers.

The bigger facility will put the company in good shape to continue its global expansion, according to Gauchet. Later this month, Repetto will debut standalone stores in Dubai and Seoul, South Korea. The brand already counts 45 standalone units in Asia. Gauchet is also plotting the first standalone store in the U.S. in 2013, provided he finds the right location, preferably in SoHo.

Two new stores are also to open in December in France — in Aix-en Provence and on Rue Saint Honoré in Paris. “We are opening [Saint Honoré] while we revamp our store on Rue de la Paix.” He said the Rue de la Paix store would double in size and reopen in March 2013. “We had to make space for ready-to-wear,” he said.