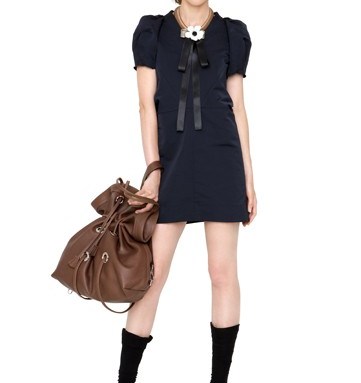 3.1 PHILLIP LIM: “Fall was about rock ’n’ roll. This is what that girl would be like on the beach,” said Phillip Lim. “She would be a pirate.” One who dresses, of course, with the casual-cool polish for which Lim’s best known.

ADAM LIPPES: A lineup of easy shapes with soft draping and details such as rope embroideries and wrapped and painted chains.

ANNA SUI: “Give the customers what they want” is Anna Sui’s approach to resort as she offers plenty of signature looks with an Eighties vibe.

AQUILANO E RIMONDI: Tommaso Aquilano and Roberto Rimondi blended a turn-of-the-century influence with a Sixties vibe and the femininity of the Forties.

AZZARO: Showing during couture week in Paris, Vanessa Seward delivered a sexy lineup of dresses, many with intricate pleating details, which should please her clients perfectly.

BADGLEY MISCHKA: Mark Badgley and James Mischka are inspired by Buenos Aires socialites of the Fifties. That translates into ruffles, flounces and dressmaker details.

BEHNAZ SARAFPOUR: For resort, Behnaz Sarafpour did a sophisticated version of nautical in such looks as a two-toned, glazed-silk wrap dress, a map-of-the-ocean print dress and a group of rope-inspired necklaces and bangles.

BETSEY JOHNSON: The collection reflected the designer’s always bright and upbeat sensibility with Pop-inspired T-shirts, a tutu skirt with a jacket and rock-star leggings in bold colors.

BURBERRY PRORSUM: Keeping true to his modern version of the house’s story, Christopher Bailey turned out a youthful cruise lineup for Burberry Prorsum.

CALVIN KLEIN: Francisco Costa went too far with the clothes in a season endlessly touted as all about dressing for reality — nearly every piece was transparent.

CATHERINE MALANDRINO: The lineup is about joy and femininity, with fluid silk and georgette dresses, draped jersey skirts and print silk shorts.

CAROLINA HERRERA: Ladylike chic is what one expects from a Carolina Herrera collection, so it was hard to decipher what the designer was trying to say with her abundant use of hardware.

CELINE: The Phoebe Philo era at Celiné has begun. And in its first collection at least, for resort, it reveals a very different side of the designer than that which made her Chloé such an “It” girl favorite.

CHADO RALPH RUCCI: The designer gave his ladies lots of neon brights in short, intricately detailed looks, such as a pieced-together tunic and skirt.

CHLOE: Hannah MacGibbon continues to channel a retro cool vibe with a charming lineup of Forties-flavored sportswear — seen through the prism of the Seventies.

CHRIS BENZ: The designer turned out a collection inspired by Palm Beach and a desert mountain range.

COLLETTE DINNIGAN: Inspired by the Mediterranean, particularly the Greek island of Santorini, Collette Dinnigan turned out a tight lineup filled with vibrant bursts of color and such styles as flirty print silk dresses.

COSTUME NATIONAL: Resort is all about travel, and this season Ennio Capasa went on a journey through the desert.

D&G: With “Gossip Girl” on their minds, Domenico Dolce and Stefano Gabbana targeted the young social set with a soupcon of class and sass.

DEREK LAM: This is dedicated to Rihanna,” said Derek Lam. By that, the designer means he channeled a Caribbean vibe, punched up an edgy, urban and seriously sexy notch.

DIANE VON FURSTENBERG: Diane von Furstenberg sent her girls packing to Brazil and neighboring lands — “from disco in Rio to polo in Argentina” — in a collection that was fun, feisty and oh so hot.

DKNY: In a nod to the Eighties, Donna Karan sent out a witty and upbeat collection.

DOLCE & GABBANA: Domenico Dolce and Stefano Gabbana went back to their roots for cruise, updating iconic pieces such as the bustier dress and sexy jeans.

DONNA KARAN: “Manhattan Tango” is a handle that grabs you. And one that perfectly captures Donna Karan’s beautiful resort collection.

DOO.RI: For Doo-Ri Chung, resort is all about presenting an easy, wearable and salable collection.

DUSAN: The collection took its cue from tailored men’s wear, softened, the designer said, by “precious fabrics and feminine pieces.”

EMILIO PUCCI: Creative director Peter Dundas carried over the energetic vibe of his debut fall collection, but was inspired by the sea, sailors and the sun for cruise.

GILES: Giles Deacon played with both fluid and structured silhouettes adorned with rubber zips and enamel buttons, and created drapes, tucks and ruches on pretty dresses inspired by flower petals.

GIVENCHY: For Givenchy’s pre-spring collection, Riccardo Tisci set off for North Africa and melded its exotica with the hard Goth glamour for which he is known.

HELMUT LANG: Creative directors Michael and Nicole Colovos were inspired by the concept of decay, which they channeled via coated and distressed fabric treatments.

ISAAC MIZRAHI: “Resort is a season people expect to be excited about,” said Mizrahi during an intimate showroom presentation — and there were lots of mouth-watering looks.

ISSA: Daniella Helayel was inspired by the tropical waters and palm trees of Tahiti, resulting in a collection consisting mainly of color-blocked silky caftans, embellished cover-ups and printed swimwear.

JASON WU: You wouldn’t have guessed it from Jason Wu’s collection of relatively simple uptown wares, but he was inspired by the fabulously eccentric Iris Apfel.

KENZO: For Kenzo, Antonio Marras took inspiration from the Morocco of Bernardo Bertolucci’s movie “The Sheltering Sky,” expressed in a palette of sand shades, army greens and bedouin blues.

LANVIN: Aloha! Alber Elbaz’s spring collection for Lanvin is a delightful mix of the exotic and chic. His “accidental tourist” gathered up fashion gems from Tahiti, Romania, India — you name it — and mixed them with her everyday wardrobe.

LELA ROSE: Lela Rose’s resort collection is rich in color — deep blue, hunter green and red — as well as with Japanese-inspired prints and details such as origami folds and cutouts.

LOUIS VUITTON: Marc Jacobs is still obsessed with the French coquette at Louis Vuitton, and for cruise, she’s headed on safari or frolicking in Saint-Tropez.

MARC JACOBS: A little bit Rio and a whole lot of over-the-top fashion. That’s Marc Jacobs’ approach to resort, which he renders in an elaborate collection vibrating with color, prints and endless embellishment.

MARNI: Ladies Who Lunch? That tony set was among Consuelo Castiglioni’s inspirations for Marni cruise. But instead of going prim, the designer worked an uptown-downtown mix with a dose of cartoony overstatement

MATTHEW WILLIAMSON: Matthew Williamson takes his city girl on holiday with a collection full of bold prints and beading, which have become part of his DNA.

MAX AZRIA:  The collection was a bohemian dream of draped caftans and tunics in weightless fabrics.

MAX MARA: Max Mara’s lineup, inspired by blue and all its tonalities, spotlights a clean, modern silhouette suitable for urban life as well as for the country.

MICHAEL KORS: Michael Kors is a true resort kind of guy, but he knows that these days, clothes have to do double duty. Thus, his turn toward what he called “a sleeker, more streamlined, more urban resort than usual.”

MIU MIU: Miuccia Prada continued the beachy vibe of her main collection, but lightened things a notch, not just in color but in mood.

MONIQUE LHUILLIER: The designer is sticking to what she knows best, and that’s beautiful and dramatic eveningwear and cocktail numbers.

NAEEM KHAN: Naeem Khan is reining things in, but there is still plenty of glitter and glamour. “I want to give women real clothes they can buy when they want to wear them,” he said.

NANETTE LEPORE: Nanette Lepore was inspired by an island escape, which she translated into flirty dresses, embroidered shorts and silky caftans.

NARCISO RODRIGUEZ: For resort, Narciso Rodriguez finds the perfect balance between his sensual and sporty sensibilities.

NICOLE MILLER: Always one to take a modern approach to design, Nicole Miller based her collection on digital prints.

OSCAR DE LA RENTA:  De la Renta went both ways, literally — the first half a delightful, if sometimes too referential, nod to the rue Cambon, editorial right down to the adorable bow-tied lace anklets, and the second, a more maturely rendered lineup of the designer’s classics.

PRADA: Surf’s up in the city, and it looks great. For her resort collection, Miuccia Prada infused high style with a beachy attitude.

RICHARD CHAI: According to Richard Chai, his girl is “never too lady,” and he strikes the perfect balance, infusing lighthearted prints with a tough edge.

ROKSANDA ILINCIC:“I was inspired by the idea of transforming cocktail and evening dresses into something more approachable in terms of fabric,” said Roksanda Ilincic.

SONIA RYKIEL: Going back to her roots, Sonia Rykiel created a cruise collection that was a fun throwback to her Eighties classics.

STELLA MCCARTNEY: The designer mixed the whimsical and the sophisticated and toyed with volume and shape: Scribble-print cotton organza trenches morphed into dresses when belted at the waist, and blouses dropped down to the knees thanks to invisible snaps.

THAKOON: The buzzword for Thakoon Panichgul this resort season? Texture.

TULEH: Bryan Bradley was inspired by the music of Nina Simone, resulting in a lineup of beautiful silk flirty dresses in dreamy floral prints.

VERA WANG: Vera Wang, who’s known for her dark, artistic looks, opted for pops of color and new textures and proportions in a light, airy collection of separates.

VERSACE: Vibrant colors, flashes of metal, color blocks and Polynesian floral motifs are just a few of the elements Donatella Versace tossed into the mix for Versace cruise.

VIONNET: After researching Madeleine Vionnet’s draped world, newly minted creative director Rodolfo Paglialunga set out to offer his own take for the comeback of the storied house.

VPL BY VICTORIA BARTLETT: Victoria Bartlett put the focus on liquid, layered silhouettes in her resort collection, underscoring the all-about-ease mentality at the core of her VPL line.

YEOHLEE: Yeohlee Teng’s challenge right now is to define “the new meaning of ‘must haves.’” Accordingly, this collection is about clothes for “everywhere, anytime.

YIGAL AZROUEL: Yigal Azrouël turned out a collection filled with intricate embroidery and abstract ethnic prints, but it was far from bohemian.