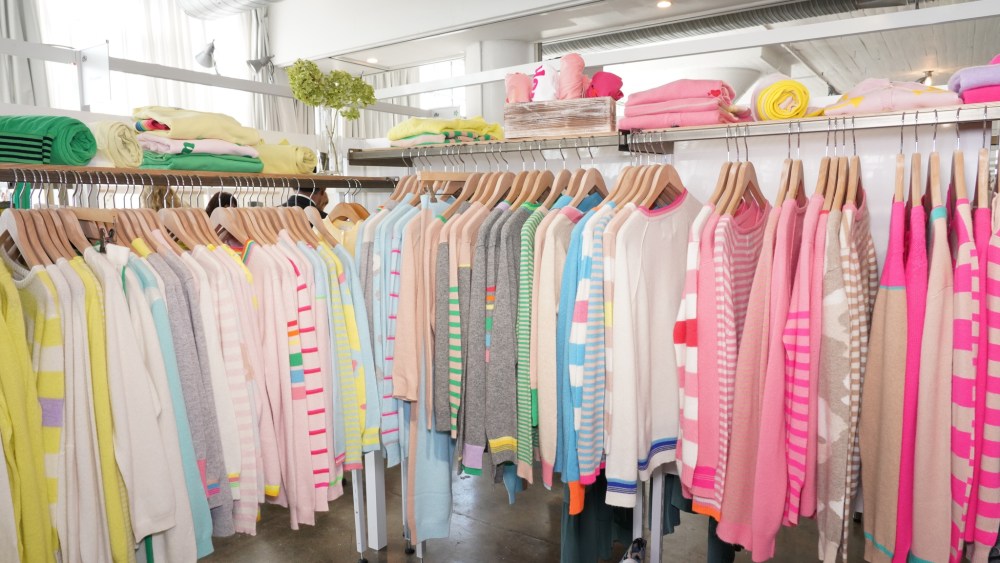 Designers & Agents, the three-day show in New York, offered a curated mix of directional sportswear and accessories brands, several of which are making strides toward sustainable and ecological practices.

“The show’s very vibrant and full,” said Meryl Mandelbaum, creative director of  D&A. “It has the highest rate of return in terms of exhibitors, and there are more than 30 new brands,” she said. The exhibition featured labels from the U.S., France, Italy, Japan, among other countries. Some 172 booths were spread over two locations: 601 West 26th Street and 547 West 26th Street, featuring 200 brands, added Ed Mandelbaum, president of D&A.

The exhibition featured an exclusive installation by trend forecaster Li Edelkoort acknowledging New York Textile Month called A Journey to Mount Fuji. It brought weavers from Japan’s Yamanashi region to the U.S. for the first time. The installation took the form of an imaginary outdoor setting, with selected products such as a linen dress for collecting flowers on a hike; a silk cashmere scarf for a cool, breezy evening; a sturdy umbrella for a sudden spring shower; textile pouches for a traveler’s toiletries and wellness products, and organic cotton pajamas for an overnight stay.

Retailers interviewed said they liked the curated nature of D&A, and the fact that the atmosphere felt artistic.

John Fondas, owner of The Blue Rooster in Harbour Island, The Bahamas, said his store focuses on resort apparel and accessories. “We want nonintellectual, pretty, simple clothes,” said Fondas. “Our clients are thin and rich and want beautiful things to wear on holiday.”

“The whole Indian thing is still going on — all that embroidery on cotton and gauze is hot,” said Fondas. He said he was seeking beautiful, body-conscious clothes. Among the brands he was buying were Matta, Gallabia and Antik Batik, where he bought “great dresses and beachy, cotton-y things.”

“We’ve avoided being destroyed by online,” said Fondas. He said his store carries a lot of English and European collections for U.S. clients, and for European clients, they like Matta and American Colors by Alex Lehr. From American Colors he bought gauzy dresses, gauzy cotton trousers in pale blue and navy, and little gauze shirts in white, navy and pale blues.

Fondas said his store, which is located in a little Victorian house that is all white, has a big celebrity clientele “and they pay full price.” He noted that he sells 95 percent of his stock at full price.

Linda Hall, owner of Vivace, which has stores in Highlands, N.C. and Cashiers, N.C., said she enjoys shopping D&A. “We see things that aren’t well distributed,” she said. Among the brands she was buying were Antik Batik, A Shirt Thing, Kristensen du Nord and Elaine Kim. “We loved the pants and denim jackets [at Elaine Kim],” she said.

Angelina Oshoa, merchandiser and buyer of Velvet by Graham & Spencer, which has eight retail locations and is based in Culver City, Calif., was looking to augment the brand’s namesake clothing offerings. “We carry clothes, as well as jewelry, hats, scarves and sunglasses, said Oshoa. She saw a few nice canvas totes at Utility Canvas and scarves at Inouitoosh Paris that she liked. “They do really well in our stores. I saw new color ways and linen which I thought was really strong,” she said.

Louise Jackson, owner of The Jacksons, an accessories firm, makes all its plant-based bags in Bangladesh. The bags, which are handmade with sayings such as Wow!, Merci, and Mon Armour, is based in London.

“I like the size of the show,” said Jackson. “You can breathe and you deal with specialty stores. We’re trying to put forward sustainability. That’s my passion.” Her bags wholesale from $40 to $55.

She said the women who make the bags work from their homes. “They don’t have running water, and the women are the main breadwinners. It’s changed the status of the women, and now they have power,” she said. She said their daughters are able to go to secondary school and a handful of them go to universities.

Darren Bonar, owner of Food Bag Foundation, said his bags are made from food bags in Marrakech. It takes between three and seven days to make a bag, and part of the proceeds go to their foundation, which is being set up to help educate women in Morocco. Bags wholesale between $65 and $95. “We’re trying to empower women in that country,” he said. The bags are sold to such stores as Anthropologie, Fred Segal and Lost and Found. Some of the bags are based on Josef Albers’ paintings.

Margaret O’Leary, the San Francisco-based designer, was selling tie-dyed cashmere wraps and pullovers at the show. While her collection is designed in San Francisco, it is knit in Peru and Portugal. “We’re loving the muted colors,” she said. She noted that she’s making a big move into organic cotton and chenille.

“I like this show,” said O’Leary. “It’s just edited down to small, independent boutiques.”

Nilou Ghodsi, owner of A Shirt Thing, said her brand grew out of her store called Heist in Venice, Calif. “There was a need for shirts that aren’t plain white button downs,” she said. Some of the shirts she’s offering are striped and button-downs with novelty details. The line is made in Los Angeles Plain shirts wholesale for $98 and novelties are $138.

Love Tanjane, an apparel firm based in Ojai, Calif. was showing its tie-dyed looks at the show. The company launched tie-dyed cashmere last February and has expanded the offering for spring. Gauze tops wholesale from $90 to $120 and cashmere goes from $190 to $210, according to Sonia Erneux, owner and designer.

“We’re only tie-dye, and our signature is beautiful fabrics with tie-dye,” she said. She said the cashmere is imported from China, but hand-dyed in California. The gauze comes from the East Coast. Among the stores it was selling at D&A were ABC Carpet and Pitkin County Dry Goods in Aspen, Colo.

Laurie Brazeau, owner of Brazeau Tricot, said she just started shipping this past year, but was thwarted by the fires in Malibu, where she ships from. “Every store reordered,” she said, noting her accounts include ABC Carpet. The line wholesales from $78 to $388. She said she was doing well with sweaters, dresses and palazzo pants, “which we sell like T-shirts for $108.”

Pure Cashmere NYC had success with its seasonless sportswear. “All the pants are doing well and the maxidress,” said Heewon Kim, managing director. She noted that the turtlenecks  and crewnecks are always bestsellers. The line wholesales from $52 to $200. “Everyone loves the colors and the touch. It’s well-priced and good quality,” she said.

Jumper 1234, a British-based firm, makes its cashmeres in Mongolia. The line, which includes attractive stripes and bright colors, wholesales from $88 to $180. The brand opened new accounts and saw current customers. Among the brand’s retailers are Ron Herman, Pachute, Gloria Jewel and Erica Wilson.

“People are loving the bright colors and want something that’s new and exciting to draw their customers in,” said Annie Lester, president of Access, which represents Jumper 1234.

“I’ve done D&A for years. I like it because it’s well-curated and people can find us. I find everything here is just more artistic. You can find things that not everybody else has,” said Lester.