Just under 20 percent of the brand's sales come from apparel and include collaborations with Jean-Charles de Castelbajac and Tommy Hilfiger.

The Rossignol store offers both fashion and technical styles.

Rossignol has brought the mountains to the city.

The venerable French brand best known for its high-end ski equipment is actually shining a spotlight on apparel in its first New York City store.

On Thursday night, the brand opened the doors to a months-long pop-up at 108 Wooster Street in the heart of SoHo. The colorful store, whose neighbors include Canada Goose and Moncler, will remain in place through the winter, and perhaps permanently, said Francois Goulet, president of Rossignol Group North America.

“This is our second activation in the U.S.,” he said. Last winter, Rossignol opened a similar pop-up in Aspen, Colo., that was so successful it remained open for a year and is back again this year, Goulet added.

He said the company’s 112-year history has been centered around ski equipment and hard goods, and it remains the core of the brand, “but we’ve been seriously into apparel for the past six or seven years.” And while there are a couple of sets of skis showcased in the New York pop-up, nearly the entire space is devoted to men’s and women’s clothing. “It’s a great place to showcase our apparel,” Goulet said.

Rossignol had annual sales of 370 million euros as of March 31, 2019, and is the world’s leading ski equipment producer. Apparel accounts for 17 percent of that figure and 80 percent of its sales come from outside France.

In apparel, the brand offers a wide range of lifestyle pieces and technical offerings. In the New York store, the après-ski selection is featured in the front and includes its latest collaboration with French designer Jean-Charles de Castelbajac.

Later in the season, Goulet said, the capsule designed by Tommy Hilfiger will also be offered in the store.

He stressed that although the design of these “urban sport” pieces is trend-right, with exploded graphics and special embellishments such as fur stripes on a down-filled jacket, they feature the same fabrics and features as the ski collection.

“From mountain to city, they have the same technical attributes,” Goulet said.

The walls of the store feature a repeating pattern of the brand’s rooster logo in its signature colors of blue, white and red along with other pop-culture elements intended to bring a taste of the Alps to New York.

Goulet said the Grenoble, France-based company, whose American operations are headquartered in Park City, Utah, has been heightening its focus on the U.S. market in recent years. Specialty sporting goods retailers such as Paragon sell both the hard goods and apparel, and the company launched an e-commerce site here last winter.

“New York City and the SoHo district have such strong ties to the fashion world,” he said. “It’s the perfect environment to showcase the breadth of the Rossignol apparel offer and its convergence of technicity and fashion.” 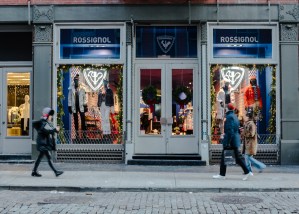 The new store is located in the heart of SoHo.  KAT ALVAREZ

Outside the U.S., Rossignol has permanent stores in Oslo, Norway; Chamonix, France, and two in Paris. And the company recently expanded into Beijing and Shanghai in China.

Rossignol was founded by Abel Rossignol, a carpenter and devoted skier who crafted a pair of skis out of solid wood. The company was sold to Quiksilver in 2005 and since 2013 has been majority owned by the private equity group, Altour Equity Partners.