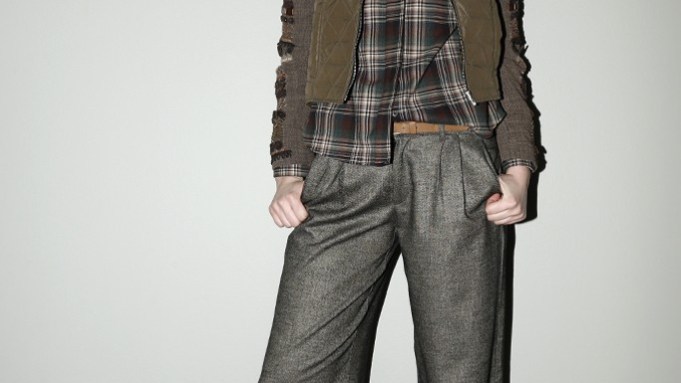 Sam Edelman wants to be a player in the contemporary sportswear arena.

Edelman’s new sportswear collection, licensed to Kellwood Co., is aimed at the 23- to 30-year-old woman who works in a creative industry. The fashion-forward line is designed to hang near such resources as Free People, Premium Denim, Ella Moss, Splendid and Velvet.

For the fall launch, Edelman has targeted such retailers as Nordstrom, Bloomingdale’s, Hudson’s Bay, Lord & Taylor and Dillard’s, as well as online sites such as Zappos, Amazon and Shopbop.

“There’s a sexiness to it. The line is very eclectic, with a bit of an edge to it. It’s trend-on, but not trendy,” said Leslie Singer, president of Sam Edelman sportswear, based at 1441 Broadway in New York.

Kim Tootell, director of sales, added that “The Sam Girl” can wear the collection in different ways. “She can put on a suit or mix it up and make it more playful,” she said. For example, the line has beaded shorts, which she can wear with a “great sweater, tights and a bootie,” and flirty dresses with an open keyhole in the back, that she can wear with a sweater over it. “It gives it a casual, organic feel,” she said.

“We want to outfit her from day to night. She can change her shoes and bag and go out in the evening. Versatility is key,” added Singer.

Sam Edelman, the $100 million footwear division of Brown Shoe Co., is known for its stylish footwear and its price-value relationship, and the apparel will have a similar philosophy. The sportswear is designed in City of Industry, Calif., where Kellwood has a design studio, and is manufactured throughout Asia.

“We believe Sam Edelman [apparel] is a $100 million business over a three- to four-year period,” said Shanahan.

Sam Edelman will also be carried at samedelman.com, beginning in early August, as well as in Sam Edelman stores in Manhattan and Beverly Hills, which open in early June. The apparel will be aggressively marketed via social media. Edelman launched an ad campaign this spring featuring model Kate Upton to raise its profile.