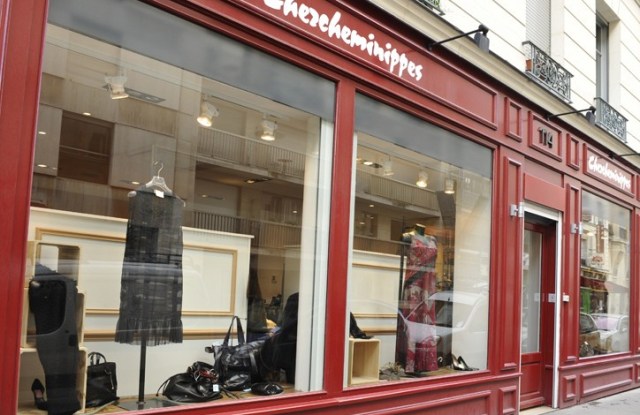 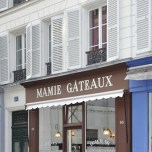 Rue du Cherche Midi on the Left Bank here is percolating with student activity. Not only is there the proliferation of art schools and universities that cause the area to swarm with teens and twentysomethings, but the wide choice of eateries, fashion and home goods shops keeps them in the neighborhood.

Marie Douchet, a 25-year-old design student at L’Institut Supérieur des Arts Appliqués, says she favors Hemeistone, a ready-to-wear boutique. The store, at 23 Rue du Cherche Midi (just a few doors down from her art school), has garnered a large following among young Parisiennes since it opened in 2008.

“We have a lot of regular clients, mostly young women,” says Jane de Wavrechin, director of development and commerce for the boutique. “Our most popular piece is a simple dress with zips. They are our trademark.”

Cherche Midi is a hop away from one of Paris’ most tony department stores, Le Bon Marché. But this giant peacefully coexists with other stores like the new A.P.C. store dedicated to jeanswear, on the Rue de Grenelle. “I chose this area because there are not many other boutiques like ours, and this area is surrounded by schools, so lots of students wander past,” explains founder Jean Touitou.

Cherche Midi’s relaxed vibe emanates, in part, from some of the stores on it.

Bibo, at 47 Rue du Cherche Midi, is a multibrand store that opened in March and has an assortment of urban and outerwear and athletic shoes.

“Our trainers are really popular, but the area is definitely very feminine, so we want to develop more for [women],” says Sophie Roman, Bibo’s manager. The shop’s selection of brands includes Adidas, Nike and Coq Sportif at prices ranging from 50 euros to 100 euros, or about $72 to $143 at current exchange, for sneakers and T-shirts.

“Here, the slim jean works, whereas at our other boutique it’s the baggy [style],” offers Roman, referring to Bibo’s sister store on the Right Bank, at 9 bis Boulevard Poissonière.

A few doors away (at number 53) and a little pricier is Moloko. With a couple of other boutiques in Paris, this multibrand retailer has been in business for several years and focuses on French designers.

“Our clothes are quite contemporary and our dresses are popular,” says Isabelle Sebon, store manager. Dresses retail at about 220 euros, or $316.

Proving to be a choice haunt since opening in September is Sandro’s men’s store, at number 10. “We cater to everyone, with streetwear, rock [wear], suits,” says Yoni Dahan, store manager. Among the most popular items—at an affordable 55 euros, or $79—is a T-shirt with a David Bowie print. Dahan says it’s popular among men and women, adding that a lot of clients, including many from Japan, come in after visiting the renowned bread maker Poilâne next door.

Meanwhile, Chercheminippes is a chain of six consignment stores all found between numbers 102 and 124 on the street.

“It’s amazing. We just don’t stop. We sell everything very quickly,” says Delphine Tiry, co-director of the shops. “Women sometimes come back and forth twice a day.”

Chercheminippes caters to a variety of fashion needs, from accessories and designer brands to high-street labels, men’s and kids’ wear and home goods. One store sells contemporary brands, such as agnès b., Gerard Darel and Maje, while another offers designer collections, such as a Valentino green leather bag for 300 euros, or $432, or a Versus dress selling for 60 euros, or $86.

“The prices are very correct, which is why we sell so well and we have a constant turnover of interesting things,” says Tiry. “Our client is pretty much everyone. People come with their whole families. And it’s a great area, with lots of different things and lots of places to go for tea.”

Indeed, there are several tea houses and cafes, such as Mamie Gateaux or the Chez les Filles. A new tea salon is due to open next year. A fresh food and organic market is close by, on the Boulevard de Raspail.

Along the Rue Saint-Placide, which feeds into Cherche Midi, is Le Refuge, a concept sneaker store that has developed a cult following.

“Lots of things change in the area, but what is great is that we have four generations that have been coming in for years,” says Remy Pawlotsky, Le Refuge’s owner, who took over the store his parents founded in 1953. The store stocks around 20 to 30 brands, including Timberland, Gola and Converse (standard and limited edition pieces). Veja sneakers, a French brand made in Brazil from organic fibers, retail from 85 euros to 120 euros, or $122 to $173.

“We have two targets here: people who make fashion and those who follow fashion,” says Pawlotsky, who also sells accessories such as Swiss brand Freitag and Italy’s A-Style motorcycle helmets. “The principle of my store is that everyone can come in and see it and enjoy our service.”