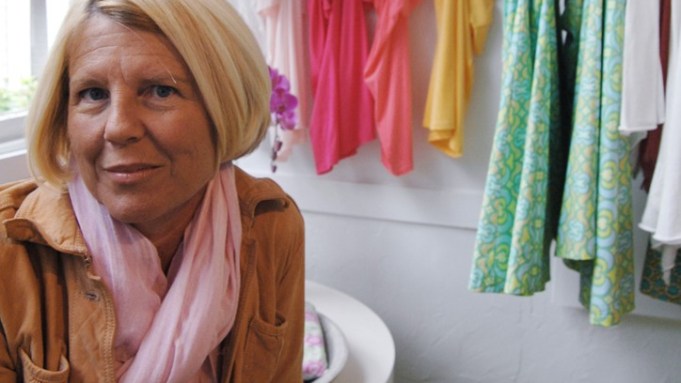 GLOUCESTER, Mass. — Amid shingled cottages and galleries in the seaside artist enclave of Rocky Neck (Edward Hopper, Winslow Homer and Mark Rothko are among those who painted here), designer Sigrid Olsen is crafting a post-recession second act.

Last year, Liz Claiborne Inc. shuttered Olsen’s namesake brand after failing to find a buyer. At its height, the misses label where Olsen served as creative director generated sales in excess of $100 million annually, but was undone by aggressive retail expansion — 54 stores in roughly four years — in a souring economy.

Yet whatever grief Olsen felt over the demise of the brand she spent 25 years building seems to have passed. At 56, she seems energized, leading art-and-yoga retreats and being featured on Jane Pauley’s “Smart Talk for Women” lecture series. She’s sold three homes, paring down (financially and spiritually) to a single house and gallery on Rocky Neck Avenue.

And a short bike peddle down the street, she’s planted the seed for her next brand: Isla Beach House, a 400-square-foot, red shingle cottage she opened in mid-May brimming with beachy-chic fashion, accessories, home decor and her own watercolor prints. Olsen plans to license the concept to coastal resorts worldwide, advising them on collections to buy and selling them Isla-branded wares. She sees this store as part functional business, part laboratory and part showroom for clients interested in licensing deals.

“We travel a lot and you’d be surprised how many places don’t have a boutique,” said Olsen. “We can help them get set up and provide direction every season.”

Already she has created two Isla fragrances (Palm, a coconut-vanilla blend, and Pareo, a tropical floral), pottery and home accessories under the label. Once her noncompete contract with Liz Claiborne expires in 2010, she intends to launch Isla Beach House clothing.

Her husband, Curtis Sanders, formerly a fashion industry sales representative, is her partner in the endeavor.

The first Isla Beach House, in a building originally built as a fish shack, sits on a wharf overlooking Smith Bay. Inside, the white walls and peaked, wide-planked ceiling, painted ocean blue, make it look like a tiny chapel. Dried starfish are piled into designs in the eaves.

Aside from Sanctuary pants, Olsen has chosen Chaudry printed maxidresses ($120), Love Shop printed silk sarongs ($70), shibori-dyed cotton pareos which double as scarves ($25), and fine jersey T-shirts from Rag Doll ($36 apiece), which she has hung from weathered hooks. Through the crafts Web site Etsy, Olsen found Willywaw, a line of canvas totes, and persuaded the artist to sell wholesale by trading a session of business advice. The totes, printed with unusual marine motifs like jellyfish and undulating seaweed ($28 to $50), have emerged as a strong seller.

She’s penned and self-published a cookbook, and is close to delivering her agent a book proposal on her personal style. But even with multiple projects percolating, Olsen is clearly itching to get back into designing clothing. And she has a vision of what she’d like to achieve.

“The missy designers focus on fit and underestimate their customer’s appetite for fashion, and the contemporary lines don’t look good if you’re over size four. I’m going for a hybrid of those two sensibilities,” she said simply.