Jess McKie runs a largely one-woman operation — but that hasn’t deterred her from racking up some significant collaborations. 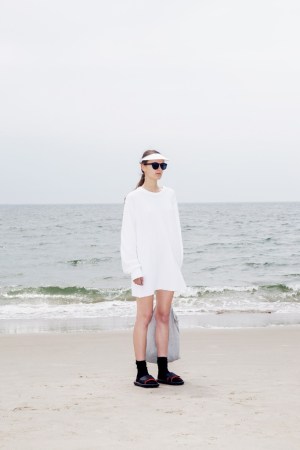 Sködia designer Jess McKie runs a largely one-woman operation — but that hasn’t deterred her from racking up some significant collaborations.

After learning the ins and outs of design at Creatures of Comfort, the Australian-born designer launched Sködia, a collection of high-end basics, a year ago. Sködia refers to the Swedish word “to shoo,” but McKie said it is the Swedes’ clean, minimal and simple design aesthetic that resonated with her. Sködia separates, which feature unexpected accents like a hidden inseam hand pocket with a cozy, fuzzy lining, are definitively Swedish, she said.

The Brooklynite has teamed with electronica musician Chet Faker, whom she grew up with and once worked in a Melbourne bookstore with, to create what they are calling “Chet Sweats.” As of March, the sweatshirt and sweatpants will be sold via his site, the Sködia e-commerce site and at his various concerts this year in Australia and the U.S. “The whole idea of Chet Sweats is that this is supposed to be something he can wear on the bus, traveling, on an airplane or doing other activities while on tour, even if he’s just relaxing. But he could also wear them straight onstage,” McKie said.

Rihanna gave Sködia some major attention when she wore a look at the announcement of her deal with Puma last month. (Her stylist had bought a few pieces at Opening Ceremony, according to McKie.) That publicity drove new visitors to the Sködia site, but many fall items had already sold out and spring styles had yet to arrive, McKie said.

Building on the New York–made brand’s success at Opening Ceremony last fall, McKie has offered the retailer the choice of one of three exclusive items for spring, with her hope that the retailer will opt for the bag. The designer is also teaming with creative agency Arena in Kansas City to develop a few multifunctional artistic pieces, such as a cup that can be used as a planter or to water a plant.

Next week, an Arena founder will be helping her shoot her look book in Beacon, N.Y. The fall collection is meant to be more refined and colorful, since she has a secondary label in the works with model, fitness instructor and stylist McKenzie Hayes. They have dreamt up seven or eight styles for the Sködia for McKenzie Hayes collection. Due out in June, the yogawear-like attire is meant to be worn as loungewear, though it could fit the task for working out as well.

While McKie’s mother, Deborah, still knits some of the knitwear, as she has done from the start, McKie said her collection is becoming more sportswear-based. The enterprising designer relies on freelancers to pitch in with her company and she is starting to envision a potentially larger operation. She plans to meet with department stores in the coming months “to feel out those waters,” she said.