The economic slump takes a big bite out of Spanish trade shows. 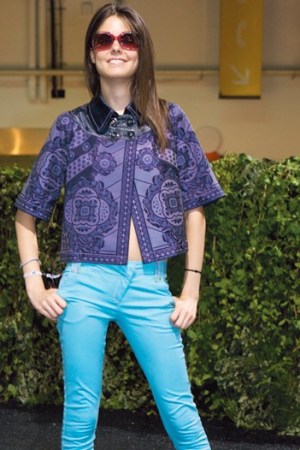 The economic slump takes a big bite out of Spanish trade shows.

Taking the gentlest hit is Bread & Butter Barcelona, held this past July 2 to 4. Exhibitors trimmed down to 893 brands — or 60 fewer than the January edition — and on day one, visitors dipped to 30,500, about 500 less than a year ago. For the first time since the Berlin-organized sportswear and contemporary apparel show took root in Barcelona three years ago, attendance decreased compared to the prior year, down to 2.5 percent to 89,168.

“We want to grow but not at the expense of creativity,” said founder and managing director Karl-Heinz Müller, adding that the number of exhibitors at the next edition, Jan. 21 to 23, will not exceed 800.

Müller said exhibition space at the July edition increased approximately 21,500 square feet without the much-ballyhooed use of the neighboring Palau Nacional for daily catwalk presentations, a move that had turned out to be “not the best idea,” he said. “[The Palau] was costly. I’m talking hundreds of thousands of euros and it didn’t really function,” he said.

B&BB’s The Source, a new format that bowed in July made up of about 80 international fabric and denim producers, suppliers, laundry and fi nishing companies, is seen as an area with great potential, according to an organizer. For the January edition, exhibitors are expected to total 120, “with maximum space and capacity for about 150 vendors.”

To combat today’s financial woes, vendors at the Madrid-based Modacalzado shoe show said they are working up strategies to grow market share through strengthened distribution channels and new product categories.

Modacalzado director Pola Iglesias said the upcoming March 17 to 19 edition will pare down exhibition space — from five to four halls at the Madrid fairgrounds — “to offer a more concentrated product mix.”

Dropouts included high-end iconic brands such as Pedro Garcia and Castañer, which showed stripes and a washed-out denim espadrille series in its downtown Madrid shop. A spokesman for Garcia, the Elda, Spain-based women’s label, said, “The Madrid fair’s attraction for an international buyer is absolutely nil. The environment is not luxurious enough; the show is too middle-of-the-road.”

According to official figures, Modacalzado and Iberpiel leather goods fair, which traditionally run in tandem, drew 13,312 trade visitors, down 3,900 over September 2007. Foreigner attendees totalled 2,580, a drop of 20.5 percent.

Laura Schumacher, American owner of Espadrillesetc.com, an Alicante, Spain-based site that sells hand-stitched espadrille styles, said, “I’m looking for basics and some fun things. The fair was worth the trip but my market is the U.S., and I’m playing it safe this year.”

Iglesias said, “The show was soft as far as traffic is concerned but strong in quality of visitors and retailers. As organizers, we weren’t necessarily expecting a great fair but it was better than expected and, in general, exhibitors were happy with the results. Hopefully the bad news has bottomed out and we’ll have similar vendor participation next year.”

Referring to the present economic turmoil and weak consumer spending on the home front, director Cuca Solana suggested, “In moments of crisis, if you don’t make changes, you go under.”

With triple the space and two catwalks, the event brought in 40,000 visitors, a 20 percent increase over last February’s edition, organizers said, including a group of 60 foreign journalists invited by the organization; scattered local retailers; special guests, and a few celebrities.

Principally a domestic women’s ready-to-wear platform, Cibeles Madrid Fashion Week featured 36 designers and a lively group of young talents. Under the moniker El Ego, they showcased their wares on and off the catwalk during the five-day run.

Next February’s roster has yet to be finalized but shows will again be held on two catwalks in Hall 14, with a similar number of veteran designers and newcomers, sources confirmed.

For the first time in recent years, there was no trade event running in tandem with Cibeles because SIMM, the biannual apparel fair, moved up its dates — and it got clobbered as a result.

According to official figures, SIMM, which ran July 17 to 19, drew 6,598 visitors, down a staggering 60 percent compared with a year ago. Foreign attendance slid to 973 from 2,010. In addition, exhibitor participation dropped almost 30 percent, from 811 to 571, over last September’s spring-summer edition.

Earlier dates and a sharp decline in consumer confidence — reportedly at its lowest level since 2004 — were blamed for the fair’s poor showing.

“Because of the early dates, fabrics are missing and most of the factories aren’t ready. It’s just not a convenient time for the Spanish market because everyone is on vacation,” commented an Athens-based retailer.