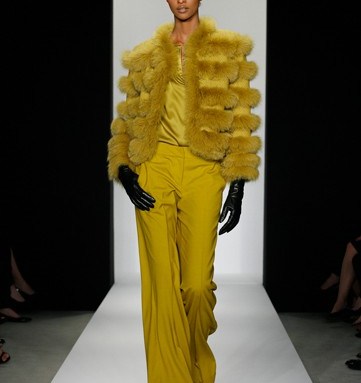 IRVINE, Calif. — Talk about scaling back.

St. John got a jump on the fall runway season, but compared to its 400-person tent show and cocktail party for spring, Tuesday’s event was an intimate affair. About 150 guests including, for the first time, buyers from Neiman Marcus, Nordstrom and Saks Fifth Avenue — the line went to market Wednesday — gathered in the main showroom.

Part of what the company saved in production costs was spent on flying in 12 top models from New York, including Jacquetta Wheeler, Alek Wek and Caroline Ribeiro. They opened the show sauntering down the catwalk to “Bette Davis Eyes” wearing satin and fur — a departure from the company’s signature Santana knits. Those quickly followed, in new featherweight textures shaped into longer tailored jackets with exaggerated collars or feminine ruffled necklines, paired with high-waisted skirts, skinny woven pants or leggings.

“Instead of our customers going elsewhere to buy their tops and pants, we want them to come to us for 24/7 dressing,” McMahon said.

Kelly Gray, seated in the front row with her mother, co-founder Marie Gray, broke into applause when a one-shouldered silk jumpsuit came down the runway. The Grays stepped away from day-to-day operations two years ago to act as marketing and design consultants, respectively, and Marie Gray still sits on the board. “I love the classics of course, but the whole show was a joy to watch,” she said.

“This collection was about making women feel good,” McMahon said. “In this economy, people need to feel good. There is such gloom and doom now, but we are cautiously optimistic that by fall there will be some return to normalcy.”

He said the signature line’s spring performance was encouraging, but admitted timing for the company’s new spin-off, SoCa, launched during a challenging November, “could have been better, because when we launched, everyone else was going 70 percent off. But we’re optimistic.”

“We continue to keep our inventories lean so that, when women are buying a regular-priced item, [they are] not seeing it heavily promoted elsewhere,” he said. “It’s good investment dressing that generally does well in difficult times.”

Perhaps incoming First Lady Michelle Obama should take note. “We are very excited about her sense of style,” McMahon said. “She loves bold colors and dresses for her body type. We have not dressed her, but we would like to.”