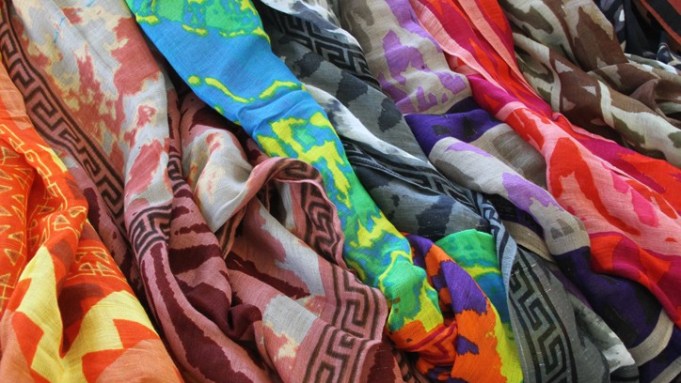 The extensive jewelry, accessories and scarf collection is a collaboration between Stefani Greenfield, Theodora’s mother, and Desiree Gruber, Callum’s mother. In 2009, Greenfield left Scoop, the company she co-founded and embarked on projects such as “Curations with Stefani Greenfield” on HSN. Gruber is the founder of multimedia production company Full Picture.

The women, who are friends, began working on the collection eight months ago.

“We will definitely open two Theodora & Callum stores in 2011,” said Greenfield, adding the brand will be sold in specialty stores around the world. A Web site will be unveiled in December.

Actually, there are more than 100 scarves in four different fibers: rayon viscose for $48, cotton T-shirt fabric for $68, lattice-edged ramie, $88, and featherweight cashmere, $298. Each of 40 patterns will come in two to four colorways.

Theodora & Callum has a late Sixties, early Seventies jet-set, hippie vibe. Bib necklaces with turquoise stones or cascades of foreign coins look like they could have come from Turkey or Greece. Greenfield, who spends a few weeks every summer on the island of Mykonos, no doubt soaked up the aesthetic.

She said she doesn’t “feel fully dressed without a scarf,” but understands how some women are challenged to wear one properly. “Most women don’t have the confidence to put themselves together eclectically. I learned it all from Donna Karan,” said Greenfield, who worked for the designer for five years, starting in 1989. “The off-the-shoulder [dresses and tops] worn with scarves.”

“The inspiration book for Theodora & Callum has everyone from Kate Hepburn to Kate Moss,” Gruber said. “There’s Talitha Getty, Jackie O and Alana Hamilton on Capri. We were also inspired by modern sexy moms such as Jennifer Garner and Julie Bowen.”

On a recent afternoon, Greenfield was wearing a gray top, black capris, a black-and-white scarf loosely wrapped around her neck, a silver necklace and thick silver bangle bracelets. Gruber, a self-described conservative dresser, wore a black wrap dress and no jewelry. She grabbed a gold-tiered Theodora & Callum necklace and put it on, commenting, “This could go with anything.”

Jewelry in a variety of metals — gold, rose gold, brass, copper and silver — with semiprecious stones such as lapis lazuli, tigers eye and carnelian, ranges in price from $75 to $525, with an average price of $250.

“The jewelry is 95 percent made in the U.S.,” Greenfield said. “I’m so proud of the quality of the jewelry.”

Theodora & Callum has the blessing of J. Crew Group chairman and chief executive officer Millard “Mickey” Drexler, a friend of Greenfield’s, who told her, “‘I love the names. You have to create a concept to build a brand.’”

Greenfield believes she and Gruber have done that. “Theodora & Callum could branch into ready-to-wear,” said Greenfield. “This could evolve in any direction. There are no limitations to this brand.”