Designer is back in the contemporary business with a new label.

By Lisa Lockwood and Mayte Allende on February 9, 2011
View Slideshow 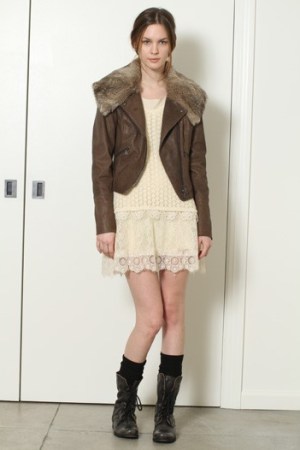 After a four-year hiatus, designer Cynthia Steffe is back in the contemporary business with a new label, Cluny.

With financing from August Silk, Steffe will introduce a contemporary collection this month, aimed at stores such as Neiman Marcus and Saks Fifth Avenue.

Steffe and her husband, Rick Roberts, left Bernard Chaus Inc. in 2006 over a contract dispute, and her namesake label remained with Chaus, which continues to offer a Cynthia Steffe collection, designed by creative director Shaun Kearney. During their time away — which included a one-year non-compete in the sportswear market — the couple consulted for stores such as Lord & Taylor. “I sat out a year with the non-compete and worked on private label, accessories, Christmas ornaments and candles,” said Steffe in an interview at her new offices at 499 Seventh Avenue.

Steffe said when she left Chaus, she never thought she’d stay away so long.

“We left Cynthia Steffe with every intention of starting a business, but then came 2008 and 2009, and the sky was falling in this industry. We decided it wasn’t a good time,” said Steffe. She said all along, they kept talking to people and stayed in touch with retailers and industry friends. About eight months ago, they were approached by August Silk, which has extensive manufacturing facilities in China, and they decided to launch the Cluny division.

“The wonderful thing about designing with August Silk is they’ve got an incredible sourcing arm in the Far East,” said Steffe. “They’re totally vertical and we can create our own yarns and put the contents together.”

Steffe, who will be spending a great deal of time in China, has hired a three-person design team, and is using August Silk’s production and financial staffs.

Steffe explained that August Silk wanted to diversify and expand its portfolio, and the Cluny division is an entry for them into the contemporary area.

According to Steffe, Cluny will be merchandised at the opening price point in the contemporary area, housed near lines such as Alice + Olivia.

“It’s very novelty-driven, contemporary with a feminine edge,” the designer said. “I’ve developed a customer base that’s on the girly side, and the younger side.”

The collection features easy dressing with an edge, incorporating lots of streetwear references such as leather leggings, oversize knits and jackets. There’s a fur-collar black leather jacket, a Mongolian fur vest, a brown leather fur collar jacket, and a rabbit jacket with fox sleeves that can be easily thrown over the more feminine dresses, which range from black or cream lace tiered ones, to an olive style with silver embroidered detail. Several of the day-to-evening pieces have crochet embellishments, such as a gray cotton maxidress with crochet sleeves and back detail. For fall, the collection wholesales from $49 for a simple T-shirt to $199 for a dress. Fur and leather jackets will be priced higher. The company’s label is designed with the name Cluny (which is a type of lace) printed on a piece of lace.

Roberts said he and Steffe will provide the creative, marketing and sales expertise, while August Silk provides good infrastructure with its financial and production arm.

Despite her fashion career’s ups and downs, Steffe has proven to have resilience. After graduating from Parsons The New School for Design in 1981, where she won the Golden Thimble award for fashion design during her senior year, she worked for the Anne Klein Co. as an assistant to Donna Karan and Louis Dell’Olio. She left in 1983 to become head designer at Spitalnick, a then start-up sportswear company headed by Irving Spitalnick, where she worked for six years and helped establish the company as a major brand in the bridge sector. She left in 1989 to launch her business with Roberts. In 2000, they licensed the Cynthia Steffe name to the Leslie Fay Cos. The division, which was doing about $20 million in business at one point, had to extricate itself from Leslie Fay, which had gone out of business, and sold their label for an estimated $5 million to Chaus in 2004. They admitted it wasn’t the best plan to sell Steffe’s name, but they wanted to keep their employees working. In 2006, the label was doing around $30 million, and the business was profitable.

“All the retailers made money with us,” said Roberts.

He projected that Cluny will do around $5 million in wholesale volume in its first year. Monthly deliveries of about 25 pieces will begin in July. Roberts added that distribution will be selective. “I’m keeping it very focused. As we grow, we’ll layer in more basic pieces. But [at retail] it’s the special pieces a woman doesn’t have that are selling,” said Steffe.

Steffe plans to market the line with personal appearances at the stores, as well as advertising, blogs and Twitter. Eventually, they will launch a Web site.