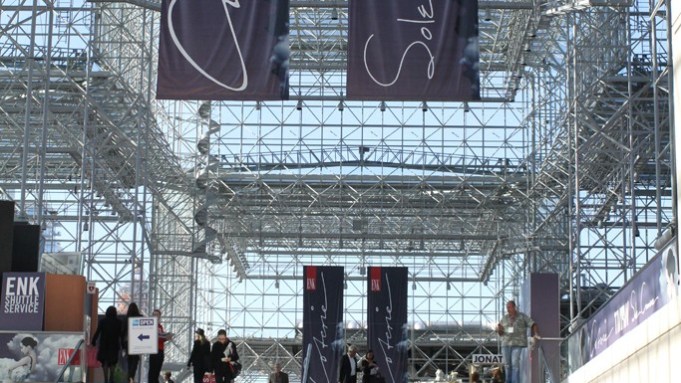 Animal prints (especially zebra and reptiles); leather (real and fake), geometrics and black and white, as well as shades of blue, such as navy, wedgewood and washed-out denim, were in abundance at the show. Many of the exhibitors featured prints, stripes and florals in all types of combinations. The motocross jacket was evident in many exhibitors’ collections, and skinny silhouettes in denim (from dark to bleached to white) were augmented by lots of flare legs.

Overall, he said, “I think there’s a Nineties vibe going on. There’s old-school Helmut Lang, harem pants and denim jumpsuits. Soft, fluid pants we haven’t seen in a long time.” He said his buyers purchase “modern and girly” at the show, lines such as Vince and Theory in the modern category, and Milly and Nanette Lepore in the girly category.

Randi Siegal, owner of Rapunzel’s Closet and Lil Rapunzel’s in Palm Beach, Fla., said the big trends were animal prints and colors such as indigo and orange. She noted that she also saw a lot of loose-knit sweaters, camouflage prints and printed trousers. “Denim, overall, seems like it’s going back to basics, as in clean washes in skinny silhouettes,” she said.

She bought the cropped sweatpants at Nation. She noted that Splendid did a nice indigo collection, and “Joie had a great spring delivery. They had a good mix of solids and nice prints.” She also liked Michael Stars’ relaxed navy and white striped drawstring pants and a fun muscle T that said “Dream” on the front in a typewriterlike font.

“The show seems really busy, which makes it a more exciting buying atmosphere because the reps get a good read of what’s selling,” said Siegal.

“It’s nice to see the cooler weather,” he added. At the show, he was seeing a lot of dresses, but noticed a trend toward separates and jackets. “We do a lot of the jeans and contemporary looks here.” He believes that the jeans business has slowed down, and he said the jeans firms weren’t showing anything they haven’t done before. “I would not be surprised if wider legs start to show up,” he said.

Judy Bockl, owner of I See London, a 1,100-square-foot boutique in Milwaukee, was shopping Coterie with her daughter and daughter-in-law for spring merchandise. “We do separates and more item-driven” things, she said. Among the lines she buys at Coterie are Bailey 44, Vince, Michael Stars and Joie. “We try to get something different for Milwaukee,” she said. Even though spring comes late in Milwaukee, and sometimes not at all, “we’ll be ready just in case.” Andria De Toro, the manager/buyer, said what’s selling right now is black and white, still a lot of stripes and vegan leather (pleather, animal-friendly leather).

“We definitely do a lot of buying here,” said Bockl. “This is our main place. We also go to Chicago.” Among the jeans lines they buy are Henry & Belle, Cookie Johnson and Christopher Blue.

In the jeans category, De Toro observed, “We’re starting to look for other [silhouettes] besides skinny. We like straight leg and boot cut, and micro flare is coming on now. I think they’ll be getting away from super-skinny.”

“We’re looking to see what will be good for spring,” said Goldstein, who was buying the collection at Minnie Rose. “Everything looks great. It does well for us,” he said. He does well with prints, but it has to be the right print. “They have to be subtle enough to wear,” he said. He was seeing a lot of chambray in the market which is “soft and nice.” Tops continue to be the most important category, “and dresses are a big category.” He also wanted to buy mesh looks, which sell well. “In metallics it’s great, it’s a little dressier,” he said.