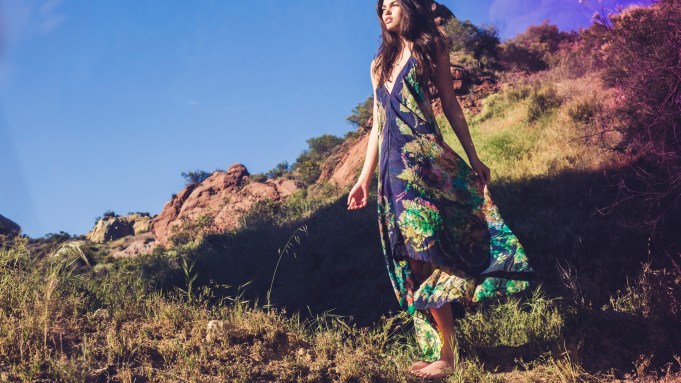 Call it irony — or serendipity. Former fashion publicist Elissa Kravetz took a far-flung vacation from the fashion hubbub only to wind up on the other side as a designer, retailer and wholesaler. Sun Child, her contemporary apparel line made from recycled Indian saris, makes its debut today online, in specialty boutique Roseark, and in Kathy Rose’s wholesale showroom by the same name.

Kravetz, a former Steve Madden and People’s Revolution staffer, spent December 2014 traveling in Asia, ending her trip with a yoga retreat in Goa, India. Walking through the night market on her last day, she stumbled upon a stall selling colorful dresses and caftans created by a local family.

“I met the oldest daughter that night, put my hands on her shoulders, and told her that I was going to help her and her family sell these dresses. Six months later I was on a plane back to Goa,” said Kravetz, who spent a week sorting through the silks to create a collection of 108 dresses. When she returned to Los Angeles and hung them up in the backyard of her Venice Beach cottage, her friends bought them all in three weeks. She repeated the process, this time showing the pieces to Barneys New York. While the retailer didn’t pick them up, the meeting encouraged Kravetz to make a go of it.

In September of last year she and her sister Jessica shuttered their bicoastal public relations firm so Kravetz could ready for a launch. She began by donning a new dress each day and stopping by Abbot Kinney Boulevard boutique Principessa until she could get a meeting with the manager, who picked up a few dresses. The line retails for $375 to $525 there, at Inland Venice, In Heroes We Trust, and Roseark in Los Angeles. Overseas, they sell at Wanderlust in Tulum, Mexico and The Art of Living in Saudi Arabia.

Sunchild’s silhouettes include a long, convertible V-neck halter dress and two styles of silk jackets. Pants and jumpsuits are set to make their debuts for holiday. Kravetz has since left the beach for the hills of Topanga Canyon, where she set up a showroom in her woodsy cabin.

As she has grown close with her Indian tailors, they began the tradition of putting a few pieces from each new collection in a circle on the ground and blessing them. In her Topanga showroom, each dress is saged, gonged and hung outside to spend one night under the stars. It may sound hippie-dippie, but Kravetz says, “Women can feel this love and energy when they come into the showroom. I’ve been in the fashion business since 1999 and I’ve never experienced what I see when a woman puts on one of these pieces. Almost all of them stretch out their arms and spin around. It pulls the beauty and magic and confidence right out of every woman.”

Said retailer, jewelry designer and showroom owner Rose, “Elissa and I have known each other for years, and when I first put on one of the Sun Child dresses there was a spring in my step. The dresses are beautiful, the silks luxurious and I can dress them down when I’m with my family and dress them up with a Tom Ford blazer for evening.”

Kravetz has other fashion mentors as well. She began interning for Steve Madden during college, moved to New York to work there full-time and eventually signed Madden as her first client when she opened her own p.r. shop. “He continues to be a sounding board for me and I’m so grateful,” she said.

She also has a younger friend to thank for the name of her new line. In 2011, Kravetz founded the antibullying awareness nonprofit The Farley Project, and one of her mentees last year gave her a wooden sign for her birthday that said “sun child.” She said, “It gave me chills and I knew this is what we’d call the brand.” For now, she hopes to grow her wholesale distribution enough to be able to give back to a different charity in India each year.