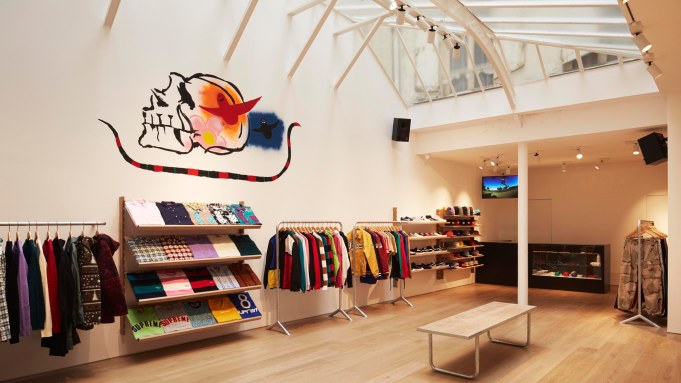 PARIS — Supreme, the skate brand with a cultlike following, has opened its first store here.

Located at 20 Rue Barbette in the Marais district, just off the busy thoroughfare of Rue Vieille du Temple, the store is housed in a former workshop divided into two areas — a gallerylike entrance space that links via a corridor to a back section with a glass roof.

Supreme celebrated the opening with a party on the closing day of Paris Fashion Week that drew the likes of Rick Owens, Gosha Rubchinskiy, Virgil Abloh, Kim Jones, Kris Van Assche and Chloë Sevigny, alongside a group of young local skaters.

Also in attendance was Ian Connor — stylist to Kylie Jenner, creative consultant to Kanye West and Skechers aficionado — who is said to own the world’s biggest collection of Supreme clothing and accessories.

The entrance area of the store features a collage of images that proved a popular backdrop for taking photos. Video screens showed footage of local skaters riding in their favorite spots in the city, including Place de la République and Trocadéro.

Angelo Baque, brand director, said the location was chosen because it was in the heart of a commercial area.

“We knew we wanted to be in the Marais. We didn’t want to be too cool where nobody wanted to go to the store. We actually wanted to make it accessible to people. At the same time, the Marais is tricky because it’s such a super commercial area,” he said.

“We have to tread lightly and see basically how we can position ourselves without compromising who we are and still be true to ourselves,” Baque explained.

Supreme, which releases items in very limited batches, frequently generates long lines outside its stores, which now total 10 worldwide, with other units spread out between the U.S., Japan and the U.K. Baque said this was not a consideration.

“We had to find a space first, and everything else kind of falls into place. We go a lot on gut instinct. We’re not as calculated as people think that we are,” he said.

He credited this approach with the enduring popularity of Supreme, founded by James Jebbia in 1994. The brand quickly became so ubiquitous that U.S. Vogue ran a feature in 1995 comparing the Supreme store to a Chanel boutique.

In addition to collaborating with brands such as Nike, Vans and Timberland, Supreme has tapped artists such as Richard Prince, Jeff Koons and Larry Clark to design its skateboard decks. Its T-shirts have featured personalities ranging from Kate Moss to Morrissey and Lady Gaga.

“We have a ‘we do what we want’ mentality, you know. A lot of the projects we do, there’s really no rhyme or reason and once again, we stay true to ourselves and I think kids really appreciate that,” Baque said. “Take a look around. It’s as Socialist as it can get. There isn’t, like, a hierarchy of who we want here.”

Abloh credited Supreme with inspiring him to launch his high-end streetwear-inspired brand Off-White.

“James is like the ultimate mentor for me and what I’m doing. It’s my Louis Vuitton, in a way. Growing up skating in the Nineties, and then seeing a brand evolve that is, like, that buttoned-down, that confident of itself, that creative in this exact space, is rare to witness in a lifetime,” he said.

“It’s subculture. It’s youth-driven. It’s embracing the community. Streetwear and our young brands — that’s all we have. We don’t have the luxury — no pun intended — to have large advertising budgets and things, so I think what you’ll find in the future is that this groundswell of brands and loyalty are the new model for how clothes are marketed and manufactured and made and inspired,” he added.

Artist Aaron Young, fresh off a performance involving chainsaws at the Massimo De Carlo gallery in Milan, also came to lend his support. “A bunch of us Lower East Side artists have always been attached to the brand, worn the brand, contributed to the brand, and it’s great that now they’ve finally found a home in Paris,” he said.

Connor started collecting Supreme when he was 15.

“I just fell in love with the brand, the variety of things I could wear. I can either be a streetwear kid with a dirty T-shirt or I can wear a button-down, or a cool-ass cardigan with cool-ass material that only the high-end brands made,” he explained. But collaborating with Supreme is a more tricky proposition.

“I actually used to design for a little while, around the age of 21, 22, but I was pretty immature and I got fired after three months,” he said.

“Right now, I still have to learn more, so I’m dealing with an older brand by the name of Pastelle, Kanye West’s first brand, so I’ll be running that. And then I’ll say yeah, around the age of 27, 28 — I’m 23 now — I should be ready to work back with Supreme, hopefully if they’re open to it also,” Connor said.