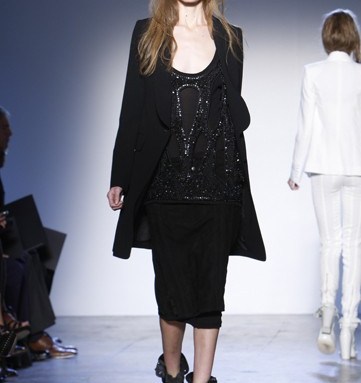 Phi, the critically acclaimed sportswear label founded by Susan Dell in 2003, is closing, another victim of the recession.

The collection developed a cult following in the New York fashion scene. But the pre-spring delivery, which was shipped to stores this month, will be Phi’s last. The Phi boutique at 71 Greene Street in Manhattan’s SoHo neighborhood is to close at the end of next month.

Phi’s shuttering is another sign of just how challenging the times continue to be for small fashion firm. Austin, Tex.-based Dell, whose husband, billionaire Michael Dell, is the founder and chief executive officer of computer giant Dell Inc., created Phi after designing a sportswear collection under her own name for six years.

Susan Dell viewed Phi an incubator for fresh ideas, initially tapping Tim Gardner as the designer, but he left not long after the launch. His successor, Andreas Melbostad, gave the label a distinct voice. Under the Norwegian’s creative direction, Phi developed a focused point of view that was urban and edgy, often mixing the hard and soft aesthetic with innovative cutting techniques for leather and draping that sometimes referenced bondage themes.

Phi’s collections, presented during fashion week in the company’s 10,000-square-foot penthouse showroom on Ninth Avenue in Manhattan, which could be reached through an atmospheric freight elevator, were widely praised by fashion insiders, but targeted a select group of fashion consumers — so niche that its prospects became too restricted for the label to continue to be viable in the current financial climate.

“If you are putting a collection out there that speaks to a niche audience, which is what we always intended to do, you are defining a much more narrow market for yourself,” said ceo Julia Hansen, who declined to disclose the brand’s volume. “You have made a decision to be niche, and unfortunately the current realities have shrunk that market. This decision wasn’t based on how is the collection doing right now, but it was based on the overarching economic climate and the downward pressure on luxury goods over the next 12 to 24 months.”

Dell, who was unavailable for comment, was less involved in the day-to-day running of the operations, but, “we are in agreement with the decision,” Hansen said.

“It’s just very difficult to look forward with confidence against the opportunity in that market,” she said. “The realization is that for a smaller brand, it’s going to be a very challenging time even beyond 2010.”

The label is sold in about 75 stores worldwide, including Neiman Marcus and Hirshleifer’s in the U.S., Holt Renfrew in Canada, Colette in Paris, Harrods in London, and online at Net-a-Porter.com. Hansen stressed that while the line has had a “stellar” 2009, the decision to close was based on the shifting paradigm in luxury.

This year the company decided aborted plans to open a freestanding boutique on Melrose Avenue in Los Angeles.

Hansen expects to put select items on sale at the SoHo store through January, then stage a “warehouse sale” at the end of that month to clear the existing inventory. She and chief financial officer Mehul Tank will oversee the shut down of the business, which is expected to conclude by mid-spring. The two executives “will make sure that this transition happens with as much integrity and dignity as we have managed our business in the past and that is really important to us,” Hansen said. “We want to make sure it’s done in a Phi way.”

The company informed its 35 employees of the decision on Monday and will offer staffers “transitional support” while the operation is winding down.

Hansen praised Melbostad, who joined Phi after working at Donna Karan, Calvin Klein and with Alber Elbaz at both Guy Laroche and Yves Saint Laurent.

“He was the creative visionary behind this brand and an amazing partner in the business,” she said. “I have confidence that he will find an amazing new chapter for himself and be able to create more beautiful clothes.”