Beginning this resort season, the designer has repositioned capsule collections Addition and Carbon Copy for the contemporary market. 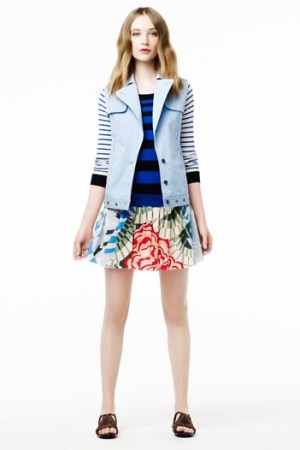 NEW YORK — Since launching Thakoon in 2004, designer Thakoon Panichgul quietly evolved his business with Addition and Carbon Copy, two capsule collections that sat alongside his main line on designer floors. Beginning this resort season, however, he changed his strategy, spinning off the two capsules and repositioning them for the contemporary market.

“In 2009, we wanted to offer a capsule alongside the main line that offered more of a day element,” said Maria Borromeo, chief executive officer of Thakoon. “That became Thakoon Addition, which offered an opening price point of about 15 percent below the main line. It quickly grew and stores began looking at it as its own collection.”

Retailers, Panichgul added, eventually started asking for a more fully merchandised collection from Addition. “We like our ideas to be born out of an organic growth,” Panichgul said. “It’s never about a cheaper price point or diffusion.”

Carbon Copy, meanwhile, was spun off two seasons ago, offering a Thakoon print from a past season in two tones — “almost like a carbon copy,” the designer explained. The top and dress silhouette comes in a T-shirt-like jersey fabric.

“Sometimes the fashion system is so quick that you have to get rid of something good after just one season, even if you still like it and the customer is just starting to feel it,” Panichgul said, alluding to the realities of having to come up with new prints and silhouettes for every runway season. Some prints, he said, should have more lifelines. “This is almost our way of controlling the things we can control,” Panichgul said.

Panichgul is not the first of the younger crop of American designers to push into the contemporary zone — among them Zac Posen with Z Spoke, Doo-Ri Chung with Under.Ligne and Richard Chai Love.

“Addition offered us a way to reach out to a different demographic,” Borromeo said. “At this price point, you can reach out to more stores.”

It will also give the Thakoon brand exposure on multiple floors of larger specialty stores. Bergdorf Goodman, for instance, sells the main line on the third floor and, starting with resort, will relaunch Addition on the fifth-floor 5F contemporary department. Barneys New York, which sells Thakoon on the fifth floor, will now offer Addition on its Co-op floor, while Nordstrom will now offer it on Via C. At stores, it will likely be adjacent to labels such as 3.1 Phillip Lim, Alexander Wang, Rag & Bone, Theyskens’ Theory and Helmut Lang. Panichgul is also designing an exclusive capsule Addition dress collection for Barneys Co-op.

In other news, Panichgul will be launching e-commerce in mid-July, which will focus on the main line including his ready-to-wear pieces from his runway collection.