The Future at Robert Graham

With an investment from Tengram, the brand is setting out to more than double business in the next five years. 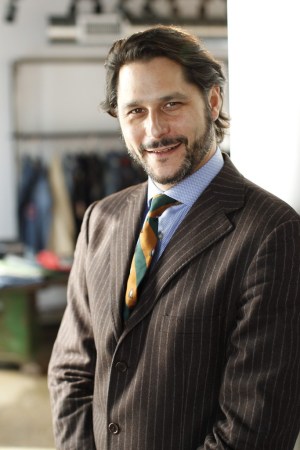 That’s how Michael Buckley, chief executive officer of Robert Graham, described the strategy to build the brand over the next five years.

“I’m here to double or triple the size of the company, but in the right way,” he said. “We won’t take it to the wrong distribution channels.”

Buckley was brought on board when Tengram Capital Partners LLC, the successor fund to Windsong Brands LLC, purchased an undisclosed stake in the brand in June. Buckley, a 25-year industry veteran who served most recently as president of True Religion Apparel Inc., is being charged with overseeing all operations and growth initiatives including domestic wholesale, retail, e-commerce, licensing and international distribution.

Since the investment was revealed, Robert Graham, which has built a $100 million business on the strength of its colorful $200 woven shirts, has already inked licensing deals for tailored clothing and denim. A shoe collection is launching for fall.

Bill Sweedler, co-founder of Tengram, said at the time of the investment that his goal was to “grow Robert Graham into a true international competitor to Paul Smith and Etro.

“We made a significant investment into Robert Graham to acquire equity and provide working capital to bulk up the product offering in the existing distribution channels and the infrastructure to expand” into other classifications, he said.

Sweedler said one of the strengths of the brand is its “very strong following among 35- to 50-year-old men,” many of whom “seek out the product for themselves.”

Buckley pointed to the company’s positioning at the luxury end of the market as another advantage. “It’s well positioned at the top of the market with Neiman’s and Saks, but it’s underleveraged in product extensions,” he said.

Sixty percent of sales come from the woven shirts, he said, but he sees a “whole range” of possibilities for beefing up the business, including expanding into underwear, loungewear, eyewear and fragrance. Children’s wear and home furnishings are also potentially in the cards. “I have knowledge about this space and how to evolve a classification company into a full collection,” he said.

“Wovens are the core of the business,” he continued, “and we think they’ll always be 40 to 50 percent of our sales. That’s our strength and it’s where we started. But it’s about how to leverage ourselves and our licensees. We want to talk to the consumer and see what he needs and wants.”

He said he sees “a big opportunity in footwear and more-casual apparel” to augment the jeans business. “Historically, we’ve addressed the going-out-to-dinner customer,” he added. “But now, it’s also about how to dress him while he’s just hanging out.”

He said the casual end of the market — or “product that surrounds jeans” — holds perhaps the most potential.

Market research has shown that 60 percent of Robert Graham customers make over $200,000 a year. “This is the guy who wants to feel good and has money,” he said.

And those guys are not just in America.

Buckley sees potential for the brand to expand further overseas and said he’s seeking geographical diversification for the label. “It can be great in one market and bad in others,” he said.

Robert Graham is carried in more than 1,500 doors globally in countries including Austria, Belgium, Canada, Dubai, Germany, India, Indonesia, Malaysia, Switzerland, the Dominican Republic, the Netherlands, the Republic of Ireland and the U.K.

Buckley said he sees Asia, other South American countries and Eastern Europe as ripe for expansion. “We just need to find the right partners in Japan and China,” he said.

Retail is also seen as a strong growth driver, he said. He pointed to the company’s one-year-old store in Venice, Calif., as a great laboratory for the brand. “We’ve learned that the consumer wants a lot more from us than wovens,” he said. Bestsellers in that store include blazers, accessories, knits and the Freshly Laundered younger-skewed collection.

“We want to open stores in key markets to showcase the brand,” Buckley said.

Neal Kusnetz, president, said the Venice unit, which is housed in adjacent 1913-era bungalows, offers shoppers an “eclectic” experience with its outdoor deck and fireplace. “We have a high penetration and conversion rate in that store,” Kusnetz revealed, “over 40 percent.”

And while that location cannot be replicated, he said the company is searching for other potential locations. Kusnetz said the plan calls for adding four stores in 2012 and then “we’ll go from there. We’re being very deliberate in what we do.”

In 2008, the firm unveiled an in-store shop program that has since been picked up by 10 specialty stores including Spector’s in Albany, N.Y., Larrimor’s in Pittsburgh, Garmany in Red Bank, N.J., and Andrew Davis in Bloomington, Ind.

Kusnetz said that since the first in-store shops were installed, the dollars and units per square foot have grown with those retailers. “If you have a good brand, shops work,” he said. “The only way to keep growing is to control your own destiny. It’s all about execution.”

As a result, the company is working on a second generation of the shop concept and 14 other retailers have expressed interest in it. “It allows us to take B-level accounts and turn them into A accounts overnight,” he said.

Buckley declined to say whether the ultimate plan is for Tengram to grow the company and then either sell it or take it public. “I’ve been involved with other private equity firms and there’s always an exit strategy,” he said. “For us, that is blocking and tackling and building the brand. We have a lot of work to do over the next couple of years.”

Buckley added: “This brand is unique. There’s a real cult following and retailers are looking for a product with a point of differentiation. This brand has always been able to provide that.”

Kusnetz, who has been with the brand since its inception, agreed. “We’re excited about the private equity investment, but we’ve always kept focused to what we are. We basically created the woven shirt craze and now have six really strong categories in sportswear: woven shirts, knit shirts, sweaters, blazers, leathers and shorts. That’s not easy to do. We work to keep it special and not just make ‘stuff.’ Every sku counts.”