Some labels to watch for at the trade show in Las Vegas next week. 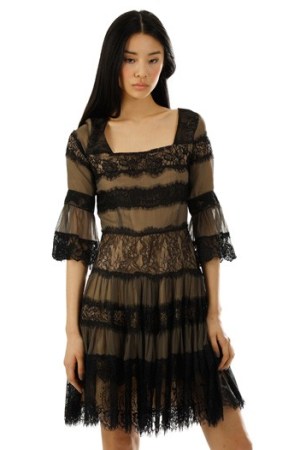 Jessica Moss and Lisa Guajardo are coupling Renaissance romance with the grittiness of the open road at the ENK Vegas debut of their women’s line Leyendecker.

Inspired by the unlikely pairing of motorcycle-riding rebels from the Sixties and Renaissance maidens, Moss and Guajardo have created a fall collection that blends hand-dyed silk chiffon trimmed in Chantilly lace with perforated fake suede. The palette merges from cool, romantic hues like dusty lavender to warm, rugged tints like chocolate brown and wine streaked with tie-dye.

“Leyendecker is all about opposites,” Moss said. “We love juxtaposing things that don’t necessarily go together. There’s a modernity to it.”

The designs reflect the relationship between Moss, 29, and Guajardo, 36, who acknowledged that they’re polar opposites. After bonding as neighbors in Hollywood with nearly identical pet Chihuahuas, they collaborated to launch Leyendecker five years ago with six dresses and tops. Named after Guajardo’s paternal grandmother, Leyendecker now sells at Barneys Co-op, Saks Fifth Avenue, Shopbop.com, Intermix, Planet Blue and Singer22.com.

With wholesale prices running between $45 and $155, Leyendecker is still a small business, which produces everything in Los Angeles, with sales totaling less than $5 million.

“We’re all about making very special and unusual details extremely accessible and wearable so the girl feels amazing,” Moss said.

For her first appearance at ENK Vegas, Evelyn Riddle is bringing a touch of nature with her knits line Capote.

Riddle is integrating intricate weaves that evoke the shape and texture of trees into the tops, dresses and skirts in her fall collection. Muted shades of gray, mauve, brown, camel and brick conjure images of autumn leaves. Using bamboo fleece, yarn-dyed rayon, silk, Tencel and Modal, her designs feel nothing like the tree bark that serves as inspiration.

“I really do focus a lot on fits and making sure the clothes are very comfortable but at the same time a little edgier,” Riddle said.

What gives her classic knits an edge are nontraditional elements such as an asymmetric hem on a scoop-neck top and overlapping panels on the front of a long-sleeve shirt.

Capote has been embraced as alternative career wear by women between the ages of 20 and 50 who want to spend wisely. Wholesaling from $25 to $80, the entire line retails for less than $200. Capote is sold at Anthropologie, Bloomingdale’s, E Street Denim and Atrium in New York, among other stores. Riddle hopes to attract more specialty stores and grow beyond the $1.2 million in sales she tallied last year.

Capote’s success has been somewhat of a surprise for what started two years ago as a one-off collection of ponchos and capes (capote, no relation to Truman, means “cloak” in Portuguese). It’s also a change of pace for Riddle, who merchandises flashy streetwear at Salvage, which, like Capote, is owned by Vernon, Calif.-based Jrid.

“What really interested me [at Capote] was the challenging aspect of finding the element that works with different ages and body types,” she said.

The label, under the direction of Ina Rabinovich, launched last fall on Net-a-porter.com and at select Nordstrom, Bloomingdale’s and British specialty stores. It is known for its sophisticated array of cashmere cardigans and terry-blend sweaters in subdued hues of pewter, chestnut brown, heather gray and iron.

The coming fall collection combines a variety of marl yarns and sheer cashmeres to create an atypical sense of texture and volume in shades of mint green, slate blue, mist and anthracite.

Rabinovich draws upon traditional American sportswear for inspiration and describes Duffy as “the brand for the strong girl who loves black coffee and red wine.”

In its third outing at ENK Las Vegas, Vintage Revolution denim will showcase a combination of pedigree and price point.

VR was founded in 2010 by Jose Juan Marcos, owner of Mexico’s largest denim factory, who in January brought on Michael Press, formerly of Diesel, Paige Premium Denim and AG jeans, as brand president.

The company aims to deflate the price of premium denim with a line that retails for $118 to $148. “Our goal with Vintage Revolution is to offer the same, or better, quality product for a fair price,” said Press.

The brand retails in 450 doors across the country and has launched a program of exclusive pieces with Barneys New York. It is also finalizing a high-end capsule collection, VR Gold, which will launch some time this year. Press has cited requests for petite, maternity and children lines as possible brand extensions.

In Las Vegas, one must take a gamble to get the pay-off, which is exactly what Lauren Shafer did when she joined her husband Jeff’s line, Agave Denim, after a 16-year hiatus from the fashion industry.

As wife of the owner, she has had a small role in the development of the brand since its inception in 2002, but this marks her official debut.

“I would put my two cents in when I was asked — or not asked,” said Shafer, who has expanded the Portland-based line with sweaters, cords, lounge pants, cargos, leather jackets and a wide variety of knits for the fall 2011 collection.

“We had freelance designers here and there, but never a head designer to give it a perspective,” said Shafer, who sewed some of the original samples herself. Her inspiration? “I went to Italy. I was reminded that Europeans don’t dress trendy but they always look put together, even if they look very simple. So the line came out really casual, and everything is meant to be worn with jeans.”

ENK will serve as the debut platform for the expanded line, which wholesales from $30 to $300.