The Bollywood actress may not be a household name in the U.S. yet, but if the careers of past Guess girls are any indication, her star is on the rise. 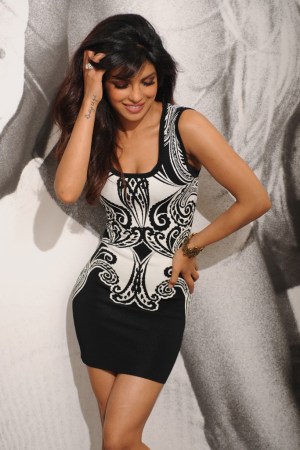 Guess’s newest face, Bollywood actress Priyanka Chopra, may not be a household name in the U.S. yet, but if the career trajectories of past Guess girls are any indication, her star is on the rise. Shot by Bryan Adams, who photographed three previous Guess campaigns, the sexy ads break in the December issues of Harper’s Bazaar, Nylon, Paper, Marie Claire, Elle and WSJ. magazine. Chopra recently sat down with WWD at Guess headquarters in Los Angeles to share her story.

WWD: Your hairstylist Peter Savic introduced you to Paul Marciano, who said you remind him of Angelina Jolie. What did you think when he asked you to do this campaign?
Priyanka Chopra: Whenever I do photo shoots, whenever I have to give references to makeup artists or hair or styling, mostly they’ve been Guess references because I feel the pictures are so iconic. They show women as beautiful, feminine, powerful and yet candid. But being the next Guess girl was something that I would have never thought of, but when I met Paul, he was like, ‘You’re it. It has to be you.’ I’m like their first brown model. For a global fashion brand, for them to move their campaign into a global space, for me it’s an honor.

WWD: What was it like working with Bryan Adams on the shoot in Pasadena two months ago?
P.C.: I never even knew Bryan was a photographer. I just knew of him as an incredible musician, and he’s super famous in India. But when we met, we were just like a house on fire. The vibe was like a young Sophia Loren. I wanted to play characters, and I wanted to be in the mood. I wanted every picture to speak of a story.

WWD: You’ve been making movies for 10 years. How did you get started? I heard that your mom secretly entered you into a Miss India contest?
P.C.: It was actually really random. I went to high school in America, and I decided to go back to India my senior year because I missed my family. I wanted to be an engineer and make planes and go to NASA. I had just done some pictures for the scholarship program I wanted to apply for, and my mom sent them to the Miss India Pageant and didn’t tell me. It was the Millennium year, and she thought it’d be fun. No one expected a call back. And now we had to tell my dad that instead of taking exams I am going to go for Miss India, and then I won, which, again, no one expected. And then I went for Miss World, and at age 17, I became the youngest Miss World. Suddenly I was in front of press from all over the world, speaking about the economy of Uganda or something, and I was this girl who loved reading about nail paint. So I had to grow up really fast. I did a lot of philanthropy work, and then movies happened. My family and I decided to give it a year and a half, then I would go back to school. But my first movie did really well, I won all the awards that year, and then I never looked back.

WWD: Your first album for Interscope Records comes out next spring. What are your musical influences?
P.C.: Before I could even read, I could sing. I really enjoyed it, but I left it because I started doing movies and when this opportunity came, I realized I never had a professional style. So I had to find that. It’s really as eccentric as me. So it has almost every genre I could think of. For the first single, “Exotic” with Pitbull, we shot the video in Miami.

WWD: You said you used to love hip-hop and R&B when you were in high school. Do you still?
P.C.: In my head, I was Left Eye from TLC, with the braids and hoops and those pants and poufy jackets. The Nineties were mine. It was the era of hip-hop when I was in school — Tupac, Dr. Dre, Biggie. I wanted to marry Tupac. I mourned his death for months. I wore only black.

WWD: Is it hard to go out when you’re in India?
P.C.: It does create a little pandemonium, but I like that. I still do what I have to. I’ll still go for a movie. In India especially, to be an actor you need to know people or you need to have a lineage. I had to do it on my own, and I take immense pride in it.

WWD: Do you feel ready to take on the Western market now too?
P.C.: It’s scary, but I grew up partly here too. So I’m an amalgamation of both the East and West. I’m not too American and I’m not too Indian, but I’m a global citizen, and that’s what most people are today. And I don’t want to have to change who I am to try and fit in or cater to a certain audience. Which is why in my music, it’s pop, but I want to keep an influence of what I am, a little bit of India.

WWD: When did your parents stop thinking that you would go to college?
P.C.: I think my mom still thinks that. She always says, “You and your brother are kids of doctors, and one becomes a chef and one becomes an actor. What the hell happened to academics?” I went from being a geek to being a geek’s fantasy.