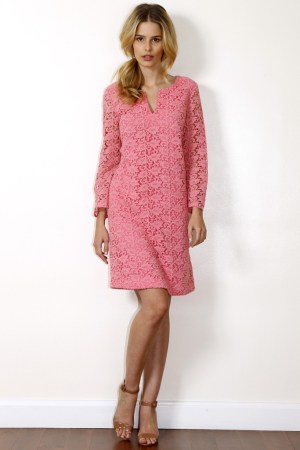 Liz Claiborne Inc. might have changed its name to Fifth & Pacific Cos. Inc. in May, but its signature brand still resonates with shoppers for dresses, suits and eveningwear. The label’s versatile and affordable styles helped with its number-one ranking. Claiborne, which in the Seventies sent a generation of women to work in pantsuits, is now sold exclusively at J.C. Penney, where chief executive officer Ron Johnson sees the brand’s concept shops as a drawing card for his chain.

In May, the company broadened its reach by unveiling Francisco Costa for Calvin Klein, a collection created exclusively for Macy’s. The all-dress group was introduced as part of the department store’s “A Magical Journey to Brasil” campaign. The diffusion line was a first for the Brazilian-born Costa.

Ralph Lauren ranked third for ready-to-wear with VIPs like Blake Lively, Penélope Cruz and Camilla Belle helping to raise the label’s profile on the red carpet.

Nearly 40 years after Lauren designed costumes for the silver-screen version of The Great Gatsby starring Mia Farrow and Robert Redford, the designer reimagined the Jazz Age with more of a modern spin for his spring collection. And in doing so, there were plenty of biased-cut dresses, evening options and pantsuits.

Recruiting celebrity models has helped raise awareness among consumers for Ann Taylor. Kate Hudson is the latest to do the honors for the retail chain, sporting an assortment of dresses and other holiday items. The company has also been upgrading stores with what executives have described as a “highly productive and profitable new concept format,” and managing inventory per square foot.

Having opened a Hong Kong store this fall and with another expected to bow in Shanghai in January, fifth-ranked Vera Wang turned up for Shanghai Fashion Week in October. Strengthening the customer base in Asia is a priority for the company, which is polishing up a 4,752-square-foot Shanghai store that will have three bridal lounges, a VIP suite and a separate entrance from the parking garage, among other things.

Stateside, Wang plans to open a store in San Francisco in January. For spring, Wang translated the languid lines, offbeat embellishments and sometimes tomboyish touches she loves into modern and body-hugging clothes. In July, the designer rolled out juniors apparel and accessories under the Princess Vera Wang label at Kohl’s. The collection is an extension of Wang’s fragrance of the same name, which she introduced in 2006.

Despite having VIP followers like Katie Holmes and Michelle Obama, J. Crew’s president and executive creative director Jenna Lyons’ personal style shows shoppers how to mix and match the label. The much-photographed Lyons is often pictured wearing unexpected combos of J. Crew pieces. The brand landed in sixth place on this year’s Top 10. The strategy is adding up for the $1.9 billion brand, which has upped its presence in Asia. It will open international stores next year and keeps lining up celebrity endorsements.

Seventh-place Gucci recently showed off an assortment of red-carpet dresses when it opened a Taiwan store in late November. Dressing such celebrities as Salma Hayek and Lively is just one of the ways creative director Frida Giannini is reminding shoppers the brand has more to offer than bags and other accessories.

Rounding out this year’s survey were Jones New York, Talbots and Michael Kors in the eighth, ninth and 10th slots, respectively. In November, Jones promoted Cynthia DiPietrantonio to chief operating officer, and she now oversees production for its overseas facilities, including its production offices in China and Hong Kong. Talbots president Lizanne Kindler is banking on versatility for its customers. “We truly believe that the key to our success is about providing our dedicated customer with an assortment of dresses, pants, knits and specialty tops,” she has said.

Kors, meanwhile, which has set a high bar with its highly successful public offering, recently hired Ron Offir as senior vice president of e-commerce to make more of a global push with that business.