During the last six months, the company has been experiencing a quiet renovation. 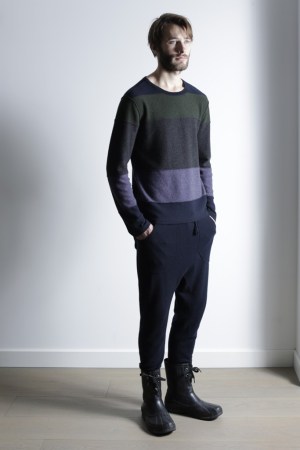 Since launching in 2003, Inhabit has built a fiercely loyal following for its slouchy knits, both women’s and men’s. During the last six months, the company has been experiencing a quiet renovation. Susie Cho, the label’s founding designer, left to pursue new opportunities. In her absence, Inhabit’s president and founder Stacey Perlick chose to leave the women’s collection in the hands of the studio design team, but she had something more specific in mind for the men’s collection: Tom Scott, the knitwear designer, whom she hired to take over men’s design last summer.

“He was my first phone call,” said Perlick. “I’ve always liked the artisanal quality of his work and I wanted that kind of feeling for men. I wanted it to be lighter, easier, more playful but for the everyman.” A sense of humor has always been key to Scott’s aesthetic. His women’s collection, which he operated from 2001 to 2011, was known for its experimental proportions and kooky shapes that drew a following at edgy stores, such as Ikram, Barneys New York and in the Japanese market. “I was doing all these sweaters that had four sleeves and you’d wrap them around like a belt,” said Scott. “It was very tricky and niche, but even I got bored of doing that.” His vision for Inhabit is far more toned down, with an emphasis on color, texture and interesting details to rev up classic silhouettes. “It’s not garish or crazy looking but maybe there’s a little bit more of a fashion edge without taking it too far,” said Scott.

He began with the palette — ocher, purple, olive and bright blue and orange, as well as plenty of the basic black, charcoal and navy. There are subtle color-blocked crewnecks and V-neck cardigans, styles that combine a 12-gauge body with a five-gauge neck trim, inside-out seams and quilted textures. Scott has also added a range of accessories that feature quirky yet functional details, for example, a double-knit reversible hat, color-blocked gloves and scarves with a loop-through closure inspired by Scott’s experience as an avid cyclist in New York City. For the first time, he’ll also be offering bottoms — cashmere and cotton sweatpants and boxer shorts. The idea is to cover more categories in a multitude of weights and gauges from fine cotton to 100 percent cashmere and woolens, all of which are produced in Hong Kong with Italian yarns. The collection is priced between $120 and $300 wholesale and will launch at Project/ENKNYC Jan. 21 to 23 in New York.

Perlick sees great potential in the men’s market. As of now, Inhabit’s business is 70 percent women’s, 30 percent men’s, but Perlick would like to shift that to 60-40. Barneys, Scoop and Fred Segal Trend are among the label’s biggest retail partners. “There’s real opportunity for men’s,” she said. “Over the years, the stores have been asking for more from us and the men’s collection was kind of the lost child. We needed to put more focus on it.”