The inspiration for the unisex capsule is Black unity and community, with the Pan-African flag a point of reference.

Some looks from the Tommy x Patta capsule.

Tommy Hilfiger, which is owned by PVH Corp., is collaborating on a spring capsule collection with Patta, the Amsterdam-based streetwear brand.

The Patta x Tommy capsule will be available via the Patta retail network and PattaxTommy.com globally, beginning Friday at 1 p.m, CEST, and via selected wholesale partners starting April 16.

The inspiration for the capsule, which is one drop only, is Black unity and community, with the Pan-African flag a point of reference. The signature white, red and blue Tommy colors have been replaced by the traditional Pan-African colors of red, black, green, putting African culture at the forefront. 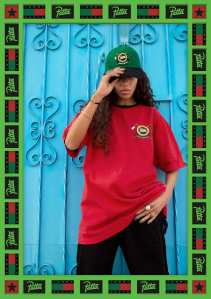 A look from PattaxTommy  courtesy shot.

The Patta x Tommy campaign aims to shine a light on the multifaceted nature of life in inner cities. Nigerian filmmaker Dafe Oboro shot video assets in Lagos, Nigeria for his short film, “Two Becomes One,”  which is based on the concept of merging unrelated things together, such as when two ideas, persons and communities become one.  Moroccan visual artist Hassan Hajjaj photographed the campaign.

To further underscore the collection’s message, Patta has produced “Katibo Eye,” a documentary directed by award-winning Dutch film director Frank Zichem, which will be available to watch at PattaxTommy.com for a limited time. The film follows Clarence Breeveld, a Suriname-born man living in the Netherlands as he attempts to trace the shipping route from Ghana to Suriname traveled by his enslaved ancestors.

The collection, available in adult and kid sizes, includes T-shirts, hoodies, sweatshirts, outerwear, jeans and baseball caps. Across the range, a hybrid Tommy Jeans flag is crossed with a Pan-African flag, which sits above the Patta logo and capsule theme of “Unity is Strength, Division is Weakness.” One of the T-shirts features the message, “Great Principles, Great Ideals Know No Nationality.”

As part of the partnership, Hilfiger and Patta will donate to the Black Archives in Amsterdam, Sistah Space in London and The Good Neighborhood Collective in Milan. 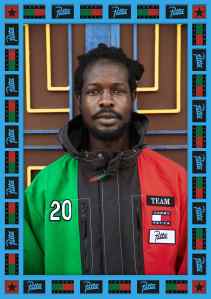 A look from PattaxTommy  courtesy shot

Patta, meaning shoe, was founded in 2004 by Edson Sabajo and Guillaume “Gee” Schmidt, who were both prominent figures in the Dutch hip-hop scene in the ’90s and early 2000s. Today, the Amsterdam Patta store, which features sneakers and streetwear, is located on the historical Zeedijk street. In 2016, the London Patta store opened its doors in the middle of Soho, and in 2019, Patta opened a store in Milan. Over the years, Patta has collaborated with the likes of Nike, Levi’s, New Balance, Asics and Umbro.

Tommy Hilfiger at 35: Still Revved Up and Rarin’ to Go