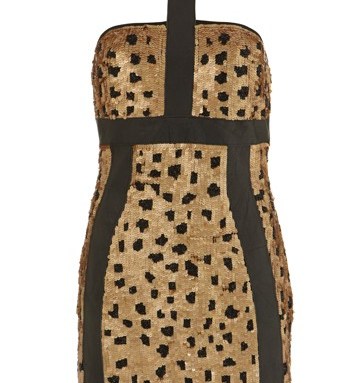 Topshop’s new collection, Dress Up, should do well in its flagship in Las Vegas opening in March. It does, after all, feature sequins.

“Dress Up, is just that: very elaborate, embellished pieces in fine silks and satin with beading and sequins,” said Sir Philip Green, the owner of Arcadia Group, parent company of Topshop and its men’s counterpart, Topman. “It will probably do quite well in Las Vegas, where we’ll have a bigger assortment of ‘going out’ apparel. Dresses is one of our strongest areas and evening shoes is also one of our strongest sellers. We’ll buy deeper into those categories. ”

The flagship, which will have 180 feet of frontage, will cost $8 million to $10 million to build, Green said.

While Dress Up seems tailor-made for the Las Vegas unit, Green said “there was a hole in the market for all of our customers. When we were figuring out something new to introduce, [we found] there was something our customer was missing, a cocktail dress at a $120 price point or a long silk gown you could wear to a wedding for $350.”

Dress Up has several distinctly Vegas-like offerings such as a multicolored sequin dress with stars and geometric shapes and multicolored beaded fringes on the sleeves and hem; a strapless pink confection with tiny pleats, tiers of ruffles, black ribbon and overlapping seashell-shaped fabric on the bodice and a gold sequin dress with black leopard spots.

Green said lease negotiations are taking place at several locations simultaneously. “We’re still looking at something else in New York, as well as Los Angeles and Miami,” he said. Las Vegas’ economic difficulties haven’t given him much pause. “Every city’s been through a downturn,” he said. “There’s a lot of local people. There’s still sufficient people in the city.” Besides, the Las Vegas unit “is a fairly large store, but it’s not 100,000 square feet like the London flagship.”

Topshop, which opened a flagship in Manhattan’s SoHo in 2009, is learning what New Yorkers want. “They like to stay in fashion,” he said. “We’re not selling T-shirts and jeans. Trends is what they want to buy. We’ve got people on the ground in Las Vegas and Chicago. We’re doing our homework.”

A Topshop/Topman flagship at 830 North Michigan Avenue is scheduled to open on Sept. 7 or 8. “It would be nice to have Mrs. Obama as a customer,” Green said, but added that he’s made no outreach to her. “We’re definitely looking to do pop-up stores in Chicago and Las Vegas. It’s good for familiarizing customers with the brand. If you do it off-site, in an area that’s not near the store, you can reach a new customer base. We did one in the Hamptons on June 18 for customers that don’t necessarily make it to the [SoHo] store.”

The Chicago store will have two entrances, one on North Michigan Avenue and another on Pearson Street. About 100 exclusive pieces are being designed for the store, including two suits, one in black lace and the other in yellow and black.

The opening of a Toronto flagship is being slightly delayed until the second week in September due to building issues, Green said. Topshop/Topman recently opened a pop-up shop there, so Green wants to do something different, probably linked to the Toronto Film Festival, Sept. 7 to 18.

Topshop/Topman will be entering Brazil in February or March and Australia is also on tap. Green said he’s negotiating to open stores in Mexico. He’s also found a site for a new flagship in the U.K., near West Ham and the 2012 London Olympic Park. “It’s exciting to open in places where you’ve never operated before,” he said, “going into new territories, learning new things, learning about new markets.” Referring to Las Vegas, he added: “I’ve wanted somewhere else where I can stay up late.”