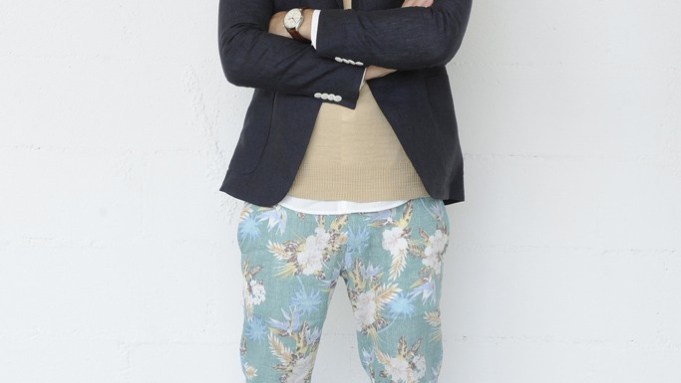 PARIS — Now is the time to be in the men’s wear industry.

Full of enthusiasm for the continued interest in men’s fashion, buyers at the Capsule and Tranoï shows here have been enjoying strong growth in the category — growth they see continuing.

“We are so hopeful, because we see this upswing in men’s wear, and we luckily chose men’s wear as our direction. We feel we’re in the right place,” said Katie Liu, a partner at Harvey Nichols’ fashion office, and co-owner of the New York showroom, Black Dog. “I think American men are just more conscious of their own style, whereas 10 years ago, American men really didn’t pay attention to fashion or personal style. And now, thanks to the younger generation who are evolving, who are into the fashion blogs and magazines, they are helping the whole industry,” added Liu, speaking at Tranoï, held here June 29 to July 1.

Wanda Colon, vice president and divisional merchandise manager of men’s Co-op for Barneys New York, agreed. “I feel very optimistic about the energy in Paris,” she said. “What is compelling right now is that you see elements from street, urban and sportswear all combining, but with high-end fabrics.” She said social media and the youth culture are exposing ideas and sharing information quickly, and in general, designers have been doing a great job. She loved the Stutterheim collection of Swedish raincoats at Capsule, for “doing one concept well, and elaborating on that with an artisanal way of making contemporary sportswear.”

Strong trends at the shows included a lot more tailoring, with pieces that could be worn for work, an evening out or the weekend. Many outfits combined T-shirts with elegant suit jackets, or even a formal shirt and jacket with dressier interpretations of sweatpants or drawstring pants, or printed or lightweight slacks rolled up at the ankles. A wide range of colors, including some darker shades more common for colder seasons, plus daring patterns made with fabrics that would normally be associated with women’s wear, were also widespread.

“There is a new customer who is interested in a piece of clothing for what it represents in its modernity, whether suits, sportswear or casualwear,” said Tancrède de Lalun, merchandise manager for men’s and women’s wear at Printemps, while visiting Capsule. “The customer is shifting…more toward tailoring.” Noting the department store’s budget is increasing, he said, “These brands will grow and develop because they talk about fashion, and men who buy fashionable items buy them at full price and when they feel like it, they don’t wait for sales, and they’ll buy more and more because they’re increasingly numerous. So there’s a huge potential.”

Kirill Odnoetkov, men’s wear buyer for Babochka department store in Saint Petersburg, Russia, was drawn to the brand Two Italian Boys at Tranoï, because “they are doing trendy things that are still tailored, with a nice total look, and I think that’s the future, because now everything is about this street style on the Internet, and I think it will continue to grow.” Odnoetkov said the company just opened a concept store called Nevsky 152 in Saint Petersburg, for which he was hunting for new, younger brands at more affordable prices. “We need to develop, because the men’s market is going further and further, and we need to stay in touch.”

He was also drawn to the French brand Saint Paul, which showed subtle prints that played on patterns found in wood grain. “Their fabric quality is really nice, so it’s a real luxury shirt with a nice twist. The price-to-quality ratio is also right,” said Odnoetkov.

However, Armand Hadida, Tranoï’s artistic director, warned that despite growth potential, male shoppers still need “help” navigating their way in fashion. “What is missing in the market are good ambassadors, good salespeople, who help customers evolve their ways of dressing,” he said. “The reality is that the market has been slow at waking up, because I’m sure a large number of men would like to access other styles but can’t find the right therapist to help him. We need to comfort and reassure men so they can finally dare to come out of this shell and break the mold of the ordinary suit and tie,” said Hadida.

Buyer Sebastien Paoli, who runs the men’s store Purple in Marseille, was especially taken with the Paris-based brand Marchand Drapier at Tranoï, whose collection illustrated the shift toward the much-sought-after balance between chic tailoring and casual comfort.

“In the beginning, Marchand Drapier was part of a much more dressy, very classic category, but I modestly asked him [brand cofounder Benoit Carpentier] to open up a little on the casual side, which would allow us to slightly lower prices,” said Paoli. “So he opened his range to more weekend-style shirts, Bermudas, with materials that are a little less formal, and it’s working even better now. It’s true that today, people no longer want really formal suits that they’ll put in their closets and never wear again.”

Mats Klingbert, owner of Trunk in London, said his budget was up 20 percent, and that the store “does well in this smart casual category, where it’s not too overdone, and people still want to look well-dressed but not like they’re trying too hard. You should look quite effortless.” At Capsule, he liked the French brand Arpenteur for its “very relaxed workwear and easy style,” as well as the new German brand Merz B. Schwanen, which he said uses Thirties looms to make T-shirts.

CWST, a new Los Angeles brand pronounced “quest,” launched its collection at Capsule with a sophisticated, relaxed style using top-quality fabrics. Designer Joe Sadler, who used to design for the California-based Riviera Club, said he was inspired by “the Pacific man” for this collection he compared with Seventies chic without being vintage. “This is the natural evolution to the Riviera Club man: a little more grown up, a little more sophisticated,” said Sadler. The collection included drawstring slacks that could be worn “to the supermarket or work,” thanks to the heavier, dressy quality of the material, as well as a custom-designed nautical depth chart print used on hidden details.

At the same show, Italian brand Golden Goose Deluxe Brand showed its capsule Haus collection, which visitors appreciated for mixing sophisticated but basic sportswear with a lifestyle presentation around the theme of the urban designer, including nonapparel items such as stationery. “It feels modern and fresh, and it’s standing out,” said Arnault Castel, buyer for the Hong Kong chain Kapok. He said his 25- to 35-year-old customers had been raised on “the comfort of sportswear, and now that they are older, they don’t want to give up that comfort. They can’t go back to something too rigid, but they also have to dress like they’re more grown-up.”

At Tranoï, Japanese brand Kaval launched its first collection using antique, 150-year-old Japanese fabrics patched together in romantic forms that pay homage to more than 400 years of Japanese tradition and skill centered around the apparel manufacturing district of Ryomo, where the brand is based. Items included traditional Mashiko ceramic buttons made locally, textiles once used for kimonos and many indigo dyes.