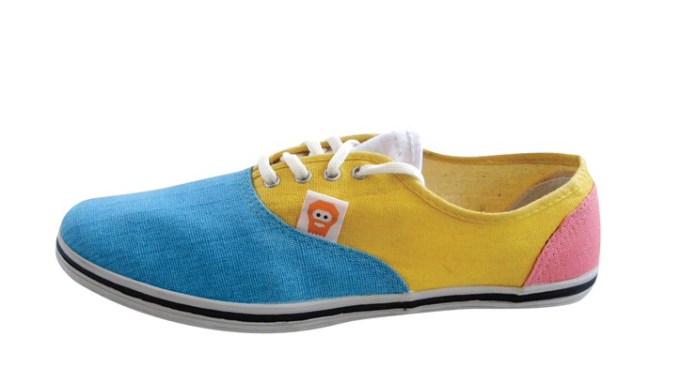 ▲ U.S.
Vans — Off the Wall: Stories of Sole from Vans Originals by Doug Palladini ($24.95) details the Southern California shoe brand’s 43-year history. After helping Seventies shredders such as Tony Alva grip narrow boards with wafflepatterned rubber soles, Vans collaborated with artists including Robert Williams and formed part of the uniform for mosh pits fueled by the driving beats of Rancid, No Doubt and other bands at the Vans Warped Tour. This book tells the whole story, with enough photos for even the most die-hard fan. —Khanh T.L. Tran

▲ ITALY
For summer, Superga has teamed up with Disney for a line of sneakers splashed with iconic characters including Mickey Mouse, Minnie Mouse and Donald Duck ($108 to $162). —Alessandra Turra

▲ BRAZIL
Young Brazilian girls are in love with low-cut Converse All Stars, such as this pink-splashed beige model ($34). Other hot versions include the traditional black-and-white style and a sweet lilac pair. —Mike Kepp

▲ SWEDEN
Founded in 2006, cult handmade Swedish sneaker brand Jim Rickey takes inspiration from Scandinavia’s design tradition. Prices start at around $95 for a canvas style, and top out around $280 for leather. —Katya Foreman

▲ GERMANY
German hipsters don’t shoot a lot of hoops, but that doesn’t stop them from coveting Adidas’ cult Seventies basketball classic, the Top Ten Hi Sleek ($140). While the guys are going for garish colors, the big sell with girls is this black patent leather version, to pair with leggings or super-skinny jeans. —Damien McGuinness

▲ AUSTRALIA
Gideon, whose sneakers are ethically manufactured in Vietnam, donates a portion of every sale to an arts initiative called the Hiphoperations Desert Projects. The candycolored canvas plimsoles (approximately $30) are exclusively sold in Australia at the General Pants streetwear chain. —Patty Huntington

▲ PHILIPPINES
Trust Lanvin to make sneakers a spectator sport. Black and white never goes out of style, like these Lanvin for Fred Perry spectator sneakers, a collaboration between Lucas Ossendrijver and Alber Elbaz ($500). —Bambina Wise

▲ FRANCE
Founded in the Thirties and named after Hungary’s national soccer team, Hungaria was responsible for shoeing over half of the soccer players in the French Premier League teams by the Seventies. In 2007, the brand returned with a vintage-inspired sneaker line. Prices run from $70 for canvas to $170 for leather. —K.F.