When Black Fleece, Thom Browne's collaboration with Brooks Brothers, launched in more than 30 of the specialty retailer's doors last fall, many in the... 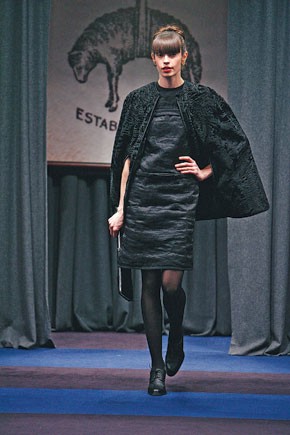 When Black Fleece, Thom Browne’s collaboration with Brooks Brothers, launched in more than 30 of the specialty retailer’s doors last fall, many in the industry thought the partnership seemed like a mismatch given the line’s high price tags and fashion-forward looks.

But is it? Can the classic Brooks Bros. look expand to include the ankle-high pants and shrunken jackets for which Browne has become known? How would the sales staff deal with the dichotomy between the retailer’s easy American style and the designer’s at-times rigid one?

WWD asked me to find out. But since Browne is known primarily as a men’s wear designer, I needed help — and found it when my boyfriend, Kevin, said he was going to have to swing by Brooks Bros. to pick up some basics. “I’ll go with you,” I said, somewhat too eagerly. “Would you mind helping me with work?”

I tried to dress preppy for the task: a cream Diane von Furstenberg dress with an Hermès neck scarf, or perhaps a black Burberry dress with Tory Burch riding boots? But as soon as we arrived at Brooks Bros.’ Madison Avenue store, where the women’s section presents sweater sets over plaid pleated skirts, I realized my efforts may have been for naught. Kevin just dressed as Kevin, which worked.

The store’s men’s Black Fleece section was notably empty. The old-school Brooks Bros. sales force steered clear of the area, and instead a salesman who could have been the Thom Browne poster boy — petite and sprightly in his cropped gray suit — proved incredibly helpful. All of my prepping of Kevin (“Act confused about the fit; ask if you need other sizes; pick out the craziest patterns to shock the conservative Brooks Bros. attendants”) was lost on the sales associate, who was totally versed in all things Thom Browne.

Kevin played the out-of-place man well, eyeing the salesman uneasily. “What do you want me to try on?” he whispered to me. “Try on what you would normally least gravitate to,” I whispered back. So he asked to try a red and cream plaid three-piece suit — but the sales clerk wisely steered him toward a gray pinstripe one.

“It fits kind of…weird,” Kevin said in a meathead voice clearly meant to make our salesman think he was being tortured. “It’s really tight in the arms and across my chest. And there’s no middle button.” He pointed to how he’d been forced to button the top button of the jacket. Kevin wasn’t altogether opposed to the slim pants, despite reservations with the button fly — though he’d be unlikely to tailor them to capri length.

After about 20 minutes, the well-groomed salesman admitted Black Fleece perhaps wasn’t the best fit for the 6-foot, 2-inch, college-rugby-captain Kevin — his shoulders and chest were too broad for the narrow cut.

Somewhat defeated at how easily the store passed the test, I trekked uptown to the National Academy Museum and School of the Fine Arts, where Thom Browne himself was speaking at a symposium.

Introduced as the most influential men’s wear designer of today, with his fitted, shortened trousers and blazers influencing the shapes of men’s wear through less exaggerated forms, Browne said Vogue editor in chief Anna Wintour had asked him what design house he would like to collaborate with. “For me, as an American designer, it would be Brooks Bros.,” Browne said. “The most important thing was being true to Brooks Bros. as a brand. It was about taking a reference and changing it in a way where it doesn’t just feel re-created. Like I turned the traditional riding coat inside out.”

He added that he “wanted the guy and the girl to look like they came from the same world.” Whereas Browne took inspiration from women’s wear for his men’s line (using everything from French lace to bustles to create his suits), he uses men’s wear as the inspiration for his first women’s line to “promote an androgynous world that never existed before,” Browne said. “Just like I turn women’s inspirations into men’s, in order for women’s to be interesting, I do the same for women’s. I love seeing girls in suits, and that’s what I know best from my own world.”

Inspired, I walked to Brooks Bros.’ Fifth Avenue flagship, explaining to a saleswoman that I had just seen Browne speak and wanted to try on his Black Fleece collection. She couldn’t have been more excited. The whole line had been marked down 25 percent that morning, and she gave me a tour of the Black Fleece women’s shop-in-shop, showing off everything from $300 sweaters to $1,400 blazers to $2,500 plaid capes. “I’m intrigued with it all,” I said. “Cutie,” she responded, “then you will try it all!”

The clothes are sized 0 to 5, as opposed to traditional sizes, “because the clothing fits so differently,” Browne had explained. I usually wear a 0, so it seemed like an easy call to wear a 0 in this. So wrong. A size 0 blazer was too tight across the bust (which never happens with other brands); in a 0 pants, the waist was uncomfortably snug (provided I wanted to breathe), and a dress in that size was too small in the hips but huge in the waist. Each time, I asked, “Is this how it’s supposed to fit?” The answer was always a less-than-convincing yes — until the saleswoman started bringing me size 1s.

Once offered the correct size, I could appreciate the beauty of the fabrics and the ideas, such as how the lining of a vintage Brooks Bros. riding coat became a striking cape. Still, I sympathized with guys who complain about Browne’s tight armholes and constraining fits.

Nonetheless, I departed with a $1,000 boiled wool dress in hand and the hug of my sales clerk — delighted to make what perhaps was the first Black Fleece women’s sale of the day.

Venturing upstairs to buy the fitted gray wool pants I had made my boyfriend try on, I spotted another man, also at the mercy of a manipulative woman, complaining the armholes of the jacket he was trying on were uncomfortable. “Do I need a bigger size?” he asked. “That’s the biggest size we have,” replied the salesman, who was clearly less of a Thom Browne devotee than the associate at the Madison Avenue store.