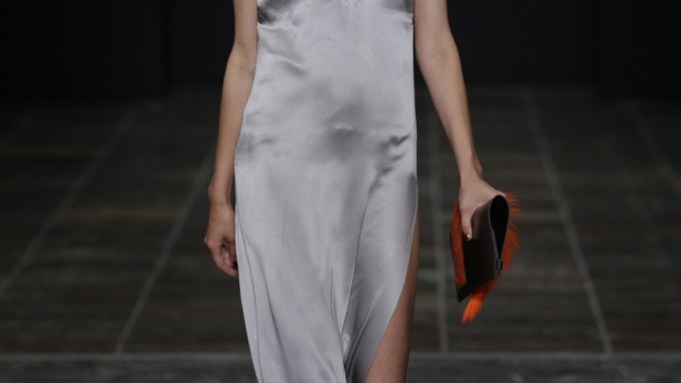 COPENHAGEN — An optimistic mood reigned at Copenhagen Fashion Week, which ran from Wednesday through Sunday against a backdrop of encouraging statistics.

Total exports of Danish fashion increased by 2.6 percent in the first five months of 2013 to 9.2 billion Danish kroner, or $1.64 billion. Germany was the biggest driver, with exports up 9.3 percent.

Dansk Fashion and Textile, the trade association for Danish textile and clothing companies, expects Denmark’s fashion business to grow 2 to 3 percent this year following a 3.7 percent drop in 2012, when exports fell 3.3 percent.

Klausen attributed the good numbers to the flexibility of the Danish workforce and the government’s support by organizing export credits.

As part of its efforts to boost exports, which account for 57 percent of the Danish fashion industry’s output, the Danish Fashion Institute put on “The Jewelry Room,” an exhibition showcasing 15 local brands, including Georg Jensen, Shamballa Jewels and Ole Lynggaard, at the Design Society. Organizers said the show drew some 300 visitors.

RELATED STORY: They Are Wearing in Copenhagen >>

“We are highlighting jewelry as separate. At the fashion fairs, they blend in between fashion brands [and don’t necessarily stand out enough],” said Eva Kruse, ceo of Copenhagen Fashion Week. “There is a story line on Danish jewelry that hasn’t been told, it is such huge part of the [industry].”

The wholesale domestic market for Danish jewelry was worth around 1 billion Danish kroner, or $173 million, in 2012, while wholesale exports were about 8.5 billion kroner, or $1.47 billion, according to the Danish Jewelry Association. Dollar figures are calculated at average exchange rates for the periods in question.

While heavyweight Pandora represents the lion’s share of jewelry exports, a flurry of up-and-coming brands including Maria Black, Monies and Sophie Bille Brahe are making their way internationally.

Meanwhile, fashion shows were happening full steam in the city.

Model Lindsey Wixson walked the runway of rising talent Freya Dalsjø’s show. Hers was one of 32 women’s and men’s labels that showed this season, including men’s wear designer Asger Juel Larsen, who made his Copenhagen runway debut; Anne Sofie Madsen, and regulars such as Wood Wood, Baum und Pferdgarten and Henrik Vibskov.

There were some new highbrow locations. Designers Remix held its show in the new aquarium Den Blå Planet, the largest in Northern Europe, while By Malene Birger’s presentation and dinner took place in the historic d’Angleterre hotel, which reopened last spring after undergoing a complete refurbishment.

Marimekko made its comeback to Copenhagen Fashion Week with a show at the City Hall. The Finnish brand opened a new 1,680-square-foot store in the city, a stone’s throw from the Louis Vuitton flagship.

Designer Stine Goya also opened her first boutique last week. Seven years after she launched her brand, the graduate of Central Saint Martins in London is growing a global footprint. Her collection for spring 2014 — the first season with her new agency Tomorrow, which also counts Jonathan Saunders and Richard Nicoll among its labels — is set to be presented in the agency’s showrooms in London, Milan and Paris. “We have been focusing on Scandinavia, now we want to go further abroad,” Goya said. She currently sells in around 80 doors, half of them outside Denmark.

Crown Princess Mary of Denmark, sporting a polka dot dress from Danish label Bogelund-Jensen, visited the Copenhagen International Fashion Fair, one of the three trade fairs — along with Gallery and Vision — that the region offers.

CIFF organizers said visitor numbers were down 8 percent versus last August to 20,123, citing a change in the rules for registration allowing only visitors with buying power to the fair this time, while students, sourcing and supply people were denied. Continuing with its major re-branding, CIFF enlarged its Crystal Hall, showcasing a mix of avant-garde Scandinavian, British and Paris-based brands such as Ron Dorff, L’Homme Rouge and Christopher Raeburn.

Gallery reported 11,490 visitors, down 5.8 percent from the same period last year, of which 76 percent were Scandinavian and 7 percent German. Vision, which did not provide visitor numbers, named Copenhagen student Mathilde Maalouf winner of its Designers’ Nest competition.

Buyers were upbeat about the region’s fashion offer.

Sam Lobban, men’s wear buyer for Mr Porter, noted Copenhagen Fashion Week takes place toward the end of the men’s wear buying season. “But the traditional spend-all-your-money idea no longer exists. You are always in search of the best product,” he said, citing L’Homme Rouge and Astrid Andersen as ones to watch. Mr Porter already works with denim and clothing label NN07 and bag maker Mismo.

Michael Lochner, a buyer from EGB Shop München, said he bought three brands at Gallery, including LeonLouis, in addition to new pieces from Barbara I Gongini, a brand the store already stocks. “I personally like to wear her black leather style, that I pair with Cinzia Araia shoes,” said his colleague Noura Elmassaoudi.

For the first time, Vision and Gallery will start on a Wednesday and end on a Friday, a day earlier than usual. Organizers cited a big consumer weekend on Feb. 1 and 2 in Denmark, where stores are open the first Sunday of every month, as the main reason. The new opening date is also in line with the recent collaboration with Who’s Next Prêt-à-Porter Paris, which ends Jan. 28.

Copenhagen Fashion Summit, an event focusing on sustainability that takes place every other year at the Copenhagen Opera House in Denmark, will be held on April 24, 2014.