Backstory: Aussie Michael Angel, 32, had quite a prolific styling career before launching his own line. 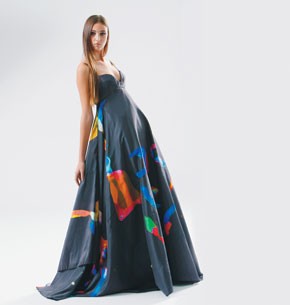 Backstory: Aussie Michael Angel, 32, had quite a prolific styling career before launching his own line. At the age of 16, he began working the sales floor at contemporary label Saba, becoming its visual creative supervisor eight years later. Subsequently, he logged hours with companies from the Melbourne Fashion Festival to streetwear label Vicious Threads, where he was creative director, to sports juggernaut Oakley, which hired Angel to revamp the line in 2000. Maybelline, V Magazine, Rolling Stone — he’s styled for them all as well. But he’s an artist, too, quietly churning out a steady stream of paintings. This spring, he’s finally putting them to use: His launch collection’s focus is on his handmade prints.
Collection: “I wanted to create the ultimate art smock and modernize it,” says Angel about the concept behind this collection. To that end, there are a number of fluid silhouettes: unstructured gowns, shirts and hooded dresses shaped like a comfy boxer’s robe. The prints, meanwhile, are bold, ranging from abstract watercolors to digital paint splatters. “I love saturated color,” says Angel, who’s now based in Brooklyn. “I’ve got a whole catalogue of my artwork I’m dying to get out.”

Stats: The collection starts at $80, wholesale, for a T-shirt and goes up to $2,500 for a printed silk gown. Retail venues have yet to be determined.

Backstory: “Not a lot of people from Kentucky want to be fashion designers,” says Brandy Lunsford, who nonetheless credits her design career to her Southern roots. She grew up in Kentucky, admiring her grandmother’s Old South sense of style and competing as a world-class equestrian. The latter, she says, gave her the discipline to start her own collection at the age of 25. Before launching Harlan Bel — named for her mother’s native Harlan County, Ky., and her initials — for fall 2007, she attended Parsons the New School for Design. While there, she upped her styling and design skills with internships at VPL by Victoria Bartlett and Jill Stuart and then, after graduating in 2005, took a position at Ralph Lauren Rugby.

Stats: A silk top wholesales for $93 and structured bra tops, skirts and dresses range from $109 to $272. The collection will be available at Armoire in Brooklyn, Big Drop in Manhattan, Milk in Los Angeles, Jaime Malibu in Malibu, Calif., and buydefinition.com.

Backstory: What’s in a name? For 25-year-old Christian Cota, plenty. The Mexico City native’s surname is actually Rodriguez Labastida Cota Woods, but professionally he chose to go with Cota, the maiden name of his paternal grandmother, because she had the greatest fashion influence on him when he was a child. “She was always dressed to the nines and wearing her perfect pearls,” recalls the designer, who previously worked at Angel Sanchez. “She pushed me to be looking at elegance.” In fact, when his grandmother found out that the Parsons The New School for Design grad had finally set his sights on a career in clothing design, she made sure to put in her own two cents. “She made me promise never to show any parts of the body, like breasts, that you didn’t have to see,” Cota says.

Collection: Cota’s spring debut was inspired by myriad things — from the Fifties and Sixties jet set to the Moroccan coast to New York City and Central Park — but the first and the most intriguing of his muses was a stingray he encountered during a recent swim in Acapulco. Fortunately, Cota kept the marine-animal references subtle and to a minimum. Case in point: the chiffon dress with allover paillette embellishments in graduated hues, which create a scale-like effect. The rest of the collection has a similarly organic feel, but served up in a supremely ladylike manner that would have made grandma proud.

Stats: Wholesale prices for Christian Cota, which has been picked up by Wynn in Las Vegas and vivre.com, range from $280 for shorts to $1,400 for a gown. Cropped jackets, meanwhile, go for $380; embroidered tunics, for $800, and trenchcoats, for $970.

Backstory: Marsha Welcher arrived in New York in 2001 straight from the wilds of Wisconsin, studying business at the Fashion Institute of Technology while pursuing internships at Harper’s Bazaar, Valentino and Marc Jacobs. Officially ensnared in what she calls “the fashion girl thing,” she began stitching up kicky cocktail dresses for herself and friends-about-town who were in need of new looks for all their evenings out. After two-and-a-half years in the Lucky accessories department, as well as a freelance styling stint, Welcher found herself with more dress requests to fill than photo shoots to prep, and voilà: A line was born, launching for fall 2007.
Collection: The name Thayer is an homage to Welcher’s grandparents, whose home was on Thayer Avenue. It’s also her grandmother’s maiden name. The spring lineup, consisting of thigh-skimming satin shifts and fleecy wrap dresses with ruched waists, as well as shirts, shorts and jackets, is inspired by Welcher’s downtown friends — so much so that each dress is named for one. “I’m always looking to what’s current, whether it’s a music video, a new movie, a person passing me on the street, but it’s really the girls I met in the fashion industry who I have in mind when I design,” Welcher says. “They’re the best-dressed girls in the world.”

Stats: The fall collection is currently sold exclusively at Shopbop.com. Come spring, the pieces will wholesale from about $53 to $220, and be sold at more than 30 boutiques worldwide, including Plum and Key in New York.

Backstory: Karen O, lead singer of the Yeah Yeah Yeahs, has sported many a wild getup over the years, all courtesy of designer Christiane Joy Hultquist (who goes by Christian Joy professionally). Joy recalls a fringed minidress created out of “pasta that I overdyed, so it’s basically made out of ziti.” Then there was the sequined fish costume the singer wore to perform at the McCarren Park Pool in Brooklyn. Joy, who costumes Karen O for all her stage appearances, videos and red-carpet events, had no formal fashion training. She got her start, instead, working as a shopgirl at The Antique Boutique and Daryl K in downtown New York and creating deconstructed dresses in her spare time. She met Karen O when the rocker walked into Daryl K. Joy parlayed this exposure into a capsule collection for Topshop in June, as well as a gig dressing the U.K. new-rave sensation Klaxons. Spring 2008, however, marks her first formal collection

with a showroom.
Collection: Despite her reputation for gonzo glitz, “I set a lot of boundaries for this collection,” Joy says carefully, adding that she was trying to avoid the label of “crazy designer.” The line, in fact, is a marked departure from her costume work, featuring simple raw silk dresses, mostly in shades of navy, black and white — all of them surprisingly wearable. “Women in New York want simplicity,” the designer says.

Stats: Wholesale prices range from $120 for a simple dress to $150 for a bubble kimono jumpsuit. The line will be sold at Eva and TG-170 in New York and Los Angeles’ Milk and Diavolina. It was also picked up by Harvey Nichols in Beijing and American Rag Tokyo.