Urban’s Leifsdottir Line on the Upswing

The recession prompted most brands to cut spending, lower prices and design more basic styles, but Urban Outfitters green-lighted the launch of Leifsdottir. 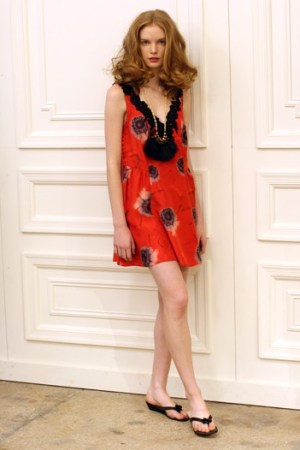 The recession prompted most brands to cut spending, lower prices and design more basic styles, but Urban Outfitters green-lighted the launch of Leifsdottir, a contemporary label that could be a $10 million wholesale operation by yearend.

The vintage-inspired, detail-oriented line made its debut the day Lehman Bros. collapsed. However, the financial crisis did not deter Urban Outfitters chief executive officer Glen Senk.

At a time when many retailers are playing it safe, the faintly romantic dresses and sportswear with hints of Old World tailoring have managed to secure a spot in the retail landscape. This spring, Leifsdottir — a traditional Scandinavian surname that translates as “daughter of Leif” and is a nod to design director Johanna Uurasjarvi’s Finnish background — will be sold in 150 doors, including Neiman Marcus, Nordstrom, Bloomingdale’s and Bergdorf Goodman, as well as freestanding Anthropologie stores. It hangs near labels such as Marc by Marc Jacobs, Diane von Furstenberg, Milly, and Elizabeth and James.

For the first time in spring, Leifsdottir will be sold outside the U.S. at Holt Renfrew in Canada and Selbu in Hong Kong. Neiman Marcus has increased its buy to 31 stores from five, even though a year ago the company deemed it too inexpensive, Senk said. Leifsdottir is also available at the new Anthropologie store in London and will be sold at a second location there to open in March.

Other potential European locales for Anthropologie stores are being scouted, with Paris at the top of the list. Leifsdottir will be sold on the Anthropologie Europe Web site when it is unveiled in March. In addition, a Leifsdottir e-tail site will go live in January. Next fall, the brand plans to introduce shoes and handbags that will be in stores at the beginning of 2011. Senk said he is considering introducing other labels to wholesale, with a launch as soon as soon as next year, but didn’t provide specifics.

Christine Chen, retail analyst for Needham & Co., said the strategy is similar to what the company did with Free People, which started with limited wholesale distribution and now has a handful of signature freestanding stores.

“What they’re trying to do is to build a brand very cautiously,” she said. “One of the reasons it has been so well received by wholesale clients is that it’s very well-priced fashion and is good quality with broad appeal.”

For Leifsdottir, Uursjarvi said her aim was to keep prices reasonable and to utilize the dressmaking qualities she first honed at school in Helsinki. Uursjarvi, the first designer hired by Anthropologie 10 years ago, likes to say she designs “everything from T-shirts to teacups and silk dresses to sofas.”

On average, Leifsdottir is three times the price of Anthropologie, with items retailing for $225 to $240. Anthropologie’s average unit price has stayed pretty much the same in recent years, Senk said. As for the recession, he said, “People didn’t go from spending 100 to zero. People went from spending 100 to 90, so we had to be smarter about getting more of that 90.”

With such unexpected touches as boning, crinoline underskirts and corset-type ties, Leifsdottir is in the same vein as “slow cooking,” Senk said.

Uursjarvi draws inspiration from her quarterly globetrotting travels or even a perfectly-written Ann Rice paragraph describing wisteria in an 18th-century scene. But she said all designs must have modern takes. So sharp is her storytelling that a print inspired by antique wallpaper is designed to look as though it has water stains. The hope is that shoppers will recognize the craftsmanship, buy the pieces as wardrobe collectibles and tell a friend. As is the case with all of Urban Outfitters brands, there is no advertising. “We have a saying internally: ‘Underpromise and overdeliver.’” Senk said. “We would rather take the money that other people spend on advertising an put it into the product or into the stores.”

Senk, Uursjarvi and Leifsdottir managing director Clare Schultheis were reluctant to disclose a targeted age range for the label other than to say it is youthful, but not young. During a recent personal appearance at Neiman Marcus in Palo Alto, Calif., a mother and daughter each bought the same coat, said Uursjarvi, who plans to make more in-store visits in the months ahead.

“People want to call Urban a teen retailer but only 10 percent of the business is generated by kids 19 and younger,” Senk said. “It’s the same thing with Anthropologie. Everyone wants to call it missy, but it’s not. It’s kind of a hybrid of what the industry would call missy and contemporary.”

After being hit by the economic downturn in the fourth-quarter of last year and seeing comp stores slide in the first quarter of 2009, company sales improved slightly, though they were still negative, in the second quarter. But this month Urban Outfitters announced third-quarter profits topped its own year-ago performance and analysts’ estimates buoyed by strong Anthropologie sales. Net income rose 5.3 percent to $63.4 million, or 36 cents a diluted share, compared with $59.3 million, or 35 cents a share, in the year-ago quarter. And net sales climbed 5.8 percent to $505.9 million from $478 million in 2008.

Unlike many retailers, the company has been hiring, and giving promotions and raises to its employees. There is no shortage of talent knocking at the door.

“When you have $652 million in cash, no debt, you run a business that’s profitable and you give people the opportunity to do things like Johanna has just done, you attract people, because they say ‘Why wouldn’t I want to be part of that?’” Senk said. “The reason growth is so important for the company is because our employees want growth for themselves.”