Vanessa Williams in a look from her new collection.

Vanessa Williams, singer, actress and author, is jumping into the fashion fray again.

She has teamed with HSN to create a women’s apparel collection that will be previewed today on the multi-platform retailer. It will be available to purchase on hsn.com on July 1, and Williams will be on-air July 11 during The List from 9 to 11 p.m., and then a full hour from 11 p.m. to midnight.

In 2016, Williams had a collection with Evine called V by Vanessa Williams, which was inspired by her personal wardrobe and style. It lasted for two years. “It was good. I loved doing it. I was the top-selling celebrity line there. I’m now on HSN, and just wanted more eyes, more opportunity, more viewership,” Williams said.

Her new eponymous collection is manufactured by Nation Design Partners, which is headed by Lynne Ronon, chief executive officer.

Rachel Ungaro, vice president, apparel buying, QVC and HSN, said, “Vanessa’s passion for her craft is evident in her countless successful endeavors from music to film to the Broadway stage and beyond. We’re eager to watch this infectious passion translate into her exclusive namesake collection of apparel.”

Williams said the buzzwords that come to mind when describing her aesthetic are “elegant, stylish, relaxed, but comfortable.”

For example, she spoke about some of the looks that were popular in the Nineties, but proportions have changed. “I always would rock a silk cami with lace,” Williams said. “We’re introducing silk camis with bits of lace on the top or bottom. Some are A-line and some are straight down.

“It’s basically building a closet. So you’ll always be able to throw some separates on that look fantastic, but make you feel sophisticated. I’m 56 and my body keeps changing every year. Sometimes I can’t get my arms back into something that I’ve worn for 20 years, and I’m like, ‘What has happened?’”

Williams will offer eight styles in her first delivery. One of her favorite looks is the bomber jacket that has zippers in the front, with two layers of sequins. “You’ve got the hardware and the sequin flaps make them special. I try to add some type of print, metallic and hardware,” she said. She likes the jacket paired with a black-and-white zebra skirt and black camisole. “It’s definitely a luxe feel,” she said. 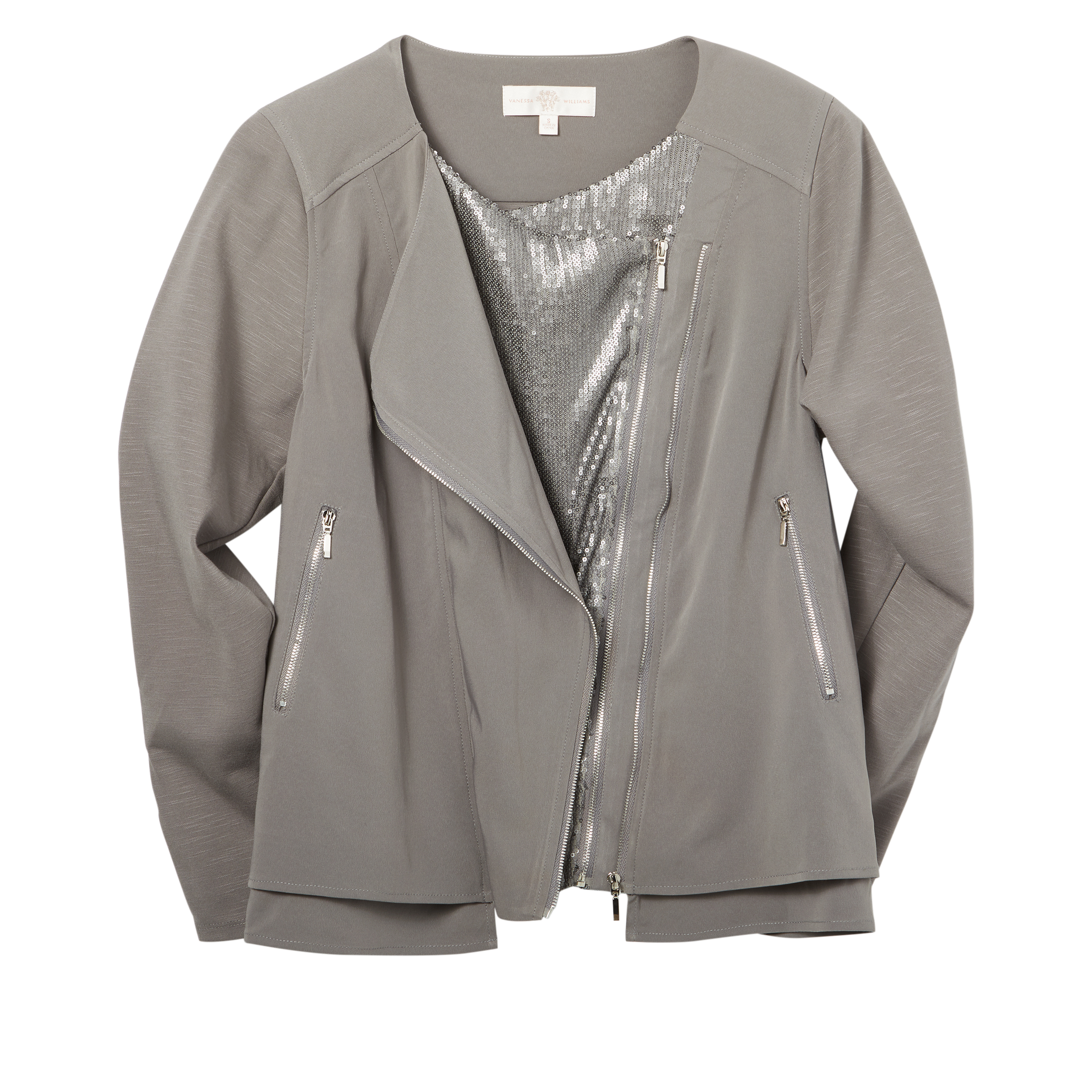 A look from Vanessa Williams’s line for HSN.  courtesy photo

Williams’ collection retails from $40 for tops to $200 for jackets. The size range is XS to 3X.

Williams, who lives in New York, said she immersed herself in the design process and would go to Design Nation once a month to go over shapes, ideas and fabrics.

“I’m very engaged. When we’re in meetings, when I’m on my knees, saying this hem needs to come up, or this needs to be slimmed down, or take a half inch out of here. People know that I know what I’m talking about which is fantastic. I grew up with a sewing machine in my mom’s room. My mom sewed a lot of my clothes.

“We used to make our clothes all the time. And we’d go to the stores and get our Butterick pattern, or McCalls. The fabrics store was fun. We’d go to the trimmings store. We’d have patches and embroideries. That’s what we used to do in the Sixties and Seventies,” she said.

Fast forward to 2006-10, and Williams said she learned a lot working with Patricia Field, who was the costume designer for “Ugly Betty,” where Williams played Wilhelmina Slater. “It was one of my favorite times in terms of tailoring, knowing my body, being able to learn what fits everyone was fantastic,” she said.

Fit is really important to Williams. She’s a fan of shoulder pads, “which really square off and make everything beautifully tailored and drapes much better,” she said. She’ll add removable shoulder pads in most of the things, if people want the option.

She said the summer offering is small, because they want to make sure it launches well. They will add many more styles in September. 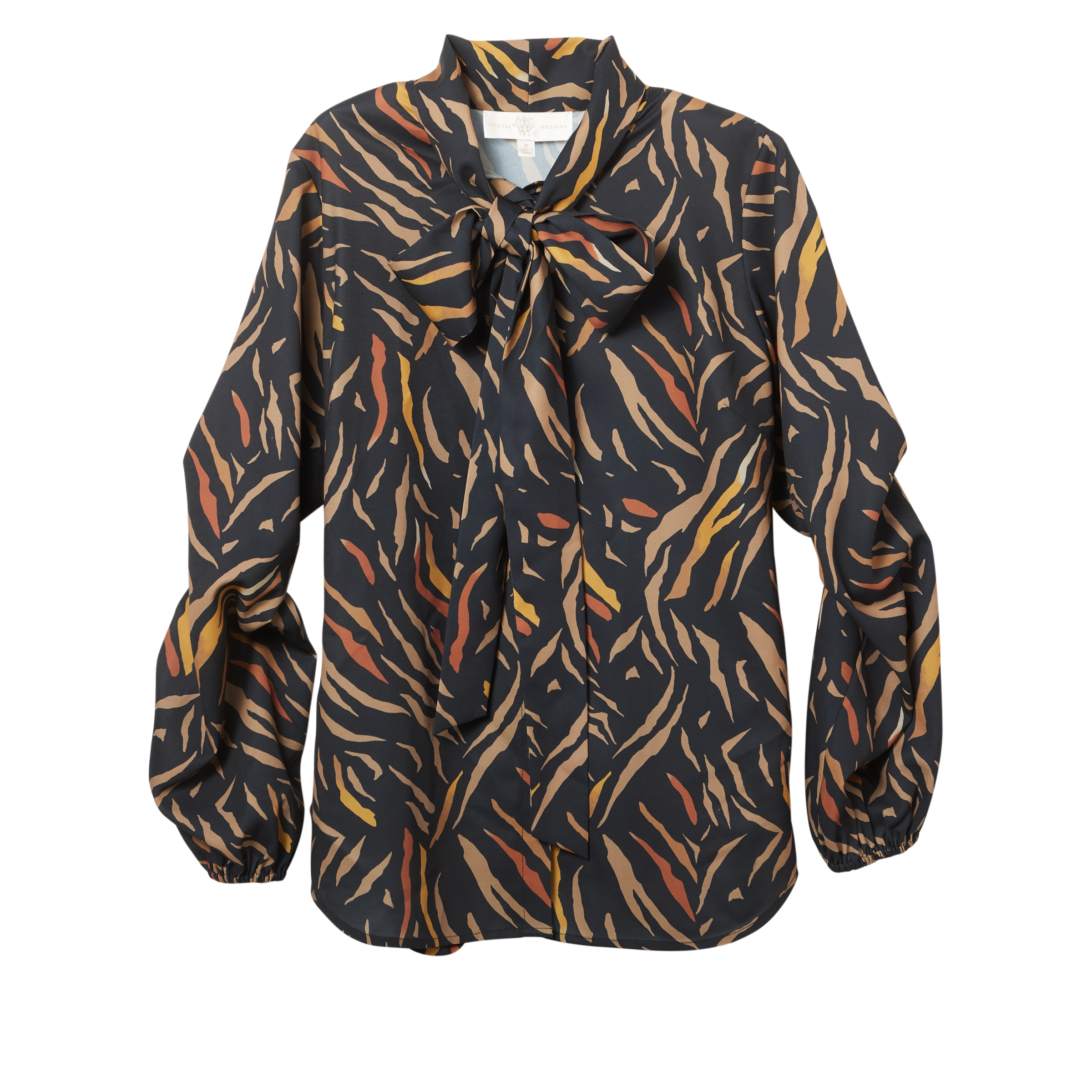 A blouse in the September offering of Vanessa Williams’ line for HSN.  courtesy shot

She plans a July show and a September show, for now.

As for her personal style, Williams said,  “I have a lot of retro stuff. I used to be able to fit into a lot of my stuff from the Nineties. My body is changing. A lot of the things I used to be able to throw on, I can’t. I haven’t been spending money on major clothes recently.” Her summertime uniform is white jeans, a pair of sandals, some good gold jewelry and a crisp linen shirt. “Calypso has good stuff if I’m going somewhere. A heel if I’m feeling sexy,” she said. If not, it’s a flat, she said.

She’s not planning accessories just yet. “I’m sure we’ll get to it,” she said. The collection is produced in New York and Asia.

Williams said she was inspired by her travels and what she’s drawn toward. Raul Penaranda is her prints designer. “If I say I need an Asian print, or an Asian floral, or I want black background with some tropical leaves, he comes up with cool stuff,” she said. For spring, the collection will be heavily print and graphics oriented.

As for entertainment projects in which she’s involved, Williams said she’s writing a children’s book, with a recording component, she’s got a new album with BMG, and she’s developing a few scripts. “Between lawyers and agreements, it’s all in motion,” she said.