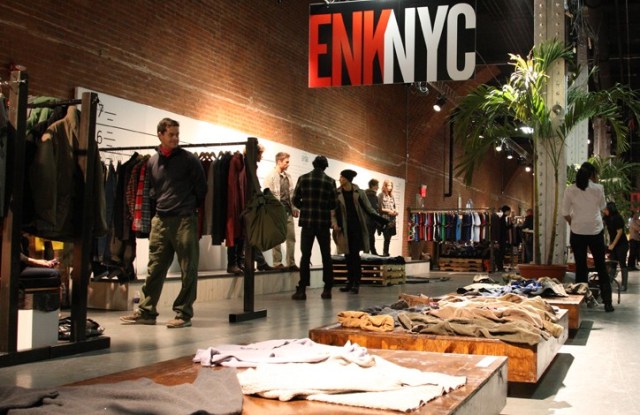 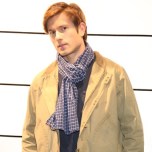 The recession seemed to have eased its grip at the revamped and relocated ENK NYC, where vendors cheered the steady flow of “quality” retailers and a growing consensus that the apparel business had begun to improve.

“We’ve seen retailers we haven’t seen in the market for a few seasons,” said Greg Lawrance, co-founder of Number:Lab, which showed winning athletic-inspired pieces such as a reversible wool pull-over and tailored jersey drawstring pants. “Price is still their first question, but people seem to have more faith in the future.”

Ted Baker seems to share that faith. It’s doubled down on the U.S. market, where it has been absent for the past two seasons after its master license holder, Hartmarx Corp., filed bankruptcy last summer. Now under corporate control in London, the brand is relaunching next fall with a broad assortment of sportswear and accessories. More known in the U.S. for tailored clothing, the brand emphasized its casual offering, which included playful knits and denim-friendly wovens. “Without the intermediary of a licensee, we’ve also cut prices 25 percent,” said Patrick Heitkam, executive vice president of wholesale and licensing for Ted Baker USA.

Evisu also came to ENK to showcase its new identity, crafted by new owner Scott Morrison. The Earnest Sewn co-founder unveiled an Evisu that has traded its streetwear vibe for contemporary sportswear cool. The line, rife with layered workwear looks and reimagined “mensy” classics, was shown alongside Evisu Genes, a range of younger, more advanced sportswear.

Call it “vintage” or “heritage,” but old-time looks continue to saturate the contemporary sportswear market, where blue-collar chic has influenced nearly every vendor — some more literally than others. DS Dundee, a line of updated English countryside jackets and knits, made its U.S. debut at ENK NYC with thick wool shooting jackets, melton shawl collar coats and Fair Isle knits. Recut for today’s citified squires, the line was an apt symbol of the nostalgia running through men’s wear at the moment and a reminder that the familiar can serve as fashion — especially in challenging times.

The recession continued to define business at ENK in other ways, too. Sanyo, a large outerwear maker in Japan, said the majority of its business in the U.S. stems from in-stock programs as retailers have shunned seasonal goods. A Sanyo representative said 80 percent of its sales were from in-stock goods, compared with 50 percent two years ago.