The winner of seven Grand Slam singles tournaments was in New York on Monday to show off her new EleVen by Venus Williams tennis line. 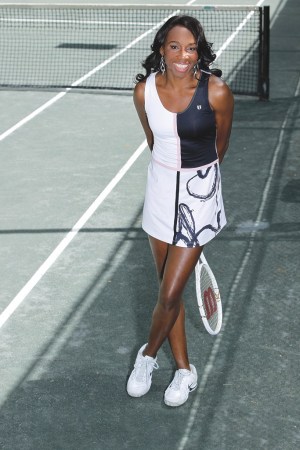 As every tennis player in Manhattan knows, it’s not easy getting court time in the city. But fortunately if you’re named Venus Williams, that doesn’t seem to be a problem.

Williams, the winner of seven Grand Slam singles tournaments, held center court Monday at the Town Tennis Club on East 56th Street, where she hit tennis balls with eager press members who wanted to try out their “weekend warrior” forehands and backhands on her. Williams, 31, couldn’t have been more gracious. Dressed in her new EleVen by Venus Williams tennis dress, she was poised, friendly and even took it easy on a reporter who likes to think she has pretty good strokes. Even though she was no match for Williams, she did let her win a point.

Williams was in New York to launch her new tenniswear collection. Coming straight from a practice herself, she had to borrow silver dangling earrings from her sister Isha to get ready for the press event. Williams is working with a manufacturing partner, Ugo Capasso, and is producing the collection in Los Angeles.

“She’s fully involved in the design, which makes it easy for us,” said Capasso, who has already begun selling to country clubs and has received reorders. This week, they shipped to the Tennis Warehouse, a large online tennis retailer. EleVen will offer three small capsules this year, and next spring, the line will be three times the size, said Capasso. Distribution will be expanded to department and specialty stores and more pro shops.

Known for her fashion sense on and off the court, Williams is serious about developing an active sportswear business. This is her second attempt to develop a collection. In 2007, she founded EleVen exclusively for Steve & Barry’s, the apparel chain that went into liquidation in 2008. She went on to do a partnership with Ralph Lauren and designed some tennis pieces for Gilt Groupe.

She said the relaunched EleVen collection isn’t inspired by the latest trends, but rather comes from deep within herself. “It was inspired by inside of me. For me, it’s about how do I see it, as opposed to what’s the latest design. If something is a good design, people will relate to it,” said Williams, who has an associate degree in fashion design from the Art Institute of Fort Lauderdale.

Williams explained that when a consumer gets dressed in ready-to-wear, she gets to choose the designer, fabric and style she wants to wear. But in sports apparel, she is not able to do that. A consumer has to wear whatever that sport requires. “EleVen allows you to be fashionable or less fashionable. Your personality comes out,” she said.

Williams, at 6 feet 1 inch, has always had a philosophy, “Look good, play well,” and she said if you don’t look good on the court, your game is going to be affected.

Throughout her tennis career, Williams has experimented with different looks on the court, to varying degrees of success. “I was wearing lace and fringe and experimented with how far I could go on the tennis court and still play without thinking about what I was wearing. Those experiments are over,” she said.

For her own line — which features strong, simple and classic designs — she brings her love of art and watercolor and even incorporates some of her original prints, including one called the “Oh and Oh” design, a play on tennis scores. Some of the styles have secret, handwritten messages from Williams such as “Bring It,” and “Oh and Oh, Beat ’Em,” which are hidden in each piece of the collection.

Williams recalled when she started designing the dresses, she had to sketch 12 dresses before one was OK. But for the “Oh and Oh” tournament dress, she did only one sketch. She loved it and ran it by her 30-year-old sister Serena. “I asked her, ‘Do you like this?’ She loved it and wanted to know when it was coming out. She’s my muse,” said Williams.

Recently, she wore the “Oh and Oh” abstract top to a charity dinner with heels and jeans. “You can mix and match them. You can work out in some of them,” she said. She plans to expand to a lifestyle line in 2013. “Right now it’s just a sneak peak of it all. It’s my mind and my philosophy coming out in clothes,” she said. “This is just the beginning. It’s important to have calculated growth. You have to be strategic.”

EleVen includes a tournament dress, classic flutter skirts, tanks and sports bras in polyester and spandex jersey, as well as graphic V-necked T-shirts in 100 percent cotton jersey. For men, there are fashion polos, V-necks and crewnecks in nylon and spandex, as well as 100 percent cotton. The line, which wholesales from $17 to $48, features graphic prints, abstract prints and rose-gold metal accents. While she doesn’t have a footwear line yet, she said someday she would like to design sneakers under the EleVen label. “That would be awesome. Now I wear whatever matches the outfit,” she said.

Williams, who’s also a spokeswoman for Jamba Juice and Wilson Sporting Goods, said it’s a challenge to juggle her tennis and fashion careers, but she’s as ambitious about her tennis game as she has always been.

“I definitely love tennis. I just got back on the tour. It was a blast and a roller coaster. It was awesome,” she said.

After being sidelined for six months with Sjögren’s syndrome, an autoimmune disease, Williams had to withdraw from the U.S. Open and the Australian Open. She started playing again in March at the Sony Ericsson Open tennis tournament in Miami, where she reached the quarterfinals. The illness limited her to 11 matches in 2011 and she finished outside the Top 100 for the first time in 15 years. She is ranked No. 70.

Williams said she has her illness under control, has committed to a vegan diet and is playing well again. “I feel like my game, especially in the last few days, is starting to feel like it should feel,” she said.

Asked how she’s able to balance both a tennis and fashion career, she replied, “It’s not easy. I’ve got a good partner. I’m someone who likes to do everything. I had to follow up on everything. I realize there are capable people around me who are very good as well, and you have to trust them. I just got to that point about three weeks ago. My life is so much better now. I’m starting to have a life.”

She said she intends to get the word out about the new collection “by winning matches.” She also gave a shout-out to her fans, who were asking for a collection and also wanted her to return to the tour. She’s in constant contact with them via Twitter, Facebook and “face to face.”

Does she envision some of her tennis friends wearing the collection on tour? “I’d like to get some of the younger players to wear it. I’ll be the kind of person that it wouldn’t just be about the clothes. I’d probably say, ‘Here are your outfits for these two tournaments. Also here are the earrings and the necklace. Please wear it with this hair band,’” she grinned.

Williams said she’ll match her earrings to her tennis outfits on the court. “Accessorize, accessorize, accessorize.” That is her mantra. “In practices I’ll wear my hair down,” said Williams, who was wearing her hair down during the interview and tennis rally. But when she gets down to business in a real match, “I’ll wear it up a little more. It’s roll-up-your-sleeves time.”

Williams said she’d love to design earrings, but she’s got to pace herself. “One step at a time,” she said. “And I definitely want to play tennis. I want to get to the top again, absolutely.”

• Mix in all white every now and again. You never want to forget the roots of the game.

• Wear something you feel confident in. You want to walk out there feeling like you’re going to win the match. Wear something that accentuates you and works for you.

• Don’t be afraid to mix in some shorts or even capris, even if no one else is doing it.

• Don’t forget accessories. Even if you’re playing sports, you can wear a cute visor, a stud earring or a cute wrist band.

• Regardless of all the other rules, dress to win.