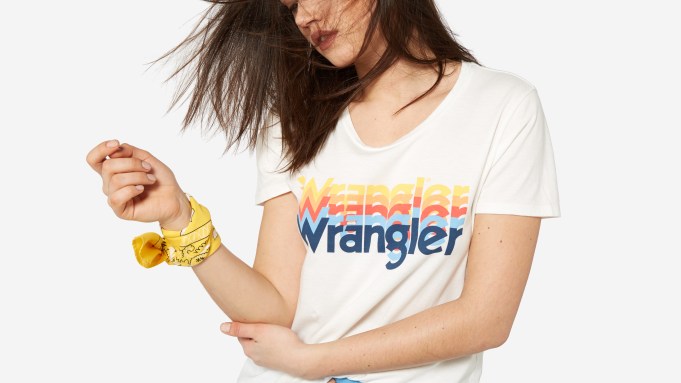 The story begins in 1947 when Rodeo Ben, a celebrity tailor, created an authentic Western jean for professional cowboys. The brand name was Wrangler.

Fast-forward 70 years and the company is celebrating the milestone with a number of initiatives, including a special anniversary collection, a collaboration with famed psychedelic artist Peter Max, a special logo and a block party in its hometown of Greensboro, N.C., this fall.

But instead of focusing on its Western wear offering — a category that remains a mainstay for Wrangler — the company decided to zero in on the colorful, fashionable looks offered in the Seventies for the anniversary celebration.

“We have seven decades of history and Wrangler has gone through a lot of different life stages,” said Craig Errington, vice president of marketing for the VF Corp.-owned label. “As we went back into our archives, we were most drawn to the interesting product from the Seventies.”

Errington said the brand’s European division designed a collection intended to speak to today’s retro fashion trend, using the colors, graphics and styling from the original collection, but updated for today.

“We’ve stayed true to the design, patches, embellishments — even the rainbow logo from 1972 — but reinterpreted with a fresh face,” he said. “The fits have been modernized, but the aesthetic remains true to the originals.”

The throwback collection includes brightly colored pants and product details popular in the Seventies, such as rips and repairs on slim-fit jeans and Western-inspired button-down shirts for men, and high-rise cropped zip skinny jeans for women, classic ringer Ts and worn-in denim jackets.

The line has launched in select retailers in Europe, he said, and the North American introduction will be on May 8. The collection will be sold within Wrangler’s two flagships in Dallas and Denver, as well as on its web site.

Errington said since being introduced overseas, the line has had “a very positive response. It’s selling well and there’s a real brand buzz on social media. So we’re excited to get it going in the U.S.”

Additionally, this special capsule is allowing Wrangler to expand distribution beyond its historic mass-market roots into a higher-priced arena. For the first time, select pieces will be offered at Macy’s and PacSun stores, which Errington said will be an “interesting and fresh story” for the brand and these retailers.

He stressed that mass-market distribution as well as Western wear continue to be “an important part” of the Wrangler business, but the anniversary collection will be at a more premium price point. Overall, the more-fashion forward offering accounts for around 20 percent of the total mix and is geared to a younger customer.

In September, Wrangler will launch a collaboration with Peter Max, who actually designed a line for the brand in the early Seventies. The collection will feature bold colors and all the packaging — from the artwork on the jean back-pocket tag to the sewn-in shirt label bearing the Peter Max logo — will be an exact replica of the originals.

The Peter Max product will be sold only in the Wrangler flagships and online in the U.S. as well as in Europe and Asia, Errington said.

With both these lines, Wrangler is “opening the doors to more consumers,” he added, noting that the company will support the initiatives with a full marketing campaign that includes social media, bloggers and in-store events.

Also in September, Wrangler will be featured during the weeklong Jeansboro celebration in its hometown of Greensboro. This annual tribute to the region’s textile heritage will include a special Wrangler birthday party and fashion show. There will also be special shopping experiences in the flagships.

Errington said as Wrangler looks to its next 70 years, the brand is working closer than ever with the VF teams in Europe and Asia, particularly on product development.

In the first quarter, global revenue for the brand was down 9 percent overall, with low double-digit growth in direct-to-consumer and a low double-digit decline in wholesale. In the Americas, Wrangler posted a low-teen revenue decline in the U.S. but a high-teen growth overseas.

Although there are no plans to add more stores in the U.S., Errington said the e-commerce business is a big focus for the brand, as is the anniversary celebration.