The designer is launching Zac Zac Posen, a new line that's meant to compete with the likes of M Missoni, Red Valentino and Tory Burch. 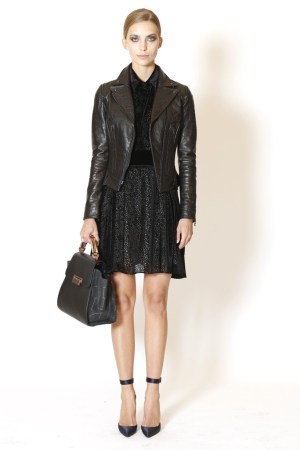 “Advanced contemporary” and “upper contemporary” are part of the industry terminology bandied about for clothes priced around $500. The category has emerged as the hot market that everyone wants in on, including Zac Posen, who’s bringing Zac Zac Posen to the table. During a preview last week, Posen’s president, Jillian Sinel, classified the collection as “contemporary luxury or maybe gold range,” adding that it’s meant to compete with M Missoni, Red Valentino and Tory Burch, which have historically been grouped under the dusty department store parlance “bridge.” Whatever retail folk are calling it, “most importantly, the name is easy,” said Posen.

Three years ago, the designer introduced the quirkily titled lower-priced collection Z Spoke, a play on the word “bespoke,” in a much-hyped retail exclusive with Saks Fifth Avenue. Conceived as a young and affordable accompaniment to Posen’s romantic, often dramatic designer line, Z Spoke seemed to encounter a bumpy road: Saks eventually dropped it, and it’s now in limited distribution at Hudson’s Bay and Lord & Taylor. Working on Z Spoke, where prices are under $200 and which makes up about 20 percent of Posen’s business, is what got him thinking about Zac Zac Posen. “In building into such strict price requirements for Z Spoke, we started to learn that with a slightly higher price point, you can get a lot more out of the product,” said Posen. “You can get a level of fabric quality that’s a lot nicer, and it enables it to expand into evening.” Posen is a celebrity red-carpet favorite, and his gowns feature prominently on his designer runway.

The idea of a true contemporary collection came up a year ago, while Posen and Sinel were on a plane to a designer trunk show in Las Vegas. Recognizing contemporary as “the golden price point,” as Posen called it, he was not interested in doing the edgy denim- and jersey-driven stuff that has flooded the market. He should know — Posen shares his ceo, Susan Davidson, with Scoop NYC.

“We did a lot of soul-searching,” said Sinel, who would bring Posen merch from the contemporary market — bestsellers from Scoop, for example — to see if any of it would inspire him. “I thought, ‘Why do I have to make you this?’” said Posen. “Me combining a leather patch on a heathered gray jersey is great, but it’s not the most natural thing for me to offer. And for something to be successful it has to be honest and natural.” They weighed in with their retailers, too, and found that what stores want from Posen is “a dressed-up look,” said Sinel. “It has to be a put-together outfit. You can’t just throw a shirt and a pair of pants together and hope it sticks. It also can’t be the same as everybody else.”

It stands to note that a black leather motorcycle jacket and leather pants found their way into the Zac Zac Posen fall offering, but the majority of the collection was built around Posen’s signature stretch jersey dresses with architectural seaming, printed blouses and matching skirts, stretch faille jackets and pants and three-piece suits in jacquard with a shot of metallic thread. There are also handbags done in a license with Mondani, as well as a major evening and cocktail dress component.

Posen and Sinel see major potential for eveningwear priced between $690 for cocktail and $1,690 for gowns; styles include a floor-length sequined leopard-print gown and a mint-green satin number with a jewel-embellished neckline. Every gown will be available in every color, “like Garanimals,” said Posen. He previewed the collection to retailers for pre-fall and has confirmed Neiman Marcus, Saks, Intermix, Scoop and Harvey Nichols.

Another reason Posen feels the time is right for Zac Zac Posen is his role on “Project Runway.” For those who might have lost track of the show, Posen has replaced Michael Kors in the role of quippy designer that he occupied for 10 seasons. Episodes featuring Posen started airing Thursdays at 9 p.m. last month on Lifetime. “We’re entering a moment when we’re on TV on a weekly basis,” said Posen, going back to the simplicity of titling the collection. “It’s important to give the customers who want it in the store that clear name.”