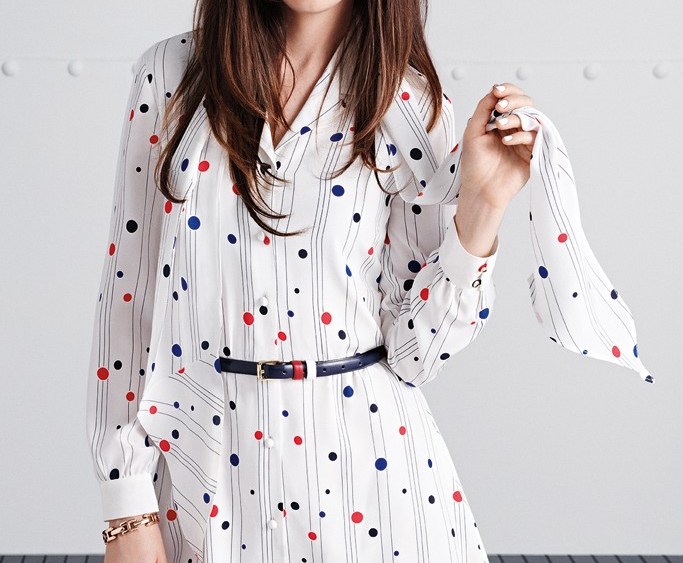 To Tommy, From Zooey.

It sounds a bit like a love note, but is in fact something different altogether — the name of a new capsule collection designed by Tommy Hilfiger and Zooey Deschanel, the doe-eyed actress, musician and star of the hit TV show “New Girl.” The collection, which will mainly consist of flirty dresses, will make its debut at Macy’s this spring.

Hilfiger met Deschanel some time ago at a mutual friend’s house in Santa Monica, Calif. “She was wearing this vintage jumpsuit,” the designer recalled. “I complimented her on it, and she told me how she loved vintage. Somehow, the conversation went from loving vintage to possibly doing a capsule collection with her.”

Fast-forward, and about a year or so ago, the two joined forces to start working on design ideas; their close collaboration, as Hilfiger put it, focused on “what she likes and what she doesn’t like, the kind of fabrics and what kind of colors. We really see eye to eye on a lot of what she loves.”

The resulting capsule — made up of 16 dresses — is strongly informed by Deschanel and her quirky, endearing persona.

“They are Sixties-inspired short dresses,” Hilfiger noted. “There is a lot of red, white and blue, but done in a Zooey way with interesting detail and flirty fabrics. They are very Jean Shrimpton and Twiggy — really from the Sixties in London. That’s not something we would normally put in our regular sportswear line — maybe we’d be inspired by the Sixties for the runway, but it’s a new way to look at fun, American classics.”

Those include several shirtdresses, for example, as well as peekaboo numbers featuring prints inside pleats. Piqué and oxford cloth, as well as silks and linens, are among the fabrics. The overall aesthetic merges Mod with nautical, or “Modical” as Deschanel, who named each dress after a friend, described it.

“I am a fashion fanatic, and I am always looking for new ways to incorporate vintage, feminine pieces into my own wardrobe,” she said. “Tommy and I share many of the same inspirations — old-school music, classic films and old Hollywood icons — and his guidance during the design process helped to put a really unique twist on each piece.”

As for Hilfiger, he was full of praise for the muse, whom he dressed in a preppy seersucker gown for last year’s punk-themed Costume Institute Benefit.

“She reminds me of Audrey Hepburn for her sense of humor, her sophistication,” he said. “She is very bright and very funny, and really down to earth, the girl next door. At the same time, she has a Jackie O type of chicness to her.”

That mix plays nicely into the designer’s ethos. “We always try to ascertain whether or not someone is a ‘Tommy girl,’” he said. “She is the epitome of it — all-American, youthful, fun and funny, yet she has a sophistication and worldliness to her that’s quite endearing. She is easy to get along with and she is quite involved. She really knows what she likes and what she doesn’t like.”

According to Martine Reardon, Macy’s chief marketing officer, “The To Tommy, From Zooey spring capsule collection will be a centerpiece of Macy’s ‘American Icons’ campaign and will give our customer fresh, fun and feminine fashion to take her into the cheerful mood of summer.”

The actress will appear in the advertising campaign that accompanies the launch, which was photographed by Carter Smith and will be placed in print publications, digital outlets and outdoor placements.

If a retail hit, could there be a sequel to the collaboration? “We enjoy working with each other so far, so who knows what might be in store for the future,” is all Hilfiger would say.