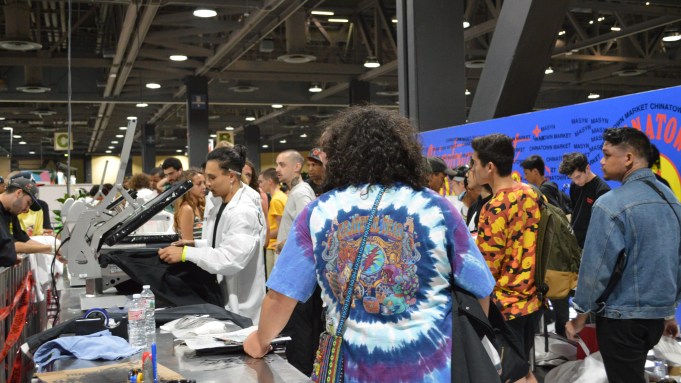 The idea of lifting the curtain on the business-to-business trade show for consumers continues to gain steam, with Agenda on Saturday capping its traditional trade show with a consumer-facing festival. It was the big buzz locally, especially with Agenda once again running in conjunction with the Dew Tour skateboarding competition at the Long Beach Convention Center compound.

The festival included performances on Saturday from Brockhampton, Lil Yachty and Na-Kel Smith, among others. There were also more than 500 pop-ups from brands such as Chinatown Market, The Hundreds, Pintrill, Herschel Supply Co., Ripndip, Champion and Dr. Martens. Panels featured skateboarders such as Pat Ngoho and Steve Caballero, actors from the Netflix series “Game Over, Man!” and a talk on reselling with StockX chief executive officer Josh Luber. Athlete, musician and designer meet-and-greets, plus a bevy of food trucks, filled out the day.

It was a proposition consumers were willing to pay for, with festival tickets costing $60. VIP tickets, promising perks such as prime spots for shows and limited-edition product, cost $95 and sold out ahead of Saturday.

“It was sick,” Orange, Calif., resident Zamar Velez said of last year’s Agenda Festival, which brought him back this year.

Velez, while standing in line to get through security Saturday morning, said he came to see Spaghetti Boys and the Chinatown Market booth, which commanded long lines throughout the day for custom screen printing.

Most of Velez’s peers echoed similar sentiments for why they came, which was largely for the music.

Dylan Stabler and Raelyn Mason drove the roughly two hours from San Diego to Long Beach to see Brockhampton and Billie Eilish. In the early afternoon, the two stood in a line for the Brockhampton merchandise booth, and said they intended to watch the skateboarding at the adjacent Dew Tour and perhaps do some shopping, although Stabler said, “I usually look online to see if I can find something cheaper or better,” of where he typically makes his purchases.

Rigo Maldonado who, along with two friends, drove six hours from the Central Valley to get to Agenda Festival, also said he does most of his shopping online, with his go-to brand being Adidas. The trio by the early morning had managed to nab their Brockhampton merchandise — $30 for a long-sleeved T-shirt — as they agreed much of the rest of the day would be about eating in the food truck court.

“Hopefully, this is the new generation of trade shows, opening it up to the public and the community around you, because you want to put your stuff out there to all these people,” said Freddie Rojas, owner of Los Angeles-based brand Rojas. “Trade shows are having a hard time. I feel this is an evolution.”

“It’s great,” said Chris Hollosy, founder of Burbank-based T-shirt brand Omerta. “There’s music, elements of the street and that’s what you see with these kids nowadays on the street, with their headphones on and carrying their skateboards.”

Omerta, which makes clothing for men, women and children, exceeded expectations for the Agenda trade show and festival, Hollosy reported by the end of day Saturday.

Others such as Phoenix-based Lettercraft, which makes pins, magnets and other gifts, reported slower-than-expected traffic across the three days. Owner Brandon Young said the upside was the trade show component served as a good way to make connections with other vendors.

“Being fairly new to the trade-show piece, and with the industry in such a transitional phase, I didn’t set any real expectations,” said Agenda Show and ComplexCon show director Neil Wright. “I was mostly looking to speak to as many brands and retailers and find out what value they get out of Agenda. With that, we found that there are a lot of brands and retailers who are doing significant business at the show, which is very reassuring.”

Wright went on to say the festival component met his expectations around the experience created for attendees. While there is still work to do on the festival, he said, there’s plenty of opportunity.

“I think the festival has so much potential to grow,” Wright said. “The more we discuss internally, the more we continue to see these bigger opportunities. I’m not sure if it will be bigger than the trade show anytime soon, but I believe it has the potential to be.”

The Thursday and Friday Agenda trade-show component in the lead-up to the festival marked the first in its flagship Long Beach location since founder Aaron Levant stepped away from the business in June amid what he told WWD last year is a “right-sizing” of the fashion trade-show model.

“Absolutely there’s a need for [trade shows], but I think it looks and smells different from what it is today,” Levant said at the time, citing consolidation of shows such as Outdoor Retailer and SIA, and even Agenda with the cessation of its New York show last year.

However, the pairing of Agenda and Dew Tour is a reflection of the adage “the more things change, the more they stay the same.” Digital brands once thought to be taking the lunch of brick-and-mortar are now getting into physical retail. And experiential activations, such as ComplexCon, which are focused on the consumer, are dabbling with a wholesale component for the trade as organizers look to keep in lock step with where the most action can be had.

Murthy, whose business operates a number of digital men’s brands, was quoting something a sales rep once told him as he recalled past Agendas when the LRG Clothing Co. booth would have dozens of people milling outside of it during the trade show.

“I don’t know if they were buyers or friends, but it worked,” he said of those crowds. “You just need bodies to create energy. That energy will turn into dollars.”

Chris Ngo, coowner of The Leverage Showroom, which works with lines such as Big Baller Brand, said it more bluntly during that same podcast taping.

“The traffic’s slow,” he said. “Trade shows [in the past], you’d have people walking around with tigers, lions and bears. Girls walking around body painted….You know how easy it is to find stores on social media? It’s easy as s–t. There’s no need to do trade shows to find retailers.”

He later went on to liken the buzz and excitement around the recently ended Paris Men’s Fashion Week to “the old days of [WWD]MAGIC.”

The idea, the podcast panelists went on to discuss, is that the European luxury brands have become much faster at getting in on the magic that’s happening within the streetwear space and acting quickly to cut strategic business deals in the process.

“It’s crazy to me even to this day that there’s a [Louis Vuitton] hoodie in our store that retails for $7,000,” said Michael “Miki” Guerra, founder of streetwear retailer and reseller Magnolia Park. “We’ve sold seven in the last three months….It’s crazy to see these two worlds coming together….For us, it’s changing the game.”

Ngo brought up LVMH Luxury Ventures’ backing of Stadium Goods earlier this year on undisclosed terms and predicted Jerry Lorenzo and his label Fear of God would be next to come into view by a conglomerate such as LVMH or Kering.

Murthy was in Paris, not to see the collections but with family, and noted the same energy and on-point focus on streetwear driving the success stories of front-running bands today.

“We were walking the streets. We were hitting all the luxury stores. It was so damn busy,” he said. “What I realized was that luxury brands are way more progressive — European luxury brands — than American brands. Virgil’s [Abloh] an American designer. Why the f–k didn’t the Gap pick him up?”

Designers are the new rock stars, the group pointed out, because of the communities they’ve cultivated on social media. A point struggling brands may want to study.

Murthy’s taken that reality head-on and said he’s in the early stages of cultivating his own following on social media.

“It is so powerful because the people you actually connect with that actually listen and actually talk to you, it converts to sales,” Murthy said. “Today the customer has choice. They can connect to whomever they want.”