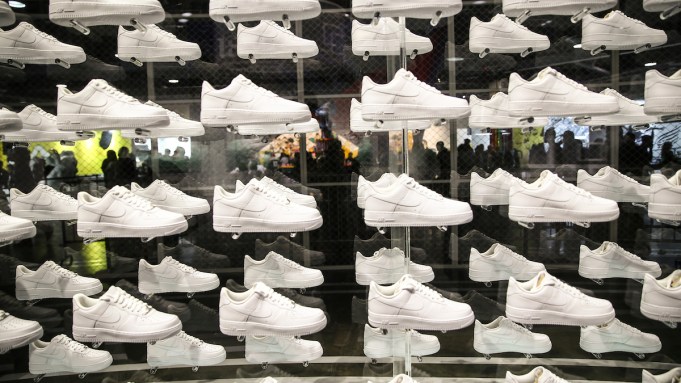 ComplexCon, now having wrapped its second year, has gleaned quite a bit of hype around the non-stop drops. Brands used the two-day event as a platform to debut collections and collaborations, while others released exclusives. Below, a roundup of some of the most talked-about releases.

Backstory: Sean Wotherspoon, of vintage retailer Round Two, combed the Guess Jeans USA archives for his collaboration with the denim company. What resulted was a nod back to the company’s heritage as seen in crew neck shirts featuring the company’s well-known stripes.

Inspiration: This should come as no surprise given the lines, but Adidas’ EQT and NMD sneaker styles — exclusives to ComplexCon — sold out over the weekend. Other fast movers at the brand’s booth included collaborations with N.E.R.D. and Bape.

Inspiration: Nike continued its celebration of the Air Force 1’s 35th anniversary, selling its AF-100 collection at ComplexCon. The Air Force 1 ’07 Off-White was available only during the weekend festival, with additional collaborations with Roc-A-Fella, Just Don, Travis Scott and Acronym set for national release over the coming weeks.

Inspiration: The sci-fi classic got a new spin with a Bait collaboration. The jackets, T-shirts, sweatshirts and hats from the collection debuted at ComplexCon.

Inspiration: PacSun offset space at its booth specifically for Fear of God product exclusive to ComplexCon. Fans lined up early both days for the collection of T-shirts, duffel bags, bombers, backpacks and shoes.

Inspiration: ComplexCon’s own gift shop garnered its consistent lines throughout both days with fans looking to get their hands on show merchandise. Many could be seen leaving the convention center sporting the Takashi Murakami-designed flower tote bag. Other top sellers included the Dobtopus deck set and Mr. Dob toys.

Inspiration: Ian Connor’s update on a pair of classic Vans surfaced earlier this year with the reinvented silhouette with a lightning bolt replacing the traditional wave pattern. If the resell market is any sort of barometer, a pair of the sneakers were on eBay Tuesday with a “Buy it Now” price of $550.