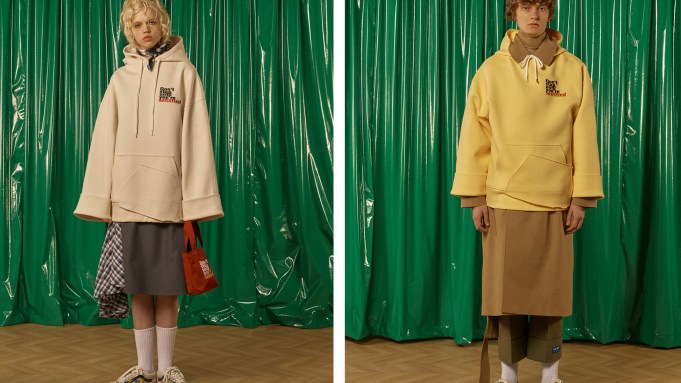 Seoul is a city on the forefront of technology and beauty, yet it has spawned few global luxury fashion labels.

There are some beginning to attract notice, one of which is Ader Error, a youth-culture driven brand that has grown an international following by forging its own marketing, retail and styling path. Even without significant distribution outside its native country, the brand has managed to amass in excess of 425,000 Instagram followers over four accounts with its “content-driven” approach to fashion design and execution.

More interesting than the metrics is how the brand has challenged South Korea’s hard-lined understanding of gender roles. All of Ader Error’s collections are unisex, and while often styled on female models, it is nearly equally purchased by men. Just three years old, the brand has grown 200 percent annually since its founding.

Ader is the work of an anonymous “crew” — a band of 20 or so employees from varying disciplines including interior design, fashion, architecture and finance. The entire staff is a subculture in itself — crowd-surveyed for opinions and ideas regarding all facets of the brand. These findings are then spun in the label’s Hannam-dong studio like a creative centrifuge — churning out an urban aesthetic that is simultaneously austere and helter-skelter.

The brand’s eccentric yet approachable designs have created buzz, emboldening its crew to begin wholesale distribution for the spring 2018 season, with a pop-up strategy it will unveil today at 10 Corso Como.

In May it also launched a new lifestyle brand of home objects and beauty items, Day After Day — DAD for short — that it projects will outpace sales of the Ader Error apparel line, with  items such as candles, slippers and organic toiletries.

The label releases two main collections a year, with all apparel produced in South Korea, typically priced from $40 to $300. Ader purposefully limits each collection’s production to spur desire among its clientele. The label said more than 90 percent of each collection sells out.

More than 70 percent of the brand’s consumer base is under the age of 35, with 40 percent of its customers in Asia, another 40 percent spread across Europe and the remaining 20 percent in the U.S.

Ader Error was set up in 2014 by four anonymous cofounders. One of these individuals, who requested that his name not be published, met with WWD on the roof of Café Onion — a metal factory turned bobo hot spot in the developing neighborhood of Seongsu-dong. There, in what’s being referred to as “Seoul’s Brooklyn,” a skyline of converted shoe factories, warehouses and raised train tracks has become the backdrop for artist lofts, coffee houses and boutiques.

This individual said of Ader Error’s ideology: “The main reason why we started this brand was that we enjoying making content — it could be images, clothing, videos, but the first category was fashion. We started with T-shirts, sweatshirt, hoodies. We started with the easy things because our brand slogan is ‘But near missed things.’ This means we want to find our content and inspiration near our closest things.”

The label expanded its offering in 2015 to include more tailored items — overcoats, trousers and shirting. Each season builds upon the last, with esoteric themes projected onto its signature oversize T-shirts, turtlenecks, broad-shouldered coats and slim track pants at the whim of the Ader Error crew.

“There is no one concept, we are a crew so if we have to make a new concept we collect the opinions of our whole crew, we create idea boards and we summarize that into a concrete idea,” the cofounder said.

“For us, clothing and fashion are a means for communication with other people. Our brand is based on simplicity, which has minimalistic and contemporary sensibility. We focus on mishmash styling, thinking about how we can show our design and sensibility through images. We call it the edit process, like a magazine,” the cofounder said of the brand’s final, articulated vision.

For spring 2017, Ader’s theme is “futro — it means retro with future, mixed” — which manifested more in its retail environment than the graphic clothes hanging on the racks of the brand’s Hongdae flagship.

Entering the three-story store, shoppers are greeted by a grand, nihilistic display. Music reminiscent of a superhero blockbuster blares, while an installation of two wrecked cars, piled atop each other, is inlaid with branding materials. Clothing racks share real estate with gallery space, curated from a rotating list of Ader-aligned artists. The full display is ripped up each six months – replaced with new theme materials conceptualized by the crew.

But bigger than Ader’s installations and branding tactics is the social change that the brand has helped herald. In South Korea — where male and female gender roles are well-defined and unrelenting — the success of unisex fashion is somewhat revolutionary.

“Our clothing is unisex and this kind of styling runs counter to the usual Korean dress culture. In the past, so many people felt strange, asking ‘Why do they do that?’ But these days it’s very trendy and people enjoy this kind of styling. We started to change people’s minds — we didn’t mean it at first when we started, it’s a coincidence. Now we are seeing the positive effects of what we’re doing. We feel that these kinds of changes can make Korean fashion more strong,” the cofounder said.

Now with a brand language in place, Ader feels it is ripe for expansion. It has partnered with Tomorrow Ltd. for global distribution — starting with the spring 2018 season. Ader Error’s only current retail outside South Korea is with Tom Greyhound in Paris, as well as two stores in Berlin and Fig Collective in New York. Tomorrow Ltd. feels the brand has exponential market value, but aims to keep Ader’s distribution small and fleeting — capping its stockist list at around 20.

Given Ader’s environmental approach to retail and branding, it will look to establish pop-ups in each stockist it takes on. The first to give this exercise a go will be 10 Corso Como, which will stage an Ader exhibition from June 16 to 20.

Said Tomorrow Ltd.’s Cesare Prevedello, responsible for Ader sales: “It’s all about the brand, it’s not the people designing, it’s not even about the product. We want people to be able to want to review the brand as immersive — all the things that are around you. There is no point to identify the brand with someone or something specific. It’s a new vision for fashion.”

Silvia Bertocchi, 10 Corso Como’s buyer, said of the label: “Ader Error’s clothing has many strong attraction points. We like the idea of a multidisciplinary collective behind the brand, all with different skills and personalities. Ader Error’s clothing is conceived with linear graphics — with details and a kind of imperfection — it’s different.”