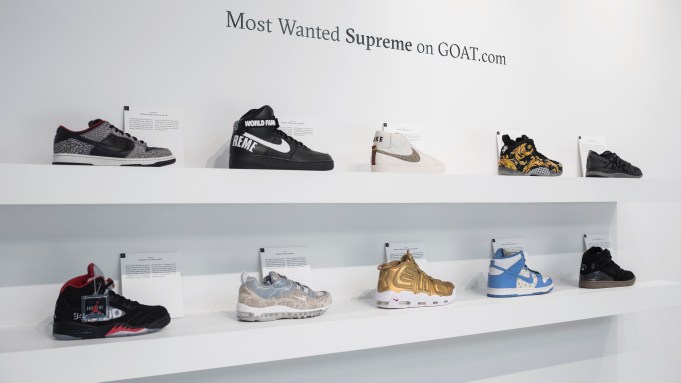 Enter a room full of sneakerheads and not long after eye contact is made with another, that gaze trails down — an uncontrollable reflex — to the shoes.

So it was Thursday night as an intimate crowd filled out sneaker reselling app Goat’s pop-up gallery space at Platform in Culver City to celebrate this month’s exhibit — a nod to New York sneaker culture — and hear guest speaker and illustrator Sophia Chang foster a discussion that ranged from the pitfalls and perks of the recently ended ComplexCon to a culture of exclusivity and a scrappy entrepreneurialism that has come to define streetwear.

“I like inclusive dialogue, inclusive opportunities for people — not the Soho House kind of mentality,” Chang said before the group when someone posed the question of whether it was better for the industry to produce exclusive product versus manufacture with inclusivity in mind. She balanced that sentiment though, singing the merits of limited runs when it comes to footwear specifically.

Chang, a multihyphenate whose work has led her down a path of collaborations with brands such as Puma, Nike, Samsung and Red Bull, is also cofounder of the brand agency We Ascend.

The illustrator and designer led the conversation, first talking about her own rise, but also mused on a question that’s become now standard fare at most panels and gatherings within streetwear related to diversity and, more specifically, women in the business.

“For me I’m just someone who is creative. I like to create things,” Chang said when the conversation turned to the women’s business and the 2014 collection she designed for Puma. “I had a lot of [press] ask me what it’s like to be a woman and design sneakers which, for me in my mind, I’m like, ‘Oh my God. Everyone who’s looking at me sees me as a person of color and a female who made that [sneaker]’ versus, from my perspective, when I look at that [shoe] I’m like, ‘oh, cool.’ I’m a creative person. I was asked to design a shoe so I’m going to do what I do.”

While a good chunk of the conversation centered around ComplexCon — with many lamenting the crowds that seemed to overshadow those who were there for the love of the shoes and the culture around it — the question of whether a bubble was forming with the increased attention on the shoes and broader streetwear category capped the conversation.

Goat cofounder Daishin Sugano — a former analyst — had a thoughtful response for the group, pointing out his team had crunched the numbers in an exercise to study if a bubble was in the midst of forming.

“Any kind of bubble, you see irrational behavior that’s not sustained over time, but when we track all [Yeezy] V1s let’s say that were released, they’re actually all, yes expensive prices out of the gate and came down, but then they show growth over time. But it’s gradual growth. It’s sustainable growth, which is not a sign of a bubble….Things are cyclical. Let’s say if something were to burst, it bursts because it’s oversold. Then there’s a correction, but we’re not seeing it right now. We’re seeing a lot of interest over time and I think more people are coming into the market because of things like ComplexCon and now they’re getting interest and they’re building even more demand to carry that wave [of demand] up.”

For Goat, which pulled in $25 million earlier this year, the rapid expansion of its business only serves as further proof of an upward trajectory, with talks such as those at the pop-up space a showcase of the interest in the culture. That raise was preceded by $5 million the company closed on in the summer of 2016. It was only a year prior to that when Sugano and buddy Eddy Lu founded the app after tinkering with a few other ideas: a social dining app and later app-based games.

The idea was spurred after Sugano bought a pair of Air Jordan 5 Grapes on eBay that turned out to be fakes. After that burn and the loss of $250, Sugano felt there was a problem he and Lu could solve.

The Culver City, Calif.-based company approaches the business of reselling like that of a retailer. It closely manages its marketplace of sellers, merchandises product by displaying only the lowest price (as opposed to bombarding shoppers with every possible listing) and repackages all shoes in Goat packaging to ensure consistency of brand. It’s worked, with the company now counting more than 100 employees, servicing in excess of 4 million users, with 20 percent of that base women and growing.

“This stuff fits within streetwear and sneaker culture because as a sneaker enthusiast you’re looking and asking, ‘Can I even wear that?’ and you’re like, ‘Yes.’ So because you can see that [pairing of streetwear with luxury] and you can see cues of high fashion coming into this [industry], you’re going to see a lot more overlap….I wouldn’t say it’s a trend,” Sugano told WWD. “I think people are always inspired by different designers from all walks of life and it just so happens now you’re coming in on a time where these high-fashion designers were actually inspired by sneakers from back in the day. It’s not the other way around.”

Given streetwear’s momentum, would the company ever consider category expansion? Goat’s management team appears focused on staying in its own lane, with Sugano confirming no interest in expansion beyond footwear.

“We believe in sneakers. Obviously you can see these parallels within clothing and whatnot, but we’re so well equipped to operate in this area,” he said. “We think that sneakers is a huge industry.”

Wildfox Hits Back at H&M with Trademark Infringement Lawsuit