Madhappy Leaps Into Aspen on a Cloud of Positivity

The brand promotes local businesses through its collaborations.

Madhappy’s brand of streetwear and optimism, along with its commitment to continuing the discussion about mental heath, has arrived in Aspen, which is a pretty positive place to begin with. This is Madhappy’s third pop-up shop in the high-end winter vacation spot.

“Aspen became part of the brand DNA in a lot of ways. We got a good, interesting deal when we opened in old Boogies,” said Madhappy cofounder Joshua Sitt, referring to the previous incarnations at Boogies Diner, a popular eatery that closed in 2015. “We’re now at Hunter and Hyman across from Christian Louboutin and Oliver Peoples. This is our best design and buildout.”

The Aspen pop-up, which will operate through Jan. 7, has a minimalistic aesthetic with products displayed like art in a gallery. The store was inspired by the Good Design period, which was popular in the U.S. from 1944 to 1956 and focused on the usefulness of products and materials while stripping away the superfluous.

Madhappy’s 11th pop-up, or experiential store includes a Madhappy wall, which is a blank canvas for shoppers to share what makes them “Madhappy.” “It’s the simplest thing,” Sitt said. “It’s an engaging, fun way to get people to start to think about what makes them happy.

“We continue to introduce the brand to new people, so that they can go home and talk about it and continue to spread the word,” Sitt said. “Everyone else is spending money on paid influencers and digital marketing. Our pop-up stores have been the biggest generator for us.”

Madhappy has found success by growing organically and partnering with local businesses. “We try to collaborate with different local people. We’ve done [hoodies] with Jon and Vinny’s and Apple Pan in L.A.” 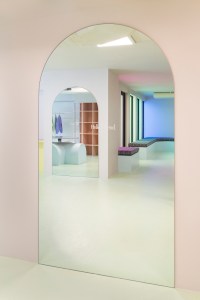 Madhappy partnered with Aspen Snowmass for an exclusive product release — alas, it’s already sold out — as well as  programming and philanthropy. The brand is donating proceeds from its Four Mountains collection to Mind Springs Health, which aims to provide access to quality mental health and substance abuse services, enhance recovery and resilience in individuals family and communities.

“We’re not mental health professionals,” said Sitt. “We’re a safe space where you can come in and talk about how you feel. Nobody is perfect, but you can try to be a better version of yourself. We’re not going to solve mental health. We want to add our piece. We’re the same age as the people following our brand. We’re not 50- or 60-year-olds talking about mental health. What we’re feeling, everyone is feeling.”

Madhappy is also partnering with Paradise Bakery, a local pastry shop with deep roots in the community. “We’ve been going to Aspen for 20 years and we would go there every morning,” said Sitt, noting that proceeds from the collaboration have been donated to The Buddy Program, an organization that empowers youth to achieve their full potential through mentoring experiences.

“Everything sells out the day we release it. It’s so organic. Rather than targeting the biggest brands in the world, we created this niche following that’s become obsessed with what we’re going to do next.”

Madhappy pop-ups are also operating on Melrose Place in L.A. and SoHo. The stores, like the Aspen unit, are inspired by the Good Design period. The SoHo pop-up on Howard Street features aluminum fixtures and pastel colors throughout, along with chairs by Ray and Charles Eames. The space is also has the Self-Reflection Chamber installation that first appeared at the Melrose Place pop-up shop. “Howard Street is a powerful street,” said Sitt. “We’re next to Reformation and Glossier. It’s where we hit our sweet spot.”