Mike Amiri to Bring His Version of Luxury Retail to Maxfield

The Los Angeles designer, known for his classic rock aesthetic, is the next in line for Maxfield’s pop-up series. 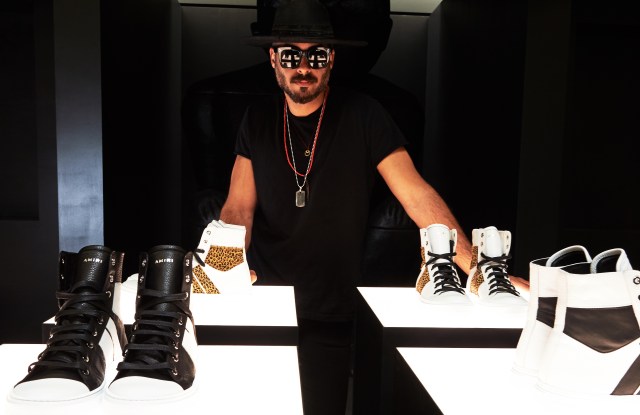 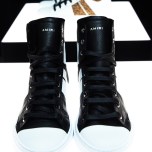 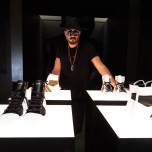 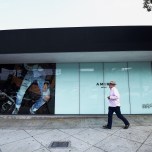 It’s full circle for designer Mike Amiri on the eve of his Los Angeles atelier’s pop-up shop opening at Maxfield.

The West Hollywood concept boutique last fall began a temporary shop series that kicked off with Fear of God and more recently brought in Vetements in February. Now Maxfield, Amiri’s first retail partner, will help the brand launch its first pop-up shop in the 2,500-square-foot former gallery of founder Tommy Perse’s vintage furniture collection, located directly across the street from the main store.

“We are excited to see the global success that Amiri is reaching and that our strategy of launching young, talented designers is omnipresent,” said Maxfield chief branding officer Peter Utz. “Amiri has grown to be one of our strongest designers for men’s. Our main target these next few months will be to increase the awareness of Amiri’s women’s collection. The pop-up stores are an exciting moment for both Maxfield and Amiri.”

“For me, the brand is really personal. It has my name on it. It wasn’t meant to be a big business brand,” Amiri said. “It was meant to be something special in the market and, as a designer in Los Angeles, Maxfield represents the ultimate gallery to display your work. That’s always been the iconic shop. They were the first one to support me and I stayed with them almost the first year exclusively.”

Amiri, launched in 2014, is sold in more than 100 boutiques and currently shows exclusively in Paris.

The pop-up space bows Friday and will remain open through June 30, representing the first time the Los Angeles atelier, known for its classic rock-inspired denim and jackets, will be able to show its full range. It will also be the first time the line shows accessories with bags, backpacks and scarves. There will be limited edition and specially made items, such as a small handbag replica of the well-known Maxfield shopping bag and a small-scale version of Maxfield’s monkey statues donning Amiri’s signature sunglasses and hat. The company said it’s working on deals to infuse iconic L.A. hotspots into the store, although it was largely tight-lipped on details beyond that, saying it was still in negotiations.

The actual shop’s design is in keeping with its former use as a gallery, but turned on its head. The walls are all black, with mirrors everywhere. A nine-foot replica of the Maxfield money statues across the way at the main store is at Amiri’s shop bejeweled in a black crystal effect to mirror the Swarovski details on many of the pop-up’s items.

“If you’re going to do something, especially image-wise for the brand, it should be right and not just ‘Let’s do a pop-up and collect as much money as we can,’” Amiri said. “That’s the current landscape of a lot of pop-ups: pop up here for four days and kids stand in line and they go in and [companies] cash out. I understand there’s a consumer for that but, for me, I wanted it to be an experience and have the clothes highlighted. You want to create this mood. You want someone to explore.”

The Maxfield pop-ups that Amiri is following have historically brought customers in droves, with the tell-tale lines out the door more commonly found at streetwear’s mecca on Fairfax Avenue. So does Amiri expect the same when his store bows?

“A bit, but the Amiri customer’s a bit different because we cross over between youthful street to high fashion,” the designer said. “I think there’s this street customer that really wants to collect every T-shirt and we have that customer, but we have their older brother and their dad, which is the most remarkable thing about the brand. People don’t buy into this hype thing; they just buy into the brand. I don’t want people to come in to buy that T-shirt and throw it on eBay.”

“It’s less of a streetwear customer and more of a luxury consumer globally [who shops Amiri],” said Amiri vice president Mike Abe. “Yes there are professional athletes who wear us, but we have a lot of rock stars and [high-net-worth individuals] from Asia and the Middle East. They want something special and new and a different story.”

The idea of an Amiri-branded boutique has been batted around by the team, but they’re cautious about jumping into the fray.

“A lot of businesses are suffering and we feel like they’re suffering because they are unable to give their consumer an experience, whereas retailers who can give some sort of experience are thriving in a challenging market,” Amiri said. “So if we were to open a store, it would definitely be something different than the current luxury shop.”

“When you talk about new luxury and new experiences, it doesn’t have to be on this main [street],” Abe said. “It doesn’t have to be on Rodeo [Drive] or a Wooster [Street] in SoHo. It can be a little bit off the beaten path. People want a story. They want the mystery beyond ‘This is a beautiful shop and I hit you with everything.’”

Shifts in both the retail and, more specifically, the luxury industries, are changing how the latter segment is defined. That has allowed brands such as Amiri to grow so quickly. The designer cited factors such as social media as helping level the playing field, along with changes in what that global luxury consumer is looking for as specific drivers fueling the shift.

“A brand like Amiri, made in Los Angeles that’s three years old, would not have grown so fast if the luxury market hadn’t changed. People are constantly exposed to product. Showing a handbag that anyone could get anywhere in the world doesn’t correlate to something special and unique as much as it did before,” Amiri said.

For More on Maxfield in WWD:

Maxfield Aims for Cool on Melrose

Taking Them to the Cleaners: Vetements x Maxfield Event Draws Crowd, Sells Out of Merchandise