If you were anywhere near Bryant Park just after dawn on Friday, you probably saw them: herds of little girls, skipping down sidewalks in denim HotPants. 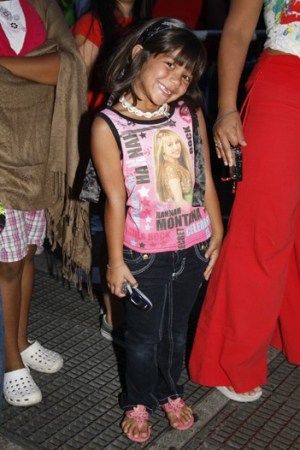 If you were anywhere near Bryant Park just after dawn on Friday, you probably saw them: herds of little girls, skipping down sidewalks in denim HotPants, clutching their mothers with one hand and a homemade sign with the other, glitter trailing in their wakes. The tweens — along with a number of their stroller-bound siblings and coffee-swilling parents — had descended on Midtown by the thousands, many having risen as early as 3:30 a.m. to see Miley Cyrus strut onstage for the “Good Morning America” summer concert series. As a line snaked around the park (“Just because you’re pregnant doesn’t mean you can cut!” shouted one police officer to a sneaky mom), Cyrus’ pint-size fans compared carefully selected duds and hummed tunes from their heroine’s new album, “Breakout,” due out on July 22. “She sings the best songs ever,” sighed Amanda Cristo, 12, who had trekked from the Bronx and had chosen a pair of black leggings and a white tunic with silver sequins (“Miley wears a lot of sequins,” she explained). “I just love her music, and she’s so real,” said Marlena Prast, 13, from Wallingford, Conn. Prast was wearing what appeared to be the uniform of the day: denim shorts (cut high on the thigh), a jersey tank top and bejeweled flip-fl ops, topping off the look with a pair of white plastic sunglasses. “She dresses like this all the time,” her father said, though Prast noted that, since she wears a uniform to Catholic school during the year, this particular outfit was special. “I picked it out two nights ago,” she said.

Elsewhere in the crowd, sisters and best friends nervously huddled together, comparing Mileyemblazoned shirts. “I got this from Limited Too,” explained Sarah Norris, nine, from Chester, N.J., of her Cyrus T-shirt, which she paired with a flowered miniskirt. “My mom took me shopping for it.” Fiveyear- old Naia McGinn, wearing a bright pink Miley T and ruffled pink miniskirt, quietly sang Cyrus’ hit song “The Best of Both Worlds” into the ear of her blonde Miley Cyrus doll; of her outfit she said, “My mom picked it out.” Clad in a white T heat-pressed with Cyrus’ smiling face and dusted with pink sparkles, Kaitlin Miller, eight, from Connecticut, said she takes inspiration from her bedroom wall when planning outfits: “I have two posters of Miley at home, and I like to look at her clothes,” Miller said. “They’re, like, springy and bright.”

This story first appeared in the July 21, 2008 issue of WWD. Subscribe Today.

If the preteen set was uncomfortable with Cyrus’ recent controversial photo shoot by Annie Leibovitz, you wouldn’t know it by talking to them (“Mommy, what’s Vanity Fair?” asked one nineyear- old, a purple boa tied around her neck). “She does the right thing at a young age, and she doesn’t have a big head,” said Kelsey Graham, 13, from Williamstown, N.J. “I like her because she’s a good person.” Kayla Vera, 10, from the Bronx, who wore a sequin-covered newsboy cap she bought at Claire’s, took Cyrus’ appeal a step further. “She, like, expresses herself by saying nobody’s perfect,” Vera said. “She’s saying that even she’s not perfect, so you don’t have to be, either.”

Being of driver’s-permit age didn’t stop a slew of teens from showing their Miley love (the singer herself, after all, turns 16 in November). “Her songs are different,” said Anna Blazejowskyj, 16, while Brianne Strnad, 15, adjusting her pearl necklace, said, “I really like her TV show.” As the line slowly inched forward and chatter turned to Cyrus’ own wardrobe (“Miley can wear, like, a yellow sock and a red sock,” Vera explained solemnly to the friend next to her, “but she still makes it look supergood”) a gaggle of just-arriving adolescents, their hair pulled into matching side ponytails, stopped, stared at the crowd before them, and began to wail. “Next time,” muttered a father as he tugged the girls along, “we’re getting here the night before.”