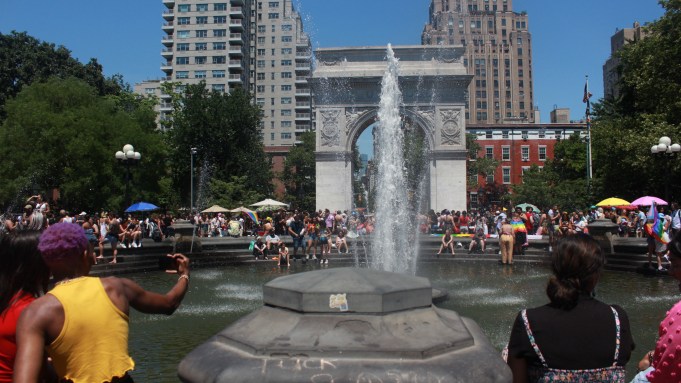 NEW YORK — Many Americans took to the streets to find light and pride at the end of the tunnel after a devastating blow to women’s rights this week. And a hint at further threats to LGBTQ rights, too.

On Sunday morning, NYC Pride’s official march began, tracing Fifth Avenue from 26th Street to Eighth Street before curving off at Christopher Street. Historic sites like the West Village’s storied Stonewall Inn, the epicenter of the gay and transgender rights movement in 1969, saw heavy police presence and barricades to usher dense, colorful and sweating crowds along in the 90-degree heat.

Corporate messages like “we stand proud” wrapped around corner bank awnings and leftover signage like “Freedom is for Every Body” or graffitied messages denouncing the Supreme Court of the U.S. were smattered among rainbow flags. In Washington Square Park, a chant of “My body, my business” rang through amid pulsating music and calls for mixed drinks or $1 water from street vendors.

Youth pride fashions were a mix of denim cutoffs and heat-beating tanks in every hue. Rainbow pin-striped midi dresses, crochet bikini sets and bedazzled cat eyes were also spotted in the crowds. But overall, it was rainbow galore, with flags, fans, bandanas and U.V. umbrellas among the accessories of choice.

Asked whether abortion rights protests were as prevalent Sunday amid Pride festivities, an attendant at a booth for Middle Church, a New York multicultural church participating in the street fair on Fourth Avenue said, “For the most part, it’s been all about Pride.” The booth was giving away an array of free T-shirts celebrating transgender, bisexual and queer identities for Christians.

Elsewhere, in cities like Seattle, San Antonio, Texas, Washington, D.C., and more, people gathered together with feelings of solidarity as well as hesitation for potential rights roll-backs. In cities like Los Angeles, an abortion rights protest on the freeway was the demonstration of the day.

“I’m marching in D.C. in honor of the women who can’t march alongside me, especially for the Appalachian women in my community whose lives are at stake due to this SCOTUS decision,” Mya Marie Gallo, a Giles County, Va., resident, told WWD.